Numuhukumakiaki'aialunamor, shortened to Lunamor or simply Rock, is an Unkalaki on Roshar. He was the fourth born son in his family and received combat training per Unkalaki customs; however, one of his brothers died, making him the third son and a craftsman instead of a warrior.[1][2] He calls himself Rock because he doesn't believe others can pronounce his real name, which is actually a poem about a very special rock his father discovered the day before Rock's birth.[3] The poem roughly translates to "I saw a beautiful wet stone that no one is paying attention to, but it was really cool because of the water pattern on it".[4] 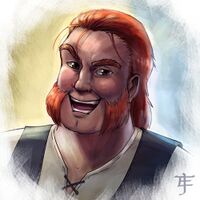 Rock is a large man. He is nearly seven feet tall with thick limbs and a powerful torso. He has tan skin and deep red hair.[5] When he can shave, he leaves long, red-blond sideburns, but shaves his chin and lip.[6]

He is quick to laugh. He is a jovial man, generally liked by people around him. He is extremely respectful to spren, to Syl's delight and Kaladin's annoyance.[7]

He can see spren, or mafah’liki in the Unkalaki tongue, in the Physical Realm even when they do not want to appear to him. Horneaters call people with this ability alaii’iku. It is implied there are other people like him. Rock has given conflicting reports on the origin of his blessing, saying that he was born with it but also that the waters of life are involved with him having this ability.[8][9] In addition, he can slightly perceive the form of spren in the Cognitive Realm, as when he perceives the larger aspect of anticipationspren in Shadesmar.[2] His alaii’iku condition doesn't grant him a privileged position within Unkalaki culture, as Rock is still bound to his duty towards his nuatoma, and it didn't prevent him from having to do the work of a fourth son, and later that of a third son.[2]

Rock can also listen to a faint beat his mother used to sing to, an ability reminiscent of singer Rhythms but of unknown relation. It is also unknown if this is a consequence of him being alaii’iku.[2]

He is quite proficient in archery, though he refuses to fight because being a soldier is not considered an esteemed profession in Unkalaki culture.[1]

Rock is also incredibly strong even considering his large and powerful frame, as he was able to use a Shardbow with proficiency on what must have been his first try. These bows are described as having draw weights so huge that only men in Shardplate could use them. His daughter mentions that in the past, spren "strengthened his arm when he drew the Bow of Hours in the Peaks," which may provide an explanation;[10] it is unclear which spren were responsible for this.

Along with Lopen and Huio he is one of the only members of Bridge Four that can swim.[11]

He traveled to the Shattered Plains with Kef'ha, his nuatoma, in the hopes of gaining Shardplate and Shardblade for his people. Kef'ha challenged Torol Sadeas to a duel because he believed it would be easier to first gain the Shardplate, then try for a Shardblade. After Sadeas won and killed Kef'ha, Rock and his entourage became servants to Sadeas.

Sadeas used Rock as a cook. Rock prepared one meal for him in which he put chull dung in the soup and the bread, used it as a garnish on the pork steak, and made a chutney out of it for the buttered garams because he was angry about Kef'ha's death. He was then sent to the bridge crews[7] and became a member of Bridge Four. 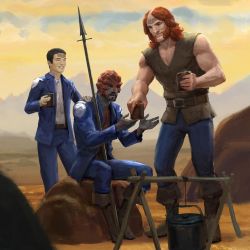 by Derek Murphy
Rock the cook

Rock joined the bridge crews in early 1173 and spent several months there before Kaladin was appointed his new bridgeleader.[2] The next morning when Kaladin claimed that Bridge Four would never lose another man, Rock laughed at Kaladin and refused to practice carrying the bridge.[5] Rock bet the other bridgemen a few chips that Kaladin was carrying a lightweight board to practice and was surprised when he was proven wrong. Later that day on a bridge run, Kaladin took Rock's place at the deathpoint of the bridge during the final approach. Rock was surprised by Kaladin's decision, but accepted. After the bridge was placed, Rock took shelter behind a rock formation. When Kaladin struggled to save an injured Dabbid, Rock followed and carried the man back to shelter himself. He and Teft went out again to save a badly wounded Leyten as well. After Kaladin had treated them, Rock warned Kaladin that injured bridgemen who could not walk must be left behind and that Gaz would not allow them to save Leyten and Dabbid.[12]

Later he offered some of his food to feed the wounded and helped Kaladin gather the antiseptic called knobweed sap.[7] They sold some of the knobweed sap they gathered, and with the money they gained they bought supplies so Rock could cook for Bridge Four. After this, most of the bridgemen started training with Kaladin.[3]

While Kaladin was recovering from being strung up in a highstorm, Rock was made the bridgeleader of Bridge Four. However, the crew just called Rock squadleader and called Kaladin their captain. To thank him for his cooking, Bridge Four bought him a razor, which made Rock actually grow teary-eyed. He was very grateful for it,[6] and he started shaving the beards of all the members of Bridge Four.[13]

After the Battle of Narak, the members of Bridge Four gained the ability to Invest stormlight. Following Kaladin's departure to Hearthstone, however, this ability was lost. Upon his return, Kaladin took Bridge Four to the Shattered Plains to practice using their Radiant ablities. Hobber, Rock's assistant, was able to restore his Shardblade-cut legs and walk. Shortly after, they investigated a pillar of smoke in the distance. The pillar was revealed to be flames from a Voidbringer attack on a caravan whose uninjured members were revealed to be Rock's family: his wife, referred to as "Song", his son Gift, daughter Cord, son Rock (whom he noted was named for a different kind of rock and told Bridge four to call Little Rock), a third son, Star, a daughter named Kuma'tiki (a kind of shell on the Horneater Peaks), and his last daughter, Beautiful Song.[2]

“I made that choice because you are worth that sacrifice. But it is no sacrifice unless I now go, as is right, to seek justice from my people. I would leave with your blessing. But I will leave either way. ”

—Rock to Kaladin before leaving[14]

After letting his family have some time to rest, Rock departed back for the Horneater Peaks with part of his family, taking his wife and younger children with him. He told Kaladin that he had broken the ways of his people, and must face justice for his actions. He asked for Kaladin’s blessing, and Kaladin gave it. Skar and Drehy went with Rock and his family as an honor guard, as well as to fly and protect them on their journey. When Kaladin asked if he’d see Rock again, Rock told him that when they next saw each other, it would not be in this life.[14]

“We take to the skies, Stormblessed. ”

“Rlain, is okay to throw things at Eth. ”

“Take everything you have, and put him in pot. Don't let anyone airsick touch seasonings. ”

This article is still missing information. Please help The Coppermind by expanding it.
Retrieved from "https://coppermind.net/wiki/Lunamor?&oldid=165912"
Categories: