The Battle of Thaylen Field is one of the first major engagements in the True Desolation. It's fought between the human armies, led by Dalinar Kholin, and the Voidbringers, mainly Fused, under direct command of Odium.[2] 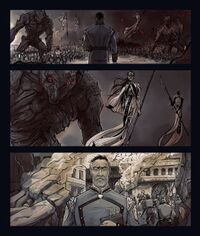 by Marie Seeberger
Human and singer forces facing off

Several thousand Singers arrived at the shores of Thaylen City under the protection of an Everstorm, spawned by Odium to mask their invasion and hasten their ships.[2] As sailing during a storm was considered impossible, the human defenders of the city were caught unaware; furthermore, due to Taravangian's manipulations,[3] much of the city's defense force had departed it shortly before, leaving only the Thaylens and a portion of Alethi army under Meridas Amaram. The Everstorm covering the advance of the enemy stalls over the city instead of continuing on,[2] something never seen before.[2]

At the same time, the souls of approximately ten thousand singers gathered outside the Thaylen City Oathgate in Shadesmar.[4] Due to the stalled Everstorm, the Voidbringer souls were able to pass into the Physical Realm, with two going into the ground and ripping themselves free to become thunderclasts. In addition, clad in a body made of golden carapace and clutching a regal scepter, Odium himself stepped onto the shore to personally lead the battle.[2]

Even with such might backing them, some of the Fused expressed doubt over their chances of victory, largely due to the inexperience of their army of freed Parshmen, many of whom did not want to fight at all.[2] With Amaram's forces being veterans of the Shattered Plains campaigns, the battle was believed to be winnable or even favorable to the humans. Odium, however, had different plans. 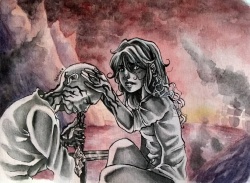 by Damako Art
Lift and Szeth on the battlefield

In the form of blood red mist, occasionally manifesting into images of combat, the Unmade Nergaoul took to the battlefield and filled Sadeas troops with the Thrill, imbuing them with bloodlust and the urge to fight above all else. It was then that the voidspren that had come through the Oathgate into the physical realm seized new hosts, possessing humans as they could normally do to singers; something that had never happened in previous desolations. With this, the Alethi army turned against the city they were supposed to protect.[2]

At the same time, Odium ordered one of the thunderclasts, Yushah, to assault the Thaylen Gemstone Reserve to deny the enemy the King's Drop, a perfect gemstone capable of capturing an Unmade. Yushah breached the wall and broke apart the entire building, scattering all the gemstones onto the battlefield.[5][6]

Taking his copy of The Way of Kings under his arm, Dalinar Kholin went alone to meet the enemy.[6] Before the Azish forces left the city, sailing to Vtlar Cove to wait out the storm, Lift attacked her guard and snuck back to the city, since she was unwilling to abandon the others. When she reached Dalinar he instructed her to track down and recover the King's Drop from the Fused who had taken it.[7] At the same time, Szeth, hovering above the city along with Nale, chose to swear the Third Ideal of the Skybreakers, picking Dalinar as the ideal to follow. With this, he joined the battle, unsheathing Nightblood to bring its full might onto the enemy and aid Lift.[7][8] 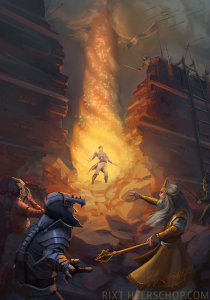 Despite the powerful combatants involved on the human side, Odium's forces were winning. Odium and Dalinar met in the midsts of the battlefield, with Venli observing as Dalinar challenged Odium to the contest of champions to have a chance at saving the city. Odium agreed, then explained how he had been grooming Dalinar for years to become Odium's own champion.[8]

With this, Odium unleashed the full might of the Thrill upon Dalinar, bombarding him with pain of his past actions and promising reprive if Dalinar gives in.[8] Dalinar, however, refuses, accepting the responsibility instead. With this, he managed to attain the next Bondsmith ideal, declaring "I am Unity" and summoning Honor's Perpendicularity.[9] All three realms, physical, cognitive, and spiritual were united in an outpouring of gloryspren and Stormlight, infusing every gem in the city and forming a passage to Shadesmar. His allies trapped there -- Adolin, Shallan, and Kaladin -- use to return to the Physical Realm and join the fight. By contrast, seeing Dalinar's feat, Odium fled, leaving his armies to fend for themselves.[9] 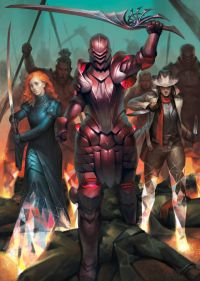 Shallan, using Lightweaving, created an illusory army to distract the Sadeas forces, even managing to give the phantoms some substance. Meanwhile, Jasnah used the near-infinite Stormlight to annihilate the enemy forces with Surgebinding, while Renarin, having revealed his corrupted spren, rushed to join the fight.[9]

In the center, with Dalinar no longer a possible ally, the sphere containing Yelig-Nar went to Amaram, who attacked Dalinar, only to be rebuffed by Kaladin.[9] Amaram then chose to bond Yelig-nar by swallowing a gem, growing grotesque carapace under his Shardplate and gaining access to all ten Surges.[10]

With Kaladin handling all threats to Dalinar, the latter made his way into the center of the red mists that made up Nergaoul. In the sky, Szeth, with the help of Lift, had finally acquired the King's Drop, but was immediately tailed by numerous flying Fused. Unable to escape them, he and Lift devised a strategy to fool them, and, with Shallan's help, created a fake King's Drop, which they then allowed the Fused to "steal" back. With the perfect gemstone thus secured, Lift entered the mist to bring it to Dalinar.[10]

Meanwhile, Adolin, with the help of his Shardblade Mayalaran and Thaylen highguard Hrdalm, engaged Kai-garnis, the other thunderclast, near the city's Oathgate.[10] Though Adolin managed to seriously wound the creature, he eventually sustained too many injuries to fight effectively. It's then that Renarin arrived with healing and his own Blade. He and Hrdalm, the latter armed with Mayalaran, finally managed to bring the beast down, reducing it to inanimate stone. Renarin then made for the Oathgate, only to see it guarded by a dozen flying Fused.[10] 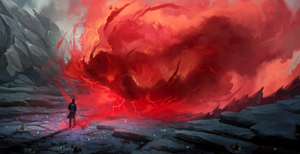 Over in Urithiru, a surprise attack aimed at distracting the Alethi from sending reinforcements had been underway until Teft managed to speak his Third Ideal and manifest a Shardblade, allowing him to open the Oathgate to Thaylen City and bring in much-needed reinforcements. There, the light of the activated gate momentarily scatters the Fused giving the new arrivals an advantage of surprise.[10] At the same time, back at the ships the singers had arrived upon, Venli bonded Timbre, becoming the first singer Surgebinder.[10]

Within Nergaoul's mists, Lift reached Dalinar and delivered the King's Drop. Embracing the Thrill, Dalinar lured Nergaoul in, and used the Drop to trap him, removing him from the battlefield. With this, the soldiers of Sadeas' army returned to normal, either fleeing or collapsing in place.[10]

Outside, Kaladin's battle with Amaram was still underway. He's almost killed after he runs out of Stormlight, but is saved by Rock, who killed Amaram with two shots from a Shardbow. With their last major fighter gone, Odium's army retreated, while Kholin forces and the Windrunners swept the city of the last invaders. The day was won.[10]

This article is still missing information. Please help The Coppermind by expanding it.
Retrieved from "https://coppermind.net/wiki/?title=Battle_of_Thaylen_Field&oldid=153072"
Categories: