Bridge Four is the name of a group headed by Kaladin Stormblessed, an Alethi Knight Radiant of the Order of Windrunners. The group was originally one of the bridge crews of the Sadeas warcamp in the Shattered Plains, hence the name, but its function has evolved over time, becoming both Dalinar Kholin's honor guard as well as a military unit within a battalion of the Kholin army, then later becoming a group largely consisting of Kaladin's squires and Knights Radiant loyal to him. Despite such drastic changes, the members still refer to themselves by their original bridge crew name, and have even kept their old bridge with them.[1]

Their insignia, designed by Kaladin, is made up of the glyph vev (meaning the number four) suspended above the glyph gesheh (meaning bridge), stylized as a bridge spanning a chasm.[2] 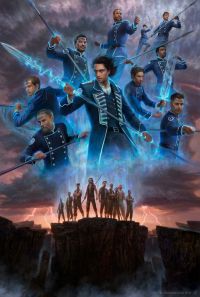 “It appeared that he'd been wrong. There had been something more they could do to him. One final torment the world had reserved just for Kaladin. And it was called Bridge Four. ”

Notorious for its bad luck, Bridge Four of Torol Sadeas' bridge crews seldom kept a bridgeleader for more than a few days[3] and almost always took the highest casualties on bridge runs.[4]

A transfer to Bridge Four was often used as a punishment for bridgemen,[5] and the existence of a group worse off than themselves was a mental control used by Sadeas' men on the rest of the bridge crews. As a result of this, the bridgemen in Bridge Four knew that nothing worse could be done to them, and put no effort into anything. They didn't tell each other their names or anything else about themselves.

Upon arrival at the bridge yard in Sadeas' warcamp Kaladin managed to earn the immediate enmity of Gaz, the bridge sergeant in charge of the bridge crews, who then placed him in Bridge Four.

by Marie Seeberger
Gathering around campfire

“As they hefted their bridge, a spontaneous round of cheering rose up from the other crews. "That's new," ... "Guess they finally realized what we are," Kaladin said. "And what's that?" ... "We're their champions. Bridge forward!" ”

Kaladin, still unaware of his latent powers as a Windrunner, managed to survive the bridge runs even after several weeks, and eventually decided to protect other members of Bridge Four and become their bridgeleader.[5] Using both his medical and military knowledge, he quickly turned the crew around. His efforts in building morale and instilling discipline led to better organization.[7] He found ways to treat wounded crew members, saving many lives.[8] Soon enough Bridge Four was having the fewest casualties among the bridge crews. However due to Kaladin's selfish tactics in one particular battle, every other bridge crew suffered heavy casualties and the battle was lost due to Kaladin instructing his bridgemen to use their bridge as a shield. The other bridges were shot at more by the Parshendi. Kaladin's bridge was one of the only ones that made it to the chasm. Kaladin was punished but Bridge Four remained by his side even upon his near death.[9] 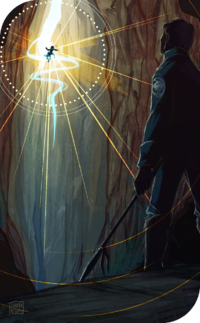 by taratjah
Training with Kaladin in the chasms

Despite their huge gains, the treatment of the warcamp's lighteyed officers towards Bridge Four did not improve, and in fact even worsened. Kaladin started thinking of escape, not just for himself, but for the rest of the crew.[10]

After careful and lengthy preparation that involved training the bridgemen to fight and obtaining necessary resources, and just when they found an opportunity to set their escape plan into motion, Kaladin and Bridge Four found themselves unexpectedly thrust into Alethi politics when their highprince Torol Sadeas betrayed Dalinar Kholin during the Battle of the Tower, leaving the latter outnumbered by the Parshendi army they were battling. Being a part of the Sadeas army, Bridge Four witnessed the betrayal.

Despite not having any allegiance to Dalinar, and sacrificing their opportunity to escape, Kaladin chose to rescue the highprince and his army.[11][12]

For this, Dalinar gave Sadeas Oathbringer, his Shardblade, in exchange of the freedom of every single bridgeman in Sadeas' warcamp.[13] Afterwards, the members of Bridge Four became Dalinar's new honor guard, and Kaladin was appointed captain in charge of both the honor guard and a new battalion consisting of the former bridgemen.[14]

Skar and Moash were both tasked to focus on Bridge Four's bodyguard duties.[15] 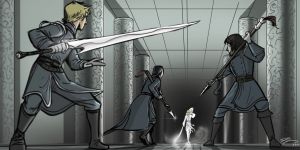 Initially they were given Cobalt Guard uniforms, but they rejected the idea of being part of that group. They even mutilated their uniforms, cutting off the Cobalt Guard insignia, which was later replaced by Bridge Four's own insignia.[15]

Members of Bridge Four started becoming Kaladin's squires soon after he spoke the Third Ideal of the Windrunners.[16] This gave them access to Stormlight and the Lashings (Surges of Adhesion and Gravitation). Because of this Dalinar considered them too important for guard duty, so that was given to other bridge crews instead.[17]

From then on Bridge Four focused more on training their Surgebinding abilities, recruiting potential squires, and performing more crucial assignments for Dalinar. Their abilities disappeared whenever Kaladin was too far away, so Dalinar gave them the Windrunner Honorblade to use for training in such cases.[18]

At some point, Teft and Lopen bonded honorspren to become Knights Radiant.[19] Other Bridge Four members may have already done the same.

Teft, who reached the Third Ideal as well, received squires of his own from another bridge crew, namely Bridge Thirteen.[20]

Surviving members who've been in Bridge Four since the bridge crew days have glyphs for "Freedom" and "Bridge Four" tattooed on their person. The "Freedom" glyph is usually a mark of a freed slave.

by Isaac Stewart
The portion of the glyph meaning "Bridge Four"

In Alethi society, slaves are often branded with a mark of slavery on their forehead to make their status apparent to anyone who sees them. A freed slave is given a writ of freedom, but he could also cover his slave brand with a tattoo indicating details of his freedom in order to lessen potential misunderstandings.

Shortly after moving to Dalinar's warcamp, Kaladin hires a tattooist to give a Freedom tattoo to those Bridge Four members who'd been slaves. The first one to get it, Hobber, insists on having glyphs for "Bridge Four" added to the tattoo as well, as a statement of loyalty and gratitude towards Bridge Four. The rest of the former slaves copy him. As a gesture of solidarity, even those who didn't have the slave brand request for the same tattoo as well, although Moash opts to have the tattoo placed on his left shoulder instead of his forehead.[15][21]

Somehow the ink keeps on melting away from Kaladin's forehead when it is his turn to be tattooed. This is why Kaladin, whose own slave brand has not been healed even after using Stormlight for so long, does not have the tattoos. The reason for this is not completely certain. After speaking the Fourth Ideal, Kaladin's father notices that his scars are falling off as scabs, leaving clean smooth skin behind. 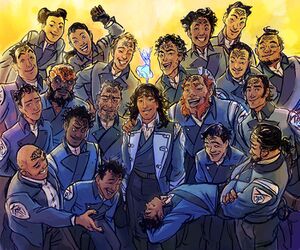 by Marie Seeberger
For a full list of members, see Category:Bridge Four.

This article is still missing information. Please help The Coppermind by expanding it.
Retrieved from "https://coppermind.net/wiki/?title=Bridge_Four&oldid=171294"
Categories: