Skar is a member of Bridge Four and is company second for the Order of Windrunners on Roshar.[1] 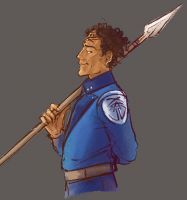 Skar is short and wiry.[2] He has sharp features, and his hair is turning silver at the temples, although he is only in his early thirties. He is never without his spear.[3]

He tends to be stubborn and extremely loyal. He has a lot of faith in Kaladin and his abilities as a Knight Radiant, as well as a strong feeling of identity as a member of Bridge Four.

Skar was one of two bridgemen that instinctively understood the training Kaladin gave them, the other being Moash. He is described by Kaladin as a killer.[3]

Skar tries not to feel sorry for himself. He helps encourage others, such as Lyn, on their journey to become Windrunner squires. This shows that Skar tends to put others before himself.

Skar is a Windrunner of at least the Second Ideal.[1]

Before finding himself on Bridge Four, Skar was a laborer, more specifically a rocksplitter. Wanting more for himself, he aspired to join the ranks of the Blackcaps, Highprince Aladar's personal bodyguards. When Skar approached the Blackcaps to join them, they told him that while they did accept darkeyes, they did not accept runts. After some consideration, the Blackcaps told Skar that if he could outfit himself with a uniform, armor and weapons they would consider letting Skar join. As a common darkeyed laborer, Skar had no money or resources to get the equipment he needed. Thinking that the Blackcaps would see him as resourceful and daring, he stole the necessary gear from the Blackcaps' quartermaster. Instead of being impressed with Skar, they branded him a slave and sold him to Torol Sadeas. Once purchased by Sadeas's army, Skar was quickly put into the bridge crews and he found himself on Bridge Four.[4] 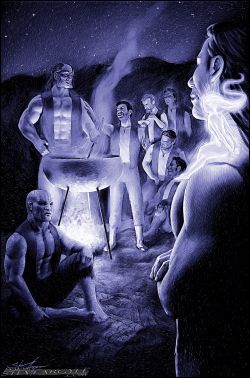 He was one of the first to join in and eat Rock's stew.[5] He became one of the bridge's subsquad commanders.[6] Skar stood watch over Kaladin during his recovery from being hung up in a highstorm.[7]

Skar sustained an injury to his leg during the Battle of the Tower.[8]

After being promoted to lieutenant by Kaladin, he and Moash (the best fighters among the bridge crews) were assigned to guard Dalinar Kholin.[3] When Bridge Four received their guard uniforms, Skar was the first to tear off the Cobalt Guard patch, insisting that they were Bridge Four instead.[3]

At the Battle of Narak, he and Drehy were assigned to guard Adolin. He helped save Adolin from plummeting into a chasm by grabbing and holding onto the steel link skirt of his Shardplate. [9]

Two weeks after the Battle of Narak, of Bridge Four only Skar, Rlain, and Dabbid were unable to draw in Stormlight. Skar tried to not feel sorry for himself, but he worried that he would no longer be useful in Bridge Four. Skar also didn't want the other members of Bridge Four to pity him or to console him; he wanted things to remain as they were and for them to see him as a good solider.[4]

During a Bridge Four training exercise, Skar helped Sigzil and other members of Bridge Four measure and test out the abilities of someone infused with Stormlight. For one test he ran a mile through the markets of Urithiru to the ramp of the Oathgate, comparing his time to Drehy, who did the same run while powered by Stormlight. While waiting for Kaladin to show up and activate the Oathgate, Skar and Teft had a conversation regarding Skar's place in Bridge Four. Skar vented his frustrations to Teft about not gaining his powers, and Teft noted that there was nothing wrong with being on the support team. Skar vehemently disagreed with the notion, telling Teft how long he had waited to hold a spear and get a chance to prove himself as a warrior.[4]

While thinking on his future role in Bridge Four, Skar engaged in conversation with the scout Lyn, who was chosen as a possible candidate to join the Windrunners. Lyn shared Skar's frustration about not being able to absorb Stormlight. Instead of telling Lyn to not feel sorry for herself, he told her the story of when Kaladin first absorbed Stormlight. It was the bridge run in which Bridge Four was a target for Parshendi arrows, and it was getting particularly bloody. Skar was in the second row, and the man in front of him stood beside Kaladin. The man in front of Skar fell, and Skar knew for certainty that he would fall next, as he was then fully exposed. Just as he came to peace with dying, the arrows that were shot at him swerved and hit next to Kaladin instead; Kaladin had drawn the arrows towards himself unconsciously, thus saving Skar's life. Skar asked Lyn why she wanted to be a Windrunner, and she responded by saying that she wanted to soar. Skar told her that that wasn't good enough, that Kaladin wasn't thinking about flying or being left out when he first gained his powers: he was thinking about saving the Bridge Four, about saving Skar. He told Lyn that she needed to make the most of the opportunity, to seize hold of it and try her best. Skar told her that if she didn't and gave up instead, then she had no right to complain. As Lyn was contemplating Skar's words, she sucked in Stormlight. After she did this Skar mused if that was his lot - being a teacher or facilitator to people wanting to become Radiants. Walking over to Rock, Skar asked him if he could help cook, since he probably would never become a Windrunner. While discussing this Rock noted that Skar was glowing. Skar had finally drawn in and absorbed Stormlight, becoming a full squire to the Windrunners.[4]

Skar was chosen by Kaladin to be a part of the mission to travel to Kholinar and assess its current status. On the trip there he displayed some basic understanding of Lashes, as he and Drehy helped Kaladin keep everyone on the mission in the air.[10]

During the Battle of Kholinar, Skar played a big part in the battle, as one of the better warriors in the humans' group. He moved back and forth between fighting with Kaladin to helping protect Shallan as she attempted to fight the Unmade that had infiltrated Kholinar. Skar was not among those on the Oathgate to be transferred to the Shadesmar. It is assumed he and Drehy remained in Kholinar trying to find a way to escape. [11]

After the Battle of Thaylen Field, Kaladin traveled to a cave on a coast in Alethkar on information received via spanreed. Upon entering the cave, he found that Skar and Drehy had survived the Battle of Kholinar, having covered their tattoos and scars with ash. Not only had they survived, they had also managed to protect Elhokar's son and the heir to the Alethi throne, Gavinor, as well as Vathah and the rest of Shallan's followers and a small group of other refugees.[12]

Skar married Ristina, a scribe, and Bridge Four was present at the wedding.[13] He was a part of the expedition to Hearthstone on the Fourth Bridge and fought the Heavenly Ones there along with other Windrunners. Skar volunteered to accompany Rock and his family on their return to the Horneater Peaks, and left about four weeks before Kaladin began working as a surgeon.[14] He was promoted to the role of company second once Kaladin stepped down - this job's responsibilities included overseeing and leading the Windrunners on missions.[15] Once they returned to the Shattered Plains, Skar and Drehy gave Kaladin the news that Rock wouldn't be coming back. Skar returned to Urithiru after the singer occupation ended and was present at Teft's funeral, along with all remaining members of Bridge Four.[16]

This article is still missing information. Please help The Coppermind by expanding it.
Retrieved from "https://coppermind.net/wiki/Skar?&oldid=165533"
Categories: