“Progress is learning to control your world. Put up walls to stop the storms, choose when to become a mate. ”

Eshonai is a listener Shardbearer[4] who lives in Narak on the Shattered Plains of Roshar during the War of Reckoning. She was one of the first Parshendi to come in contact with Gavilar Kholin's soldiers in the Unclaimed Hills.[5] 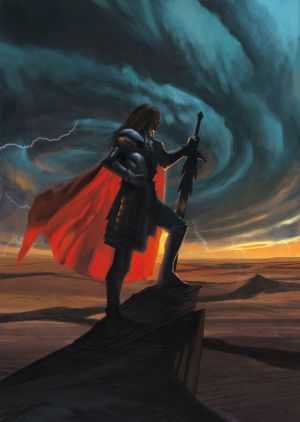 Eshonai is a listener; her skin, covered partially in carapace, is a marbled red and black, and she is large of stature, standing seven feet tall in Shardplate. Her Plate is silver, and has a red cape attached.[4] She wears warform due to the conflict with Alethkar.[5] When not wearing Shardplate, her uniform consists of a cap and a red cloth that stretches over her warform armor.[3]

Her preferred form is workform because it is more flexible[6], limber, rugged, and because the form's aversion to violence forces her to think differently to solve problems. She finds it difficult to tolerate listeners who prefer mateform , and has trouble understanding why anyone would want to remain in that form for longer than necessary to produce offspring. Her confusion on this subject at one time extended to humans, when she was baffled by the fact that humans have only a single form that is easily distracted by sexual urges.[5]

Though she accepts her duties as a general for her people, she feels trapped and constrained by the role, and by living on the Shattered Plains. Even her uniform contributes to her emotional discomfort, and the repetitive tasks of military life numb her mind. She blames her uniform for her personal worries. However she never speaks of her discomfort in her role. She enjoys the feeling of strength she gets from wearing Shardplate, and it gives her something reliable in the world.[5][3]

Eshonai's true passion is exploration, and she yearns to be free of her role as general so she can explore; even as a child, it was common for her to wander off in the middle of a task if something caught her attention.[5][6] She even contemplates exploring human civilizations, though she has a preference for exploring the wilderness. However, she believes these feelings are meaningless in comparison to the importance of protecting her people. She holds that remembering the fallen is important, but of lesser concern than protecting the living. She goes so far as to accompany her strike forces even when she has an injured leg from the Battle of the Tower, because she is the only Shardbearer among the listeners.[5]

She believes that she is personally responsible for the War of Reckoning because she was the first to make contact with the Alethi. Despite being fully aware of the dire predicament of her people, she does not blame the Alethi for their pursuit of vengeance. While she fights the Alethi out of necessity, she would prefer to negotiate a peace with them.[5][3] 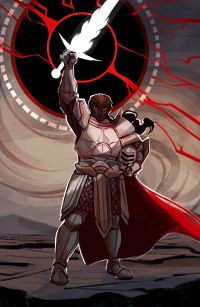 Despite her misgivings about the role, Eshonai is a skilled combatant and military commander, having managed to keep her people alive for more than five years of a war in which they are severely disadvantaged.[5] She's fluent in Alethi, and is the best at it of any listeners, though she speaks it with a thick accent.[4][6]

Shortly before her death, Eshonai attracted the attention of a Reacher nicknamed Timbre; however, she took on the stormform before the bonding process could begin, and only became a Surgebinder moments before her death.[2]

Like all listeners, Eshonai can change her form by taking a spren into her gemheart during a highstorm. Out of preference, she spent most of her life in workform, which, while durable and strong, made her averse to violence. During the War of Reckoning, she uses warform instead, as its carapace and stockier build afford her greater strength and protection while allowing for fighting.[5] Eventually, she takes on stormform, keeping her increased strength while also granting her the ability to cast red lightning and summon the Everstorm, though the latter requires cooperation with more stormforms.[7]

Eshonai is a full Shardbearer, owning both a set of Shardplate and a dead Shardblade.[4] It's unknown how she came about having them, though it's possible she only acquired them after the War of Reckoning began.[4] However that happened, she knows how to use them, and wearing Shardplate feels natural to her.[5] She's highly skilled with the Blade, being able to keep up and even win against Adolin Kholin, though her fighting style is unlike what he's been taught, with no recognizable stances. However, she can get too focused on combat while ignoring her surroundings, which proves to be her downfall.[8]

Eshonai was an explorer who often travelled the wilderness of Natanatan. She started out exploring alone, creating maps and expanding the listeners' understanding of the world, then began leading expeditions during her teenage years, after her adventures sparked interest amongst her people. Her exploration lead to the listeners' first contact with humans in 1165, when she encountering Gavilar's expedition to the south of the Shattered Plains.[3][9] 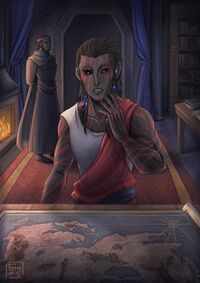 On the day of his assassination, Gavilar spoke to Eshonai privately. She was the first listener to learn that Gavilar wanted to bring back the listeners' old gods. He gave her a dark gemstone and told her to give it to The Five. Taking the gemstone, Eshonai went to the Five and told them of Gavilar's plans, and the group decided to assassinate the Alethi king. Though Eshonai was not yet on the Council of Five, the council gave her a vote and listened to her advice due to her role as an interpreter. She voted in favor of killing Gavilar, in order to keep the listeners free of their gods and to affirm the decision made by their ancestors centuries ago.[3][6]

Sometime between the assassination of Gavilar and the Battle of the Tower, Eshonai became a member of the Council of Five and was made the general of the listener army. After the death of the king, the listeners relocated to Narak in the hopes that a war of attrition would deter the Alethi from pursuing longterm action. Unfortunately, the presence of chasmfiends on the Shattered Plains allowed the war to continue for many years, with the Alethi and listener forces clashing over the beast's gemhearts. Eshonai would sometimes join her troops in the skirmishes over these gems.[5][3]

The Battle of the Tower[edit]

During the battle, Eshonai dueled Dalinar Kholin as the army made its retreat. She defeated him in combat, and recognised him as the Alethi Shardbearer she had been searching for, but was stabbed in the leg by Kaladin Stormblessed, who made his escape with Dalinar before she has a chance to speak with him. As the army made its retreat from the Tower, she saluted Dalinar as a gesture of respect. She allowed the Alethi to escape the battle without attacking them once they clear the Tower.[4] 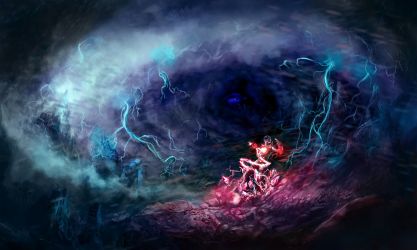 “With enough of us bearing this form together, we could bring it. We could bend the storms to our will, and could bring bring them down upon our enemies. ”

Eshonai was the first to adopt Stormform after it was rediscovered by her sister Venli, though did so reluctantly. The new form caused Eshonai to become more warlike and destructive, leading her to switch from seeking peace with the Alethi, to desiring their extermination. Her new aggressive personality made her more willing to kill disobedient listeners, including her comrades, friends, and family. Any who refused to obey her orders were rounded up by Eshonai, whose intent was to have them killed.[10][3][11][7]

In the Battle of Narak, she led the listener army, who had taken Stormform, to battle, with the intent to destroy the Alethi forces.[12] After Adolin pushed her into a chasm,[8] she rammed her Shardblade into the ground, in an attempt to not be swept away by the floodwaters. Despite her efforts, Eshonai drowned.[1]

After her death, the Rider of Storms briefly stopped her soul from entering the Beyond in order to let her ride his winds across all of Roshar as the highstorm swept over the continent.[2]

Eshonai thought little of Jaxlim, her mother, due to her memory loss, though Eshonai still respects her.[3] Their bond is evidently not very strong, considering that when her mother refused to change to stormform, Eshonai still rounded her up with the other dissenters.[7]

Eshonai has a difficult relationship with her younger sister and her views. [13]

This article is still missing information. Please help The Coppermind by expanding it.
Retrieved from "https://coppermind.net/wiki/Eshonai?&oldid=163732"
Categories: