Welcome to the Coppermind, the comprehensive wiki about Brandon Sanderson, his novels, and the cosmere, by the official Brandon Sanderson fansite, 17th Shard. Want to know more about the Stormlight Archive, Mistborn, Elantris, Warbreaker, the Skyward series, and everything else Brandon? You've come to the right place! We have 3659 articles and we're expanding frequently!

Discovering us for the first time? Did you know that almost all of Brandon's adult fantasy works are all set in the same universe? It's true! They are all in a universe called the cosmere, sharing the same mythology, rules to the magic, and more. As such, there will likely be spoilers for other series in the articles you read, since a lot of it is connected! If you'd like to learn about the cosmere, check out:

Looking for something in a specific book or series? Check out:

Want to help with the wiki? Scroll on down to the help section for some guides and some places to start. Also check out the Editor's Corner.

Visit our about page to learn more about who we are. You can talk to us directly on the Coppermind forums or on Discord. For news related to the Coppermind see the official blog. Very old news can be found here. 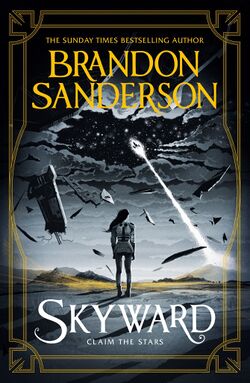 by Sam Green
Cover of the British edition of Skyward

The Cytoverse is the setting of Defending Elysium and the Skyward series. It is our own world, albeit in the far future; as such, it is not part of the cosmere. Alongside Earth and humanity, it contains numerous spacefaring species, all of which share a magic system known as cytonics, which is what the universe is named after.

The Cytoverse is a setting possessing highly advanced technology, from laser weapons and anti-gravity to lifelike holograms and atmospheric envelopes capable of keeping entire space stations breathing. Vast empires, encompassing various species, spread across the stars, connected by faster-than-light ships. Ranging from grand merchantmen to small starfighters, those vessels are propelled by biological FTL system, based on two fundamental aspects of the universe: the nowhere and cytonics.

The universe is comprised of two connected realities -- our own and nowhere, an interdimensional "world" with strange relation to time and space. Little is known of nowhere's appearance, though it is home to a type of beings called delvers, as well as a mineral called the acclivity stone. Regular rules of physics do not apply there completely, and everything to come from nowhere possesses extraordinary properties. The best-known among them is acclivity stone, which is used to counteract gravity and thus provide lift to all spaceships and space stations.

The easiest way for most people to enter nowhere is through a nowhere portal, a stable wormhole leading to it and back. Such portals can be found on many worlds, and though the markings on them indicate that they were made rather than arising naturally, it's unknown who created them. The portals let both people and equipment to be taken through, which allows for mining acclivity stone.

Cytonics are not without their dangers. Chief among those are delvers, the inhabitants of nowhere. Delvers despise both radio signals and, more importantly, cytonics. When sufficiently agitated, they can transport themselves into the physical world. A single delver can be as large as a moon, and possesses a number of deadly powers, including the ability to create and launch meteors, and the capacity to destroy any living being they pass through. This makes them extremely dangerous, and has led to extreme limits being put on the use of cytonics.

Not to fear! We have some guides to help you through the editing process. Our New Editor's Guide has information on editing for people of any experience level. We also have more in-depth pages explaining style, article structure, discussion, and speculation.

Happy editing! Feel free to talk on our Coppermind forums or our Discord if you have additional questions.