For the glyph named after Kalak, see Glyphs/Index#Kalak.

Kalak, also known as Kelek in Vorinism, is one of the ten Heralds of the Almighty on Roshar.[2] He is the patron of the Order of Willshapers. His current status is unknown.

Vorin artwork seems to present Kalak as a young man.[3] He initially volunteered to become a Herald, but, by the Last Desolation, he is terrified of dying and returning to Braize to be tortured. He has vivid, painful memories of the torture that sometime cause him to briefly lose his grip on reality. He knows that he's losing his mind and growing weak, and when given the choice to abandon the Oathpact, he's aware and terrified of the consequences. However, by this point his fear of torture far outweighs his sense of duty.[4]

Kalak is a Cognitive Shadow which can persist after death and take on a human body, though how this body comes about is unknown.[5] While on Roshar, he doesn't age, and can only die by violent means;[6] and after death, he travels to Braize, where he is caught by the Fused and tortured until he or another Herald breaks. When this happens, they are all returned to Roshar and a new Desolation begins.[7]

Prior to the Last Desolation, Kalak wielded an Honorblade, making him a Surgebinder. The Blade granted him control over the Surges of Transportation, allowing him to travel to and from Shadesmar, and Cohesion, whose exact function so far is unclear. Additionally, Kalak could use Stormlight to heal himself.

He seems to have some knowledge of metalworking and smithing, as at the start of each Desolation, it was his duty to re-teach humanity how to cast bronze for weapons.[8] 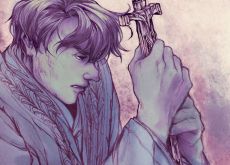 Kalak was born on Ashyn, and made the journey to Roshar when his home planet was destroyed by the overuse of Surges.[9][10] When a war between humans and the native singers started and the Fused began to appear, he, along with nine others, was made Herald by Honor.[11] During the Desolations, his particular speciality was teaching people craftsmanship, mainly smithing bronze.[8]

At Aharietiam, Kalak was late to the appointed meeting place for all the surviving Heralds. There, he found only Jezrien, awaiting him, uncertain whether or not Kalak had perished. When Kalak confessed to his fear of returning to Braize, as was the Heralds' duty in-between the Desolations, Jezrien told him about Ishar's plan to abandon Taln to the Oathpact. Though initially apprehensive, Kalak agreed readily enough, out of fear of the tortures. He and Jezrien left their Honorblades along with the others, and departed in opposite directions.[2]

Kalak's current fate is uncertain, though he has definitely survived to the present times. It's likely he's accompanied Nale to visit Gavilar Kholin on the night of the latter's assassination.[12]

“They see us as divinities. They rely upon us, Jezrien. We're all that they have. ”

In the Era of Solitude, Kalak is basically unknown by his true name. In Iri and Rira, he's called Kellai, while in Vorinism, he is known as Kelek.[13][14] The latter came about due to a vowel shift in the Vorin language family.[15]

Vorin tradition associates him with the number 8 (kak), the Essence of Foil, and the Attributes of Resolute and Builder.[16] In the countries following the religion, he's one of the most revered and commonly-prayed-to Heralds alongside Jezrien, with his name being an extremely common expletive.[17] Other than by itself, it can also be found in phrases such as:

Even further east, in New Natanan, Kalak is often equated with the Stormfather.[1] The name Kaladin is derived from Kalak.[26]

This article is still missing information. Please help The Coppermind by expanding it.
Retrieved from "https://coppermind.net/wiki/Kalak?&oldid=129148"
Categories: