“We chose this burden willingly. Well, we can choose to drop it if we wish. ”

Jezrien, also known as Jezerezeh'Elin, Yaezir and Yaysi, was one of the ten Heralds of The Almighty[4] and the patron of the Order of Windrunners.[5] Jezrien fought in multiple Desolations, defending mankind from the Voidbringers and returning to Damnation between Desolations to be tortured.[6] After centuries of combat, Jezrien abandoned the Oathpact with eight of the other Heralds, pretending the Voidbringers had been defeated once and for all.[4] He went into hiding, gradually losing his mind,[7] while the rest of the world revered his memory and he became a figure of legend over the following millennia.[2] 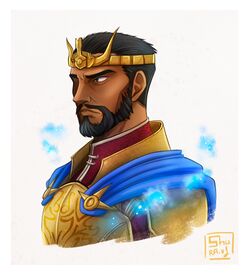 Jezrien has dark eyes[8] and black hair.[4] He is tall and appears almost Alethi, although his skin is a little darker than a typical Alethi man and his features are slightly off.[8] As a Herald, Jezrien appears to be about thirty years old and wore a short, neatly-trimmed black beard.[4] He stands confidently[8] with a royal bearing.[4] He often wears fine white and blue clothing,[8] although it is oftentimes stained and charred by battle.[4] He speaks with a deep, calm voice that has a regal sound to it.[4]

After he abandoned the Oathpact and started living as a beggar, Jezrien's beard grew long and scraggly,[9] streaked with black and gray.[10] His hair became matted and filthy and he smelled like garbage.[9] Jezrien's clothes are reduced to ragged scraps. His words are often slurred or believed to be gibberish.[9][10]

“Better that one man should suffer than ten. ”

Jezrien is widely believed to have been one of the best men to have ever lived. Upon joining the Oathpact, he was an honorable and true man.[4] Jezrien's specialty was leadership; he was a great instructor on the guidance of men.[11] He is a man willing to admit his mistakes and make common cause with those that had been his enemies.[12] After centuries of torture, Jezrien became damaged by anguish and grief.[4] He was afraid to return to Braize and face the torments of the Voidbringers again. This led Jezrien to make the choice to abandon the Oathpact and leave Taln alone on Braize. He had even reached such a point that he was willing to lie to the surviving humans that he and the other Heralds had achieved final victory. He seemed distraught by his own cowardice at the ending of the Oathpact and ashamed of leaving Taln to suffer.[4]

In the millennia that followed, he succumbed to insanity.[7] By the Era of Solitude, Jezrien's once sharp mind had been dulled thoroughly.[9][10] He spoke nonsensically and without any clear meaning behind his words.[9] He seemed to have some semblance of lucidity, referencing the various Unmade, but it is uncertain how much awareness he had. He appeared to speak gibberish at times, but it is possible that he is speaking in an ancient language, such as the Dawnchant. 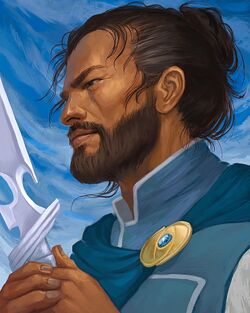 “The Heralds glow like the sun, wield the Honorblades, and speak with the voices of a thousand trumpets. They could cast down buildings with a command, force the storms to obey, and heal with a touch. ”

—Shallan Davar's thoughts on the Heralds[13]

As Jezrien served as the the Herald of Kings, it is likely Jezrien was one of the best leaders and instructors of leadership that has ever lived; he trained mankind's leaders upon his return before each Desolation.[11] As one of the Heralds of the Almighty, it is nearly impossible to truly kill Jezrien. In truth, the Jezrien that exists now is a Cognitive Shadow.[14] Before breaking the Oathpact, upon his death he was returned to Damnation to be tortured,[4] with his immortal body being constantly restored.[15] Judging by the abilities of the other Heralds, he possesses superhuman reflexes[16] and strength.[17] Even after abandoning the Oathpact, Jezrien remains ageless, and appears as youthful as the day he became a Herald.[4] His immortality is not impregnable, however. Jezrien was sealed away by Vyre's knife into a gemstone.[2] According to Kalak, once Jezrien was sealed, his Connection to the other Heralds was severed;[18] as a result, his soul decomposed into an ordinary soul with no valid Connection to the Spiritual or Physical Realms.[19] Over the weeks he faded into the Beyond, at last truly dying.[3]

As a Herald, Jezrien possessed an Honorblade, a variety of Shardblade given to him by the Shard Honor.[20] This Shardblade is able to cut through any material, stone, steel, or even living things effortlessly.[10] This allowed Jezrien to be a formidable foe on the battlefield, particularly against thunderclasts, as his Blade can cut their stone bodies with ease.[21] As he had spent an enormous amount of time using the Honorblade in the fight against the Voidbringers, Jezrien is very experienced in using his Blade and his skill at dueling can only be matched by the other Heralds.[22] Unlike most Shardblades, this Honorblade also granted Jezrien access to the Surges of Adhesion and Gravitation.[20] As he was not sworn to a spren, he was able to do with his Blade what he liked, without regard for any oaths.[23] However, the fact that his powers were not granted by a Nahel bond prevented him from having squires.[24] Jezrien also had no need for Stormlight, as his Surgebinding was powered directly by Honor.[25] It is unknown how this would have been impacted by Honor's death. Since giving up his Honorblade when he gave up the Oathpact, Jezrien is unable to Surgebind. 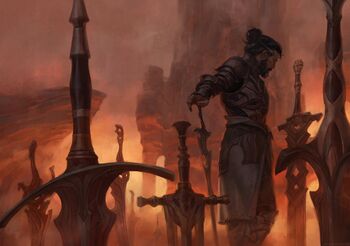 Jezrien was likely born on Ashyn.[26] At some point in the past Jezrien ruled as a king.[4] It is unknown if Jezrien was ever married but had at least one child, Shalash.[1] He and Nale spent some time on opposite side of a conflict, but Jezrien ultimately came to the conclusion that he had been in the wrong. After mankind began to lose its fight against Odium's immortal Fused, Jezrien and Ishar formed a plan to counter this threat.[12] Jezrien invited Nale to join them, believing that Nale's honor was above reproach. Jezrien and nine companions asked Honor for the ability to seal the Voidbringers on Braize.[6] Honor agreed, the Oathpact was founded, and Jezrien and his nine companions became Heralds of the Almighty and were given their Honorblades. Jezrien was tortured with the rest of the Heralds between every Desolation until one of them broke. When that happened, Jezrien and the other Heralds returned to Roshar to guide mankind in the fight against the Voidbringers. Jezrien would aid their leaders in learning how to effectively guide their peoples.[11] When the spren began to bond with humans to grant them Surgebinding, Jezrien became the patron of the Windrunners, the order of the Knights Radiant that bore the same powers as Jezrien.[5] 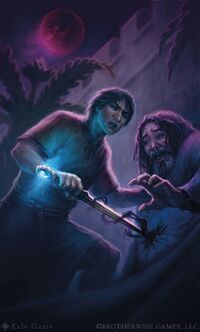 “I will lead the charge for the Tranquiline Halls. You will not see me again, but think not on that now! You have won your peace. Revel in it! Rebuild. Go now, help your fellows. Carry with you the light of your Herald king’s words. We are victorious, at long last, over evil! ”

Many Desolations after the beginning of the Oathpact, Jezrien and the other Heralds save for Talenel, who had died, decided that they could no longer withstand the torture they faced in between Desolations.[4] They agreed to abandon their oaths, leaving Taln alone in Damnation. Jezrien was chosen by the rest to wait and see if Kalak had survived and to pass on word to him of their decision. After explaining their decision to Kalak, Jezrien summoned his Honorblade and left it stuck point-first into the ground, before heading off by himself.

“Praise Yaezir, Herald of Kings. May he lead in wisdom. If he ever stops drooling. ”

Following the abandonment of his Blade, Jezrien spread the word of their victory to the survivors of the Last Desolation.[6] While Jezrien was never killed and returned to Damnation after Aharietiam, avoiding death for four and a half millennia,[6] he seems to have succumbed to the same madness plaguing the other Heralds.[7] Jezrien became a drunk beggar who lived in a Beggars' Porch in the Kholinar palace.[9] He was known as Ahu by then, and was occasionally the drinking companion of Highprince Dalinar Kholin when Dalinar was trying to drink clandestinely or could not find more alcohol. Jezrien attended the Beggar's Feast on the night that King Gavilar Kholin was assassinated, speaking incoherently to Szeth before collapsing.[10] Six years later, after the capture of Kholinar by the Voidbringers, Jezrien was stabbed by Moash[2] with a raysium knife.[28] Jezrien was initially unfazed by the wound, but quickly realized that he had been mortally wounded, screaming and dying quite suddenly,[2] his soul transferred into the gem.[28][29] At the moment of Jezrien's sealing, his Connection with the other Heralds was broken[18] and caused them to feel a painful tearing sensation and they all knew that he was dead.[2] While the Fused were initially successful in trapping Jezrien's soul, their plan ultimately failed. With the Oathpact severed and Honor Splintered, Jezrien's soul could not exist long without his body.[3] Within weeks his mind had faded and he was truly gone, destroying the Oathpact in the process.[30] 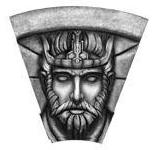 “You call him the Stormfather, here in Alethkar, or Jezerezeh'Elin. He was king of the Heralds. Master of the storms, bringer of water and life, known for his fury and his temper, but also for his mercy. ”

Over the millennia that have passed since Aharietiam Jezrien has become mythologized across Roshar. He is known as one of the greatest humans to have ever lived.[2] In the Vorin kingdoms of the east, Jezrien has been conflated with the concept of the Stormfather, so many believe them to be one and the same. He has come to be known as Jezerezeh'Elin, the Herald of Kings, and men swear by his name[32][33] and burn glyphwards in prayer to him.[34] He is associated with the number Jes, the essence Zephyr, the gemstone sapphire, and the divine attributes Protecting and Leading.[35] He is commonly depicted in art and sculpture with the other nine Heralds.[10] In some cases, when a serious crime is committed, men may be strung out during a highstorm to be judged by Jezrien. If they survive, they were innocent, although men typically do not survive the highstorm.[36] Vorin people who have interacted more directly with the Stormfather have come to realize that the two are not one and the same.[37]

“[The Emuli] worship Jezrien, though they don’t accept him as a figure from the Vorin religion. They name him the only god. ”

In Emul, Jezrien is worshipped as their only god, possibly under the name Prime Kadasix.[31][38] They hold that he named their kingdom as well as its capital, Sesemalex Dar.[31]

In Azir and the other Makabaki kingdoms, Jezrien is known as Yaezir, Kadasix of Kings.[39] They believe that each new Prime Aqasix is chosen by the will of Yaezir, and that he will guide them in their search for the person he has already ordained to be the Prime.[39]