“ They are the spren of Parshmen long dead. They are their kings, their lighteyes, their valiant soldiers from long, long ago. The process is not easy on them. Some of these spren are mere forces now, animalistic, fragments of minds given power by Odium. Others are more … awake. Each rebirth further injures their minds.

They are reborn using the bodies of Parshmen to become the Fused. ”

The Fused are the souls of ancient singers that are able to be reborn by possessing the bodies of living singers. They are considered to be higher in singer society than Regals and common singers.[2] They have powers similar to Surgebinding; however, unlike the Knights Radiant, there are only nine "brands" of them, rather than ten, and each brand has access to a single Surge, with none accessing Adhesion.[3][4]

These ancient singer shadows exist in a state very similar to spren, until they take over a singer body. This process requires a living singer to open themselves up to bonding a new spren during one of Roshar's invested storms, in the same way as they would to adopt a new form. The singer shadows waiting to become a Fused then choose one of these willing, open singers; in a process that causes intense pain to the host, it then takes over the host's body.[2] Fused are able to exert some amount of will upon their forms, such as skin patterns persisting or growing carapace in individual patterns.[5]

The Fused can be killed by conventional means, but they can use Voidlight to heal.[6] However, damaging their gemheart is instantly fatal.[7] The Fused can be permanently killed by being stabbed with a raysium dagger connected to a gem of anti-Voidlight, provided there is enough anti-Voidlight in the gemstone.[8] If they are wounded by an insufficient amount of anti-Voidlight to destroy them completely, they may still be wounded sufficiently that they will be reborn mad.[9] They can also be permanently killed by Nightblood.[10] They can also be trapped in gemstones.[11] Fused are generally trapped in the Rosharan system.[12]

In the past, Fused couldn't be reborn when the Heralds stayed on Braize to uphold the Oathpact. They could be reborn many times during each Desolation and were again sealed away when the Heralds returned to Braize.[11] To avoid this process of rebirth, humans fighting in past Desolations once tried to imprison the Fused rather than kill them; this did not work, as the Fused are able to will their spirits out of their bodies and seek a new host.[11] In the True Desolation, the Fused use the Everstorm to great advantage. Not only can they use the Everstorm (instead of relying on highstorms) to possess new living singers, but when they do die, they can immediately Return during the next Everstorm if they can find a living singer willing to take on the burden.[3]

Due to their Invested nature, the ancient ones that become the Fused do not need to bond a spren to attain and maintain full sapience.[13] However, during the seven thousand years of war, many Fused have lost some or all of their sanity, much like the Heralds. They are unable to die, and even the insane Fused continue to be reborn.[8] The rebirth process injures the minds of the Fused.[1] Many Fused who remain sane enough to function also behave erratically in some regards. Examples of this include The Pursuer, who is immensely obsessed with vengeance and Raboniel, who wishes to end the war regardless of the victor. Each brand of Fused has their own particularities.[14]

The Fused have an extremely complex political and social hierarchy even though their actions are generally governed by Odium. Generally, they have hatred and contempt for humans and place common singers above them in status. Among common singers, those chosen to be elevated are granted forms of power and become Regals. The Fused tend to defer to thunderclasts and Unmade. However, even within the singers there are delineations of status and authority. There are nine brands of Fused with different powers and specialties.[15] Other factors such as reputation, history, and capacity also matter a great deal, and how well individual Fused have retained their sanity.[11] Many of the important Fused have a Voice, an envoyform singer who represents their Fused and helps manage their affairs;[5][16] Voices are generally accorded respect beyond that given to ordinary Regals,[17] especially if the Fused they serve is particularly important.[18][19][20]

No singer has been elevated to a Fused since their initial creation.[21]

"Nine" redirects here. For the group known as Tashi and the Nine, see Tashikk#Religion.

The highest authority among the Fused is the Nine, a council formed by nine Fused. The Nine entomb themselves in stone pillars in an atrium through Soulcasting, and most will leave their head and one arm free. The stone pillars have an organic feeling, like tree growing on them, and makes people feel like they are older than stones itself. They will hold meetings in the atrium with high ranked Fused, who would each bring their Voice, to announce them before they speak. They would hear field reports and proposals from the Fused. They can accept opinions from other Fused but have the final say for anything. Raboniel was once among the Nine and this position is subject to change. The Nine do not eat, living only on Voidlight.[11] 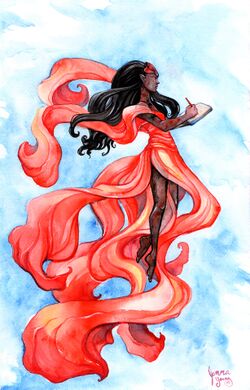 by Jemma M. Young
A Fused with the power of Gravitation

“Is it better to have more abilities, or to have one ability handled expertly? We of the Fused know our Surge with an intimacy a Radiant will never know. ”

The Fused use powers in ways similar to the Knights Radiant, but with a few notable differences. Like all Surgebinders, the Fused gain their abilities through manipulation of Roshar's fundamental forces, the Surges, although unlike them, each one of the nine brands of Fused can only access a single Surge. A specific Fused cannot change forms (and thus, powers).

Another difference between the Fused and other Surgebinders lies in the fuel of their abilities. Surgebinders use Stormlight, but the Fused rely on Voidlight - Investiture that does not appear to require a physical conduit, like gemstones, but instead can be directly supplied to the user from Odium. Voidlight provides the same healing abilities as Stormlight. However, it is inefficient in that regard and, given the limited amount, the Fused are careful to avoid injury.[22][23][24] Fused can use their Voidlight for passive and active effects; for example, Heavenly Ones can fly without expending Voidlight, and Lash other people and things by expending Voidlight.[25]

For images of the Fused, see /Gallery.

The shanay-im, or Heavenly Ones, are Fused who can manipulate the Surge of Gravitation. Fused of this brand can manipulate their own gravity without expending Voidlight, but must use it to heal themselves or to Lash things other than themselves.[26] These abilities are similar to the Basic Lashing used by the Windrunners and Skybreaker.[26] Shanay-im are often seen manipulating the gravitation vector of both themselves and other bodies and objects, resulting in abilities such as flight, reduced weight, and sending their enemies flying off into the air. The Fused accelerate more slowly than Surgebinders when using Gravitation.[27] This is due to them expending less energy and does not have to do with the gravity of Braize.[28] Over a large span, Fused will go faster than Surgebinders.[29] Fused can only Lash themselves once.[29] These Fused are able to enter space, but cannot travel far, since they would require a large amount of Voidlight to heal due to the lack of air and pressure.[12]

They usually wear extremely long robes, trailing behind them several feet. They utilize long lances suited for aerial combat, with aluminum coating to block Shardblades and a fabrial to drain Stormlight from the Radiant it pierces.

When fighting Windrunners, they hold an honorable tradition of one-to-one dueling. They raise their weapons to those they wish to duel, and engage upon consent from the Windrunners. The rest of their members float about and do not interfere with the duel. The Windrunners play along with the tradition, as the Windrunners have a smaller number and this prevents them from being ganged up on.[6] This tradition does not extend to normal soldiers.

The shetel-im, or Flowing Ones, are Fused who control the Surge of Abrasion. This gives them the ability to change the force of friction between objects and bodies, similar to Edgedancers.[4][4] One of the shetel-im participated in the effort to steal the King's Drop at the Battle of Thaylen Field.[30]

The Magnified Ones are Fused who interact with the Surge of Progression. They can grow their carapace extremely rapidly and in specific shapes, allowing them to create tools and weapons out of their carapace. This also allows for the creation of extra carapace armor around specific points of their body. They are among the largest and bulkiest of Fused brands.[31]

The mavset-im, or Masked Ones, are Fused who interact with the Surge of Illumination.[5] Their abilities appear to mimic the Lightweavers ability to change their own appearance by creating illusions. One of the mavset-im participated in the effort to steal the King's Drop at the Battle of Thaylen Field.[23]

Even other Fused are weary of the mavset-im.[5]

The fannahn-im, or Those Ones of Alteration, are Fused who interact with the Surge of Transformation.[11] This grants them abilities similar to Soulcasting, and they are capable of transformations such as turning a sword to dust or breathing out a toxic compound.[32] This even includes corrupting or unmaking spren.[33][12] The Altered Ones are considered to be great builders among the Fused, responsible for the remodeling of the palace in Kholinar following its capture by the singers.[11] These singers are tall even among the Fused, reaching heights of seven feet, with hairstrands present only on the very tops of their heads where carapace is not present. 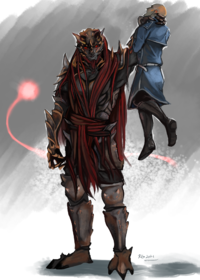 The nex-im, or Husked Ones, are Fused who control the Surge of Transportation.[11] This Surge allows them to evacuate their body as a ribbon of red light similar to a spren, leaving behind a hollow husk of carapace to crumple to dust, and recreate their body at the destination point. This ribbon cannot squeeze though small gaps.[34] They only hold enough Voidlight to make four jumps. Thus in battle, they usually use the first three jumps for attacking and the fourth to escape and replenish Voidlight.[34] Forming a fourth husk will leave them trapped, unable to become a ribbon of light. Two ways of killing a Husked One include killing them before they evacuate the body, or forcing them to form a fourth body and kill them.[20][35] They also cannot take anything with them that is not part of their body. Because of this, at least one of the Fused of this brand, Lezian the Pursuer, has extremely long hair to cover his body like clothing and uses his carapace spurs as weapons.[26] Very few of these Fused exist.[11]

The makay-im, or Deepest Ones, are Fused who control the Surge of Cohesion.[4] They can use this Surge to meld with solid objects (though they mostly stick to stone) and pass through it, though they cannot take anything that is not part of their body with them and cannot see when they do so.[32][18][14] They have some of the most minimal carapace covering of any singer form, only a simple cup around the genitals, although some have carapace talons.[32] They also have milky white eyes glowing red from behind.

This article is still missing information. Please help The Coppermind by expanding it.
Retrieved from "https://coppermind.net/wiki/Fused?&oldid=160415"
Categories: