Raysium is the God Metal associated with the Shard of Odium. Its name is presumably derived from Rayse, the original Vessel of Odium. It is rare and available only to a select few amongst Odium's forces.[1] 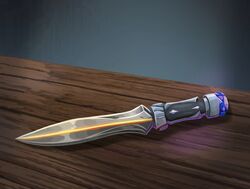 by Connor Chamberlain
A raysium dagger

Raysium is a bright golden metal, so light it is almost white.[2]

Raysium naturally conducts Investiture, drawing it in from any source. This applies to all of the Lights, but also to spren - allowing someone to transfer spren between gemstones, including spren halves produced during the creation of pairing fabrial.[3] When using the soul-harvesting dagger, Raboniel removes the raysium strip and reinserts it in the opposite orientation in order to switch the knife from drawing Investiture into its gemstone to sending it back out, suggesting that the raysium only conducts Investiture in one direction. It is unclear if all raysium is polarized in this fashion or if the portion in the soul-harvesting dagger was specially treated.

As raysium's physical properties are unknown, most of its uses have to do with its ability to conduct Investiture. 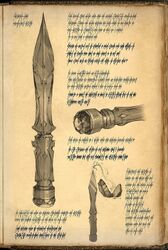 Odium's forces have been using raysium in weapons for several Returns leading up to the True Desolation, utilizing the metal's Investiture conductivity to drain enemy Radiants of their Stormlight, and also fill gems with Light.[3] The spears used by the shanay-im during the True Desolation are likely such weapons.[4]

Soon after the imprisonment of Ba-Ado-Mishram during the False Desolation, a Fused known as She Who Dreams realizes that raysium could also be used to direct the soul of a Herald to a gemstone prison.[3] At least a few such soul-harvesting daggers have been created in the years since - the knife used by Vyre to kill Jezrien is one of them, and Raboniel is in possession of at least three more during the occupation of Urithiru: one gets destroyed while experimenting, one she uses to permanently kill her daughter (and is later used by Navani to mortally wound the Lady of Wishes herself[5]), while the other is charged with anti-Stormlight and given to Vyre to eventually be used against Phendorana.[6] Yet another such knife is given by Mraize to Shallan so she can collect the soul of the Herald Kalak for the Ghostbloods.[7]

The soul-harvesting daggers contain a gemstone set in the pommel, and when used to kill a Herald will trap the soul inside. This prevents the soul from returning to Braize, stopping the cycle of death and rebirth.[2] The gemstone used possibly corresponds to the targeted Herald, with a sapphire specifically being used to kill Jezrien.[8] When Vyre uses a dagger to kill Jezrien, Shalash distinguishes this death apart from others, as she is unable to sense his soul.[2] This process has similar principles to Hemalurgy, though this would cause debate between cosmere philosophers on whether the daggers' properties are in fact Hemalurgy or a distinct, albeit related, process.[9] When charged with anti-Stormlight, the daggers are able to kill Radiant spren, which breaks the bond between the spren and its Radiant.[10] The behavior of the daggers when charged with other forms of light is unknown, as is how the gemstone of the dagger affects its behavior with spren.

Raysium has no known uses in cage construction, but its ability to transfer Investiture - spren, specifically - from one gem to another allows for a half-spren trapped in one half of a conjoined pair of gems to be transferred to another gem, not part of the original pairing. This can lead to an asymmetry between the movements of the two spren halves, as moving a larger gem a certain distance will now make its smaller paired counterpart move a larger distance.[3]

This article is still missing information. Please help The Coppermind by expanding it.
Retrieved from "https://coppermind.net/wiki/Raysium?&oldid=167186"
Categories: