“Of the Unmade, Sja-anat was most feared by the Radiants. They spoke extensively of her ability to corrupt spren, though only "lesser" spren—whatever that means. ”

“Lore suggested leaving a city if the spren there start acting strangely. Curiously, Sja-anat was often regarded as an individual, when others—like Moelach or Ashertmarn—were seen as forces. ”

Sja-anat takes the form of a woman with waist-length black hair, wearing a sleeveless, flowing tunic with a simple belt at the waist.[5] She can also appear as the shadow of a woman with long, flowing hair and white holes for eyes[7]. Other times, she looks human but with the white holes for eyes of the shadow.[8] So far, she has only been shown to be visible in mirrors, and only to the person she wishes to appear to.[8] When human-like, the rest of the reflection is otherwise as normal, but when she fades into her shadowy variant, the rest of the reflection fades away as well.[9][5]

It is noted that Sja-anat wants to be a god in her own right.[10] She is very deceptive, able to successfully trick Odium and aid the Radiants behind Odium's back,[11] as well as deceive him on her personal objectives, such as successfully sending an Enlightened true spren to Mraize by hiding them in a group of Enlightened windspren.[10] She is also independent and earnest; she does not want to be Odium's servant anymore and desperately wants Shallan to believe that she has defected from Odium.[5] Sja-anat also cares for her children, the spren that she has corrupted, and wants to find them a home, one that she would be able to share.[8][10] 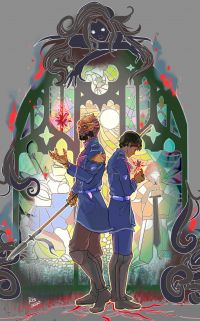 “Keep your eyes open. Once Sja-anat touches a spren, it acts strange. Call attention to anything you see. ”

Sja-anat's touch has the ability to corrupt spren that she comes into contact with.[2] Sja-anat refers to this process as Enlightening.[11] Spren affected by Sja-anat begin to carry the taint of Odium,[13] and in rare cases can even grant abilities associated with Odium's power,[14] though the extent of his influence on the affected spren is unknown. Corrupted spren take on noticeably different appearances, typically changed in coloration and shape but still strongly connected to their original form.[3] Other times the resemblance of an Enlightened spren to its previous appearance is much more tenuous, notably in the case of an Enlightened mistspren which is changed from appearing as a sparkle of reflected light[15] to a more crystalline form that is structured like a shimmering red snowflake.[16]

The lesser spren that Sja-anat corrupts are capable of serving as her spies[12] or delivering messages for her.[11] Messages sent from Sja-anat are spoken by the corrupted spren in Sja-anat's voice into the mind of the person to which they are sent. Sja-anat refers to the corrupted spren as her children.[8] In the past Sja-anat often corrupted lesser spren,[2][12] but she has now displayed the ability to corrupt true spren,[17] such as spren capable of forming a Nahel bond like Glys, and the spren of the Oathgate.[11] However, she does not usually Enlighten true spren without their consent.[18] Enlightening has "dire ramifications" for existing Nahel Bonds, so Sja-Anat usually Enlightens unbonded spren.[19] Corrupted spren do not appear to be particularly dangerous, so it is unknown what impact Odium's influence has on the spren aside from their appearance. They work similarly to uncorrupted spren in fabrials, although they were unaffected by the Sibling's suppressor when its effect was inverted.[20] 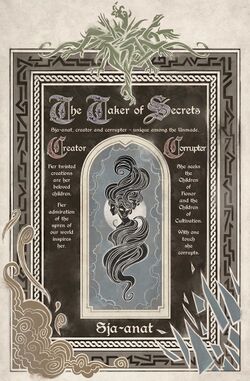 Sja-anat's origin is unknown; thus it is uncertain when she came into being. She was involved in the past Desolations,[2] with her corrupted spren serving as spies on mankind.[12] In the past when her corrupted spren were seen in a village, the people often fled their homes.[2] Sja-anat herself was the Unmade most feared by the Radiants.[1] After Aharietiam, Sja-anat seems to have remained on Roshar, although none of her corrupted spren are known to have been sighted since the Final Desolation. At some point Sja-anat corrupted the true spren Glys.[17]

Following the arrival of the Everstorm and the beginning of the True Desolation, Sja-anat became active again. She began corrupting spren in and around the area of Kholinar.[2] During the Siege of Kholinar, as a part of a trap for Adolin Kholin, Shallan Davar, Kaladin, and their spren, Sja-anat was forced to touch the spren of the Kholinar Oathgate to corrupt it.[5] When Shallan infiltrated the palace in the guise of a messenger, Sja-anat saw her.[9] Sja-anat attempted to reach out to Shallan and tell her that she was not her enemy while she danced with the Cult of Moments[21] and when she infiltrated the revel on the Oathgate.[22]

“Listen, Radiant. Listen to my plea. Ashertmarn fled on purpose. It is a trap. I was compelled to touch the spren of this device, so it will not function as you wish.”

During the assault on the Kholinar Palace, Sja-anat spoke to Shallan and revealed to her that the Oathgate had been corrupted and that she was supposed to kill them if they activate the Oathgate.[5] When Shallan and her companions decided to activate the Oathgate anyway, Sja-anat promised that she would try not to kill them,[8] and when the gate was activated they were merely transported to Shadesmar.[23] After Shallan and her group were transported in Shadesmar, Sja-anat lied to Odium and told him that corrupting the Oathgate had had an odd effect and that the Radiants had been sent far from the point of transfer.[11] Despite this lie, Sja-anat believed that Odium still did not trust her. Shortly afterward, Sja-anat sent a corrupted gloryspren to deliver a message to Shallan. It explained the lie that Sja-anat had told Odium, as well as the fact that Odium's servants were pursuing them in Shadesmar. It also revealed that Shallan's deception had worked, and Odium believed her to be an Elsecaller rather than a Lightweaver. At some point the Ghostbloods became aware of Sja-anat's disloyalty to Odium and sent Shallan orders to either recruit her to their organization or capture her.[24]

This article is still missing information. Please help The Coppermind by expanding it.
This article was complete and reviewed prior to Rhythm of War, but now needs to be updated.
Retrieved from "https://coppermind.net/wiki/Sja-anat?&oldid=161213"
Categories: