“ Ashertmarn, the Heart of the Revel, is the final of the three great Mindless Unmade. His gift to men is not prophecy or battle focus, but a lust for indulgence. ”

Ashertmarn, the Heart of the Revel, is a mindless Unmade.[1] He takes the form of a giant, black, inhuman heart that beats to an irregular rhythm. Thick black veins spout from the heart, melding with the ground nearby. He leads people to indulge in excess. He speaks to the people in his area, urging them to abandon their lives and responsibilities. The closer one is to him, the harder it is to resist Ashertmarn's tempting plea.[2] 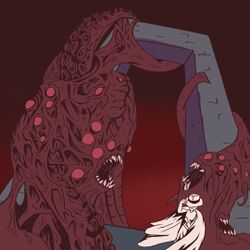 by EccoS
Facing off with Veil in Kholinar
For more images, see /Gallery.

During the mission to aid Kholinar, Shallan discovers the presence of two Unmade, including Ashertmarn.[3] In order to investigate the revel, Shallan creates a reputation by delivering food to the poor. Once she has been heard of, she takes a large offering of food to the revel and is accepted onto the Oathgate, Ashertmarn's __cpLocation.[2] The Oathgate is divided into three sections. In the outer section, the people delighted in an abundance of delicious foods, mindlessly sating their hunger for the revel. In the next ring inward, the occupants crawled from place to place, too focused on the excess to even stand. The food there is rotten and moldy, infested with decayspren. In the center ring is the Unmade himself, completely covering the Oathgate's control building. Shallan would have been unable to extract herself from the revel if not for Sja-anat's interruption, who appeared to Shallan, breaking her focus on the black heart.[2]

Later, when Shallan had to clear the Oathgate platform as an escape route for the people of Kholinar, she tried to banish it the same way she did with Re-Shephir. After trying to convince Shallan to indulge mindlessly, Ashertmarn retreated for reasons unknown.[4] He likely did so so that the Oathgate, whose spren had been corrupted by Sja-anat, could kill Shallan, Kaladin, Adolin, and Azure.

This article is still missing information. Please help The Coppermind by expanding it.
Retrieved from "https://coppermind.net/wiki/Ashertmarn?&oldid=172873"
Categories: