A fabrial is a Stormlight-powered mechanical device from Roshar that uses spren captured in gemstones to perform a particular supernatural task. The magical properties of modern fabrials can usually be activated by anyone who knows how to use them.[1] A person who creates or designs fabrials is called an artifabrian.[2] The term "fabrial" is often used colloquially to refer to the entire device. Artifabrians, however, call that a "machine", and use the word fabrial to refer specifically to a gem with a captured spren.[3]

During the Heraldic Epochs, the Knights Radiant knew how to create Surge fabrials, including Soulcasters, healing fabrials, and Oathgates. Their knowledge of non-Surge fabrials, which the modern fabrial science concerns itself with, was far less advanced than that of the current scholars.[4] Some principles, however, were known even then: among others, the lifts in Urithiru were created with conjoining fabrials.[5] With the fall of the Radiants, knowledge of most fabrials was lost, with Soulcasters as the major exception. Over time, the stories of Radiant fabrials became vastly exaggerated, with many people believing that they were far more numerous, and much more advanced, than what modern science has created.[4]

While the fabrials were known for centuries, it was only recently that the pace of fabrial inventions picked up, with creations such as the heating fabrials and spanreeds being only a few decades old at most. Most research occurs in the eastern nations of Alethkar and Jah Keved, with Navani Kholin as a particularly important patron. Half-shards, an important breakthrough in fabrial research that attempts to mimic Shardplate, were only perfected in 1173, at the tail end of the Era of Solitude.[6] 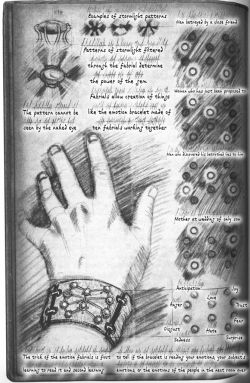 Creating modern fabrials requires trapping the proper type of spren in a gemstone cut for that purpose.[7] To trap the spren, artifabrians lure it into a gemstone with something it loves and knows well. Once it is lured into the gem, the spren cannot easily escape.[8] The types of spren that can be captured in a polestone depend on the gem's type and color, implying that there are thousands of possible combinations.[3] These fabrial-gems are encased in a wire frame, but it is unknown whether this has an effect on the fabrial. Their power can be determined by the pattern of Stormlight that gets filtered through the gemstone, although it cannot be seen with the naked eye.[9] Spren corrupted by Sja-anat will behave differently in a fabrial.[10]

Once trapped in a gem, spren respond to stimuli in consistent and predictable ways. The metal frame surrounding the gem creates the stimuli the spren react to - pressing metal against a flamespren in a ruby increases and decreases heat.[7] Multiple fabrial gems can be placed inside a single wire frame, which lets them work together to create more complex results. The emotion bracelet, for example, has ten gems, with patterns in which they light up corresponding to different emotions.[9]

How the ancient Surge fabrials were created is unclear, but it is likely a different method. Their functioning is also different: for example, Soulcasters require a request for aid, which is unnecessary in modern fabrials.[11] However, they still do involve spren being bound to gemstones in some way - two large spren can be seen guarding and controlling the Oathgates in Shadesmar.[12] So long as the gemstones are preserved and the spren are not compromised, any Surge fabrial can be recreated to operate just as it used to.[13] Any Surge can be replicated by fabrial science.[14] However, in the present day, fabrials that use Surges are extremely rare, and most of them date back to the era of the Knights Radiant.[citation needed]

In contrast to Surgebinding or Old Magic, most fabrials can be operated by anyone, as long as they know how to do so (the only exception being the Oathgates, which require a Radiant to activate, although that might be a security measure rather than a crucial design element).[1] Some, like heatrials, are even capable of functioning without human input.[15] The self-contained nature of fabrials sets them apart from most manifestations of Investiture in the cosmere, wherein the magic is accessed and directed by the user (often with specific requirements or limitations).[16][17][18]

Modern artifabrians divide the fabrials they design into five groups across three categories.[2] Ancient fabrials, including Surge fabrials, do not fit into these categories and are grouped seperately.

Appropriately named, altering fabrials qualitatively alter the property or attribute they target. Well-known examples include altering the temperature of an object or an area and enhancing or dampening the sensation of pain, though artifabrians believe there is potential for even greater types of fabrials in this category.[2]

Augmenters
Altering fabrials that increase or enhance an attribute are known as augmenters. They work best with forces, emotions or sensations.[2] Half-shards and Grandbows are examples of augmenters that increase durability.[2][19] There are also heating fabrials that generate heat, sometimes called warmers or heatrials.[20][21][8] Painrials that enhance the feeling of pain also fall under this category.[22]

Diminishers
Diminishers act as opposites of augmenters, decreasing the magnitude of their targeted trait. In general they operate in a similar manner to augmenters, with similar restrictions.[2] Painrials that decrease pain are a type of diminisher.[23]

Pairing fabrials are, as the name suggests, created in pairs that can move in parallel, or the opposite, over great distances. This category was a recent discovery during the War of Reckoning.[2] Force is conserved between each pair of fabrials, and the force required to move one is equivalent one required for moving both. Despite limitations in how far the fabrials can be separated and still work (dictated by certain processes during manufacture), conjectures about possible applications are being discussed.[2]

Conjoiners
Conjoiners are created from infused rubies which are split in half after the spren is already captured. The two halves are then able to exhibit parallel movements over large distances. Spanreeds are the most widespread example of conjoiner, linking two pens and allowing for long-distance comunication.[24][2]

Reversers
Reversers are created in a similar manner to conjoiners, using an amethyst instead of a ruby. The two halves are then able to exhibit equal, but opposite reactions; lifting one would cause the other to be lowered.[2]

Warning fabrials detect things and give notice to the user. Their range depends on the the amount of Stormlight infused into its fabrial-gem.[2]

Alerters
Alerters use heliodors to detect the presence of objects, feelings, sensations, or phenomena, and warn the user. There are alerters which can detect approaching people while excluding certain persons from detection.[2] The Emotion bracelet is an alerter able to detect different emotions.[9] 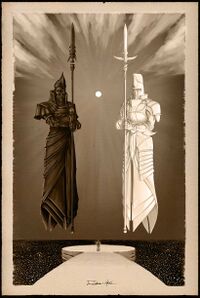 An Oathgate as seen from Shadesmar by Ben McSweeney.

These are fabrials that are able to manipulate Surges, replicating the effects of Surgebinding and Voidbinding.[14][25]

Soulcasters
These fabrials mimic the the Radiant ability of Soulcasting.[26] A Soulcaster fabrial consists of two rings and a bracelet connected by chains which hold a group of three gemstones across the back of the hand. Most are only able to effect small, singular changes, such as turning stone into water, while about one in ten can effect any change.[27] They can be activated by tapping one of the three gemstones when holding the hand against what is to be changed.[28] They manipulate the Surge of Transformation.

Regrowth fabrial
Ancient Radiants possessed fabrials constructed from a large topaz and heliodor that were able to "regrow" and repair injuries through manipulating the Surge of Progression.[29] In the present day, they have been lost; however, the Herald Nale possesses one capable of bringing someone back even from the brink of death.[30]

Oathgates
These fabrials manipulate the Surge of Transportation, and allow the user to transport anything on top of the platform and in the control chamber between Oathgates in an instant. However, as far as is known, they function in pairs - an Oathgate in Urithiru only connects to one Oathgate outside, and the Oathgate outside only connects to one Oathgate in Urithiru. They can only be activated by living Shardblades, as wielded by the Knights Radiant.[1] Transportation of more than one person through them requires use of more Stormlight.[31] 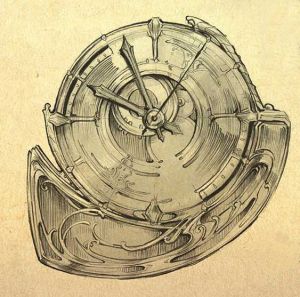 Clock
Rosharan clocks are fabrials, with their mechanisms powered in some fashion by an infused smokestone in their center.[32] They are noted as being rather expensive, although in recent years they have become more and more common.[33][34] Dozens of them can be found in Kharbranth. Many have bells hanging from them to announce the hour.[35] In the past, they came only in standing and hanging varieties.[32][36] Recently, Navani has managed to create a design small enough to wear on one's hand.[37]

Attractor
Used to attract certain substances [38], possibly determined by the gemstone used. During the Battle of Narak, Navani unveils one capable of drawing moisture from the air, pooling the water into a globe around the garnet that powers it. [39] Shallan spots one that gathers smoke from a fire in the Ghostbloods's hideout at the Shattered Plains. [40]

Shardplate
Shardplate is occasionally referred to as a fabrial. It's unknown whether this is accurate, however, as Shardplate appears to operate in a different manner.

Stormclock
The wristwatch that Dalinar receives from Navani includes a stormclock, which might be a fabrial, although it might as well operate purely mechanically. The vambrace is also equipped with a clock and a diminisher painrial, while Navani's own version has a switch that allows it to turn into an augmenter, for self-defense.[37][13]

Gemstone column
There is a column of gemstones in Urithiru's lower level, the purpose of which remains unknown. Renarin speculates that it might be a fabrial allowing the city to operate properly, although if so, it appears to be non-functional.[41]

Threnodite shadow detector
The Ire have a device capable of detecting cognitive shadows from Threnody, which may be similar to a Rosharan alerter fabrial.[42]

This article is still missing information. Please help The Coppermind by expanding it.
Retrieved from "https://coppermind.net/wiki/Fabrial?&oldid=118531"
Categories: