The Order of Truthwatchers is an order of the Knights Radiant on Roshar.[1]

The Truthwatchers are Surgebinders who used the Surges of Illumination and Progression, and they are associated with the emerald polestone. They form a Nahel bond with mistspren.

Those who join the Truthwatchers generally subscribe to a philosophy of finding the ultimate truth and sharing it.[2] The order is concerned with the fundamental truths of the universe, and whether or not those in power are being truthful with the people they lead.[3] A small percentage of Truthwatchers are greatly concerned with the actions of the powerful and might be likened to investigative reporters.[2] The order will make their opinions known loudly and forcefully, particularly if they think someone in power is abusing that power or lying about fundamental truths. They tend to attract scientists, scholars, or thinkers of all types. Divine attributes of the Trutwatchers are learned and giving.

The Ideals of the Knights Radiant, also known as the Immortal Words, are a set of rules by which the Radiants live. The First Ideal is shared by all of the orders, and is used as a motto for the Knights Radiant as a whole. Each of the orders then have an additional four Ideals that are unique to that order.[4] The Ideals of the Order of Truthwatchers all focus on seeking and sharing truth, as well as making sure it is not improperly exploited. However, unlike the Lightweavers, who pursue personal truths, the Truthwatchers are concerned more with uncovering the greater secrets of the universe.[2] 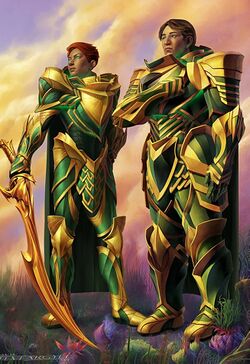 The Truthwatchers use the Surges of Progression and Illumination.

Progression can be manipulated to alter the growth and healing of organisms.[5] It is described as "The Surge of Growth and Healing, or Regrowth". This ability heals the damage done to the body and the soul of a person instantly and without any scarring.

Illumination is used to craft illusions by weaving light, sound and various waveforms.[5] This can be used to change their appearance for disguises or other purposes, create illusions of walls and rocks to hide behind and in, and to create illusions to confuse or distract. There are some differences in how they use the Surge compared to Lightweavers.[6]

This bond also allows the Radiant to see the visions of past and future events.[12][13] Renarin stated that this is because Truthwatchers are unique because "they see".[14] Visions are shown through dark glass and show possible outcomes, but are not always accurate.[15][16] Other people are not able to see this glass.[15] They do not come specifically from Odium, but since their powers come from him it is possible that his desires influence what the visions will show.[15] This also has the added benefit of causing others who see the future to see the Truthwatcher and those close to them as a black spot, as those who see the future cause a conflict in Fortune.[17][18][19] The ability to see the future is related to the Voidbinding chart,[20] though the precise relationship between the powers and Voidbinding remains unclear.[21]

The ancient Truthwatchers were often scientists, scholars and thinkers; this led to them being perceived as quiet and rather esoteric in their pursuits. They tended to be reserved, though a group of them was always dedicated to monitoring the actions of the people in power on Roshar, and making their opinions on said actions heard far and wide if necessary. They particularly concerned themselves with abuse of power, as well as finding out the truth, though what constituted "truth" was a subject of some debate.[2]

Truthwatchers would often engage in enthusiastic discussions on the topic of philosophy, particularly concerning the truth, even if many such conversations would take place only in writing. They were also interested in the more obscure crafts and sciences, such as new fabrials or technologies.[2]

Modern Truthwatchers are few and far between, scattered around the world rather than united.

“Now, as the Truthwatchers were esoteric in nature, their order being formed entirely of those who never spoke or wrote of what they did, in this lies frustration for those who would see their exceeding secrecy from the outside; they were not naturally inclined to explanation; and in the case of Corberon's disagreements, their silence was not a sign of exceeding abundance of disdain, but rather an exceeding abundance of tact.”

This article is still missing information. Please help The Coppermind by expanding it.
Retrieved from "https://coppermind.net/wiki/?title=Order_of_Truthwatchers&oldid=166641"
Categories: