“ They call for a storm. My opposite. Deadly. ”

—The Stormfather to Dalinar during the Battle of Narak.[1]

The Everstorm is a powerful weather pattern on Roshar similar to a highstorm, but one that circles the world in the opposite direction. It was summoned by stormform listeners during the Battle of Narak at the end of the War of Reckoning.[2] The period in which it passes over a given area is sometimes referred to as the Evernight.[3]

Where regular highstorms are commanded by the Stormfather and carry with them Honor's Investiture, the Everstorm is of Odium. It travels from west to east, opposite the direction of traditional highstorms.[2] The Everstorm's clouds are black, and it strikes with red lightning. It lacks a stormwall at the front, and carries neither debris nor crem, only billowing smoke and darkness.[4] Much like the highstorm, the Everstorm doesn't reach high enough to threaten Urithiru, though even up there, its passing is accompanied by a wave of unnatural cold.[5]

The inside of the Everstorm is completely dark, filled with ash carried by violent winds.[4] This being said, even within a single passing, the conditions within vary greatly. Sometimes, there is no wind, only lightning; other times, it rains, and yet other, burning embers fall from the skies instead.[6] Where the Everstorm's lightning hits appears to be under either Odium's or some other entity's control, as it's capable of targeting individual buildings.[7]

Just what commands the Everstorm is uncertain. Pattern suggests it's a spren of some kind serving Odium.[8] Odium himself can exercise a level of control, stopping the storm at will.[9] Whether there is some separate entity commanding the Everstorm is left ambiguous, and if such a spren exists, it has yet to make itself known.[10]

The Everstorm travels at roughly 120 miles per hour[11], about a third the speed of a Highstorm. It takes roughly nine days to circle the entire globe, three of which it spends crossing the Rosharan continent.[12][13] Its time of arrival does fluctuate slightly, and precise predictions can be inaccurate. Fortunately, its high visibility and lower speed give the people of Roshar plenty of time to seek shelter.[14] It is not yet clear whether the Everstorm's frequency is affected by the time of the year or other variables. 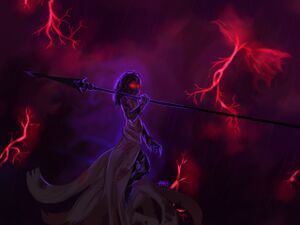 by mushimallo
A Fused in the Everstorm

The Everstorm is a paramount threat to Rosharans, mainly because of its destructive power and direction of movement. All structures and houses on the continent are built in a way that protects them from the westward-blowing highstorms, while allowing for little protection on the leeward side -- the side the Everstorm now strikes from. This makes areas once thought safe, such as laits and mountainsides, utterly defenseless.[17] The consequences of this are readily apparent after just a single passing of the Everstorm, with once-wondrous cities like Thaylen City ravaged and turned to rubble.[7] The advent of the Everstorm also threw off the normal highstorm schedule by about four months.[11]

When the Everstorm and the highstorm clash the effects are even more destructive, becoming more and more powerful until they pass by and return to normal.[18] Where the two meet, entire swathes of land can be destroyed, with whole plateaus of rock launched high into the sky.[19] To be on the ground when the two storms meet is a death sentence.[5] Fortunately for Rosharans, after the Battle of Narak the two storms, either accidentally or by the Stormfather's design, never passed each other over populated areas.[20]

The Everstorm has numerous magical effects. It attracts stormspren and, presumably, other voidspren.[21] It also carries the Fused, souls of long-dead singers who serve Odium in numerous lives.[22] Through an Everstorm, the Fused can possess any singers who open themselves up to them, killing the original mind and replacing it with themselves while retaining abilities and use of Surges of the Fused.[4] In the previous Desolations, the Fused would be sent back to Braize upon their bodies' death and return by an unknown means; during the True Desolation they return to Braize and instead return via the Everstorm, allowing them to be reborn as many times as there are singer bodies available for them.[22]

Finally, the Everstorm releases any parshmen who come into contact with it from slaveform, restoring their Identity and Connection.[23] Such reawakened singers take on a non-slave form. The seemingly random forms they take on are ordinary ones rather than Odium-fueled Regal ones.[24]

The Everstorm did not exist prior to the True Desolation, although the underlying mechanisms were already in place.[2] Its arrival was, however, predicted multiple times by the end of the Era of Solitude, both in numerous Death Rattles and in Dalinar's visions. On most occasions, it was listed alongside with the True Desolation and the Night of Sorrows.[25][26] Renarin likewise had numerous visions about the Everstorm's arrival, though without its name, complete with a precise countdown to its coming.[27]

The storm first took shape in Shadesmar centuries before its arrival in the Physical Realm, and its appearance was partly what drove some spren to begin searching out bonds to refound the Knights Radiant.[28][29] 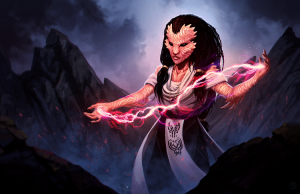 by Ashley Coad
Venli in stormform
For more information, see Battle of Narak.

The real possibility of summoning a storm was first put forth by Venli when researching stormform.[30] After assuming the form, Eshonai confirmed it as a possibility, although she either believed or claimed to believe that what she suggested was an ordinary highstorm. Without consulting with the ruling Council of Five, she planned for every able-bodied listener to take on the stormform and call the Everstorm into existence.[31]

As Alethi forces approached Narak, the listeners awaited them and began a song that would summon the Everstorm. Rlain warned Dalinar that the song mustn't be allowed to finish under any circumstances, leading Dalinar to order Adolin to stop it.[21] Adolin and his forces launched an attack on the singing listeners, and although they managed to slaughter the singers and defeat Eshonai, they were too late.[1]

The resulting Everstorm arrived from the west and clashed with the highstorm over Narak, leading to widespread destruction. Although Shallan managed to transport most of the Alethi units to Urithiru, sparing them from the worst of the clash, those who did not make it onto the Oathgate platform in time were killed.[19][32]

The Everstorm then became a new regular fixture of Roshar's weather system, coming in regular nine-day intervals.[13] In its first passing, it devastated numerous cities in its wake, with particular focus on Thaylen City, which Odium was preparing for an upcoming battle.[6] It also restored Connection and Identity to the parshmen, ending slaveform.[23] In subsequent passings, the Everstorm allowed the Fused to enter the Physical Realm.[23][4]

Odium brought the Everstorm with him to the Battle of Thaylen Field, using it to bring his fleet closer to the Thaylen shore before stopping it just outside of the city.[9] Following the battle, the Everstorm dissipated, although it later returned back to its regular cycle.[15][16]

This article is still missing information. Please help The Coppermind by expanding it.
Retrieved from "https://coppermind.net/wiki/Everstorm?&oldid=163858"
Categories: