“Forms of power, yes, but also forms of obedience. The gods commanded, and we did obey, always. Always. ”

Regals are singers who bond with Voidspren, granting them a transformation called a form of power. In the Voidbringer hierarchy, they are ranked above common singers, and below the Fused.[2] Singers sometimes formally refer to Regals as Chosen.[3]

To become a Regal, a singer has to bond a Voidspren; a non-sapient variety is used for this purpose.[4] The form is assumed much like any other, by stepping into the storm with the mindset to bond an appropriate spren. Unlike a Fused possession, a form of power can be taken on both in highstorm and the Everstorm.[5][6] In some cases, Odium may force a Regal form upon a singer personally while the latter is in the Everstorm.[6]

During the False Desolation, Ba-Ado-Mishram was able to Connect to all singers on Roshar and grant a large portion of them forms of power as well as Voidlight. This is no longer possible since that Unmade is now imprisoned in a gemstone.[7]

The forms of power come in many different shapes; their precise number is unknown, though higher than ten.[8] Regardless, they can always be recognized by having red eyes, as opposed to typical singer black.[9][10] Historically, they were associated with Voidlight and Ba-Ado-Mishram, though neither is necessary for their functioning.[11][12]

Unlike ordinary forms, Regals possess powers that are explicitely supernatural, from shooting lightning from one's hands to understanding and speaking every language in the world (as such, a kandra wouldn't be able to mimic a Regal).[13] These powers do not seem to require any sort of external Investiture input, but at least some are powered by Voidlight.[14][2][15] They are also generally stronger than normal singers or humans, including forms not intended for fighting.[16] Moreover, in contrast to Fused possession, taking on a form of power does not strip the host of their personality, though it can alter their way of thinking.[17]

On the other hand, the Regal form can be directly spoken to by Odium, though this seems to only occur if the singer is caught in the Everstorm.[18] Odium is also able to exert a significant amount of control over Regals, in a manner similar to the influence Ruin has over those with Hemalurgic spikes.[19] Most notably, they tend to become more aggressive[14] and have an exceptionally difficult time hearing ordinary Rhythms, instead hearing those related to Odium.[9][2] It is possible that Odium can force Regals to obey him.[1] Despite their ties to Odium, Regals are not immune to effects tied to another Shard, such as being pulled into one of Honor's visions by the Stormfather.[9]

Most forms of power are only known through listener songs; several were recorded in the Song of Secrets, the Song of Histories, and the Song of Winds. There are more than ten total.[8]

The Song of Secrets implies that nightform Regals have precognitive abilities, presumably relating to the property of Fortune.[20][21] Lezian posted nightform Regals to guard Lirin and Hesina in Urithiru, likely at Raboniel's suggestion.[22]

“Decayform destroys the souls of dreams.
A form of gods, to avoid it seems.
Seek not its touch, nor beckon its screams, deny it.
Watch where you walk, your toes to tread.
O'er hill or rocky riverbed
Hold dear to fears that fill your head, defy it. ”

“Smokeform for hiding and slipping between men.
A form of power, like human Surges.
Bring it 'round again.
Though crafted of gods,
It was by Unmade hand.
Leaves its force to be but one of foe or friend. ”

“Smokeform for hiding and slipping 'tween men.
A form of power—like Surges of spren
Do we dare to wear this form again? It spies.
Crafted of gods, this form we fear.
By Unmade touch its curse to bear,
Formed from shadow—and death is near. It lies. ” 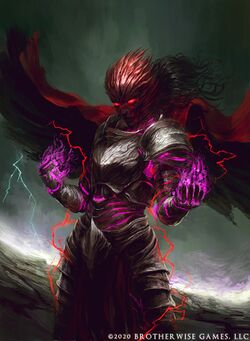 by Ari Ibarra
A singer in stormform

Stormform is the first form of power to be rediscovered in the present times, as the listeners sought to find a way to defeat the human invaders.[27] The form has little armor; rather, the singer's skin is covered in rows of protective ridges that poke out through the skin, which stretches tightly in some places. It causes the wearer to become more aggressive, callous, and filled with a sense of superiority over others.[14] Stormform is the result of a singer bonded with a stormspren.[28]

Despite looking comparatively lithe, a stormform Regal is in fact significantly stronger than a warform singer, being able to leap across the chasms of the Shattered Plains without a running start.[14] Moreover, the form allows a singer to create red lightning in their hands and shoot it at a considerable distance, though with little control. Enemies touching a stormform will also be electrocuted. With some focus, the form also allows for control over wind; a group of stormform singers working in unison is capable of calling forth the Everstorm.[29] Stormforms needs time to charge before they can release a lightning. Thus, the weakness of stormform is water, as they are unable to build up the electric charge when being wet.[30]

When Eshonai took stormform, she experienced screaming in her head which intensified upon attuning the Rhythm of Peace. This is related to something happening with Roshar.[31]

Envoyform isn't described in any known songs. A singer in envoyform is extremely tall, standing above even Alethi humans and stormforms, though still shorter than a Fused.[2] The form grants very little in the way of armor, but much in the way of decoration, as an envoyform possesses long hair and more pronounced sexual characteristics, such as breasts for femalen singers, despite the form being apparently still asexual.[6] Though the form is not as physically powerful as others, it is incredibly nimble and noticeably stronger than the average human.[9]

Envoyform grants a host of supernatural abilities, though most of them go unexplained. The most notable one, however, is the ability to speak, read, and understand any language, whether human or singer.[2][32] The ability presumably uses the power of Connection; it takes several sentences before the singer can learn a language, whereupon they feel as though the words blur in their mind before shifting into something understandable.[6] Thanks to this power, the envoyform's primary purpose is that of a translator--as well as a propagandist--for the Voidbringer forces.[2] Another common use of the form is as a Voice of a Fused, because of its ability to speak the ancient Fused language.[33]

Direform is a form of power taken by some Regals in the occupation of Urithiru.[34] This form has a crest of spikes on its head and neck. The abilities of this form are unknown.

Relayform is a form of power taken by some Regals serving Raboniel during the occupation of Urithiru.[35] It is a sleek form often worn by scouts.

This article is still missing information. Please help The Coppermind by expanding it.
Retrieved from "https://coppermind.net/wiki/Regal?&oldid=150005#Stormform"
Categories: