Glys is a mistspren on Roshar. He appears as a red crystalline structure, and forms a Nahel bond with Renarin Kholin. This grants Renarin the ability to use the Surges associated with the Order of Truthwatchers. Prior to forming the bond,[2] Glys was corrupted by the Unmade Sja-anat.[3] 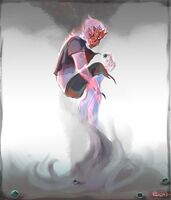 by rspixart
Glys, as he might appear in Shadesmar
For more images, see /Gallery.

“My sorrow, Renarin. I will give you my sorrow. ”

Glys takes the form of a bright red crystalline structure, resembling a snowflake, which shimmers and drips light upwards.[4] This is not the form of normal mistspren, who appear as light reflected through crystal on a surface.[5][6][7] His altered appearance is the result of Sja-anat’s corruption,[3] and he intentionally tends to stay invisible or hidden within Renarin.[8][1]

As a Shardblade, Glys is long and thin, with almost no crossguard. There are waving folds to the metal, like it had been forged.[9]

Little is known of his personality, other than that he is excitable and optimistic.[10][1] 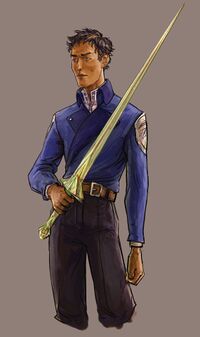 by Marie Seeberger
As Renarin's Blade

Even as a corrupt mistspren, Glys is able to grant Renarin access to the Surges of Progression and Illumination. It is not known how many Ideals Renarin has spoken, but their bond has progressed to the point where he is able to summon Glys as a Shardblade.[9]

Due to Sja-anat’s influence, the bond with Glys also gives Renarin the ability to see visions of the future (which is typically of Odium). These visions are often but not always accurate, and appear as sequences of stained glass panels on the walls or floors, sometimes with numbers or words beneath them. Neither Glys nor Renarin are able to control when these visions strike, although they can capture and replay the visions with some effort.[2][10][1]

Glys has the ability to hide himself, even from people who would normally be able to see invisible spren (such as Rock).[11]

Glys was corrupted by Sja-anat before bonding Renarin, though he does not remember this event very well.[2] Sja-anat has referred to this process as Enlightening.[12]

Although it is unclear precisely when Glys and Renarin formed the Nahel bond, the process was already underway when Adolin gifted Renarin with the Shardblade he won from Salinor Eved. The bond was also strong enough around this time for Renarin to be able to see visions of the Everstorm's imminent arrival.[9][13]

Renarin initially thought something was wrong with him when he was able to hear dead Shardblades screaming,[9] but eventually Glys explained to him that he was a Truthwatcher.[14]

Refounding of the Knights Radiant[edit]

The bond with Glys made Renarin one of the first four members of the refounded Knights Radiant, along with Shallan, Kaladin, and Dalinar.[14]

While initially Glys was unsure if it was possible, he was able to manifest as a Shardblade not long after they arrived in Urithiru. Renarin showed this to Adolin and returned his dead Shardblade to him.[9] When Shallan was searching for Re-Shephir in the library of Urithiru, Renarin and Glys accompanied her, along with Adolin and the rest of Bridge Four. Glys was frightened by the sense of wrongness and refused to speak.[15] 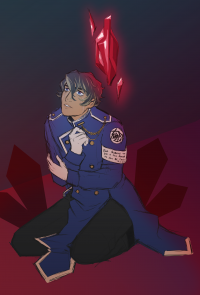 Visions of the Future[edit]

During the Battle of Thaylen Field, Jasnah tracked Renarin and Glys down at the Temple of Pailiah'Elin. This was the first time that Glys was visible to someone other than Renarin. Jasnah and her spren Ivory were able to verify that his appearance did not match that of a normal mistspren, verifying that he had been corrupted.[4] Renarin, undergoing a fit, was shown visions of what he believed to be the future. Glys feared for their safety, as both of them saw a sequence of images showing Jasnah killing Renarin with her Shardblade. During the same fit they saw Dalinar giving in to Odium and kneeling before him. Upon seeing this, Glys expressed his sorrow to Renarin.[2] Jasnah, however, did not kill Renarin, which brought him to the realization that the visions he and Glys saw could be wrong.[16]

When Renarin and Glys approached the ramp to Thaylen City’s Oathgate to try and open it, another fit struck him. He and Glys were able to see in the ensuing visions that a division of Kholin troops was about to arrive through the Oathgate, activated by Teft, now a Knight Radiant.[10]

Around a year later, Renarin and Glys accompanied the army belonging to the coalition of monarchs as they marched on Odium's forces in Emul. Dalinar sought out Renarin one evening at the Bridge Four cookfire, and they discussed a recent vision of Glys and Renarin's. Glys expressed to Renarin that he didn't think their visions were necessarily from Odium, though he admitted Odium's desires might be tainting what they saw. He was also worried by the lack of communication from Sja-anat, and he thought she was somewhere close by.[1]

Glys, having captured the vision as it had come to them, excitedly replayed it so Renarin could describe it to Dalinar. He made sure Renarin mentioned the blackness that showed in the stained glass so Dalinar would know that his proximity to the two of them was a protection from Odium's own future sight.[1]

Glys was optimistic regarding their ability to deal with the ingrained fear people had towards those who could see the future, though Renarin was less so. He also prompted Renarin to mention to Dalinar that there were other spren touched by Sja-anat that wished to bond humans, and noted that they needed more pairs like the two of them, as they existed outside of the favor of either men or singers.[1] Glys asked Renarin if he knew of anyone who would be worthy, so Renarin asked Sja-anat to consider Rlain; the Unmade sent Tumi to evaluate him, and they eventually bonded.[1][17]

This page is probably complete!
This page contains most of the knowledge we have on the subject at this time.
It has yet to be reviewed.
Retrieved from "https://coppermind.net/wiki/Glys?&oldid=153116"
Categories: