“Re-Shephir, the Midnight Mother, giving birth to abominations with her essence so dark, so terrible, so consuming. She is here! She watches me die! ”

Re-Shephir is a Rosharan Unmade, one of nine Splinters of Odium.[2] She is commonly referred to by the title of the Midnight Mother.[1] She is also likely the Unmade whom Jezrien calls the Spawning Mother.[3]

Re-Shephir is an oily-black entity capable of taking various different forms, including humanoid, beastly and some that do not mimic living beings.[4][5] She's not entirely cognizant, instead being driven by instinct. Humanity fascinates her; she strives to understand it, although she is mostly drawn to people's violence and pain.[6] As an expression of this fascination, she recreates acts of murder and assault down to the smallest detail, and shapes her creations after what she observes.[7][4] She is fearful of Lightweavers, having been imprisoned by one in the past. When assaulted directly, she stands her ground and attempts to defend her nest, but flees when it becomes clear that she cannot win.[6] 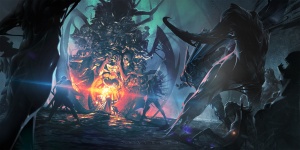 by Petar Penev
Re-Shephir and the Midnight Essence

Re-Shephir is capable of shapeshifting, including altering her size. She appears to have very little limitations on what form she takes and is unburdened by the biology of the entities she copies, being able squeeze through tiny gaps that no human could fit through even in a humanoid form. This being said, Re-Shephir retains her characteristic uniform, oily-black color regardless of her current shape.[4][5] She seems unable to mimic natural sounds; the only noises she's heard making are alien-sounding screeches when she feels threatened.[6]

She can create entities called Midnight Essence that look much like her and may be why she is nicknamed the Midnight Mother. The Midnight Essence can take various forms, both humanoid and beastly, but don't appear to share their mother's shapeshifting abilities. Apart from the color and texture, Re-Shephir can make Midnight Essence resemble specific people she has seen - at least in appearance, as there is no indication that she can replicate voices or behavior.[5] It's unclear whether Re-Shephir can command the Midnight Essence directly; however, her creations are universally hostile to humans and devoted to defending her, and can operate autonomously.[5][8]

It's possible that Re-Shephir is capable of forming a Nahel bond with humans. She seems to have the capability to destroy a Knight Radiant's spren bond and replace it with herself. Whether that would function in the same manner as a proper Nahel bond, or even function at all, is uncertain.[6] 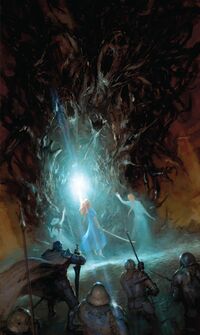 Re-Shephir was unmade sometime during the Heraldic Epochs, or perhaps before then, by Odium. Shallan believes her to have originally been a creationspren.[6] Though originally, her sole purpose was to sow chaos and unrest among humans through her spawn, she eventually came to be intrigued by mankind, and began to mimic them.[6] Though it's uncertain whether she remained active between the Desolations, the Midnight Essence she created were a constant threat.[9] Along with several other Unmade, she was believed to have been destroyed in the Aharietiam.[10]

Unfortunately, that was not the case. At some point before the Recreance, she infiltrated Urithiru, and was subsequently captured and imprisoned by an unknown Lightweaver.[6] Her appearance caused the inhabitants of the tower considerable distress, as an Unmade entering the most sacred structure on Roshar cast doubts upon its security.[11] After Urithiru was abandoned, Re-Shephir eventually broke out of her confinement; however, rather than depart, she chose to remain within the city, and took up residence in one of the chambers near the Urithiru gem archive. There, she coiled around a column of gemstones.[5] Shallan theorizes that if Ba-Ado-Mishram's gemstone prison was located in Urithiru, Re-Shephir would have found it during these centuries of controlling the tower.[12] During this occupation, the Sibling remained hidden and never fought back, so Re-Shephir thought they had died.[13]

Shallan Davar detected her presence within days of entering the tower, albeit she registered it only as a sense of unease that twisted her perception of Urithiru.[14] Re-Shephir, on the other hand, became active almost immediately after the Alethi arrived. Her first confirmed action was killing Vedekar Perel in a way that mimicked the murder of Torol Sadeas[7] Later, she injured Lunamor in the same way that Shallan had previously wounded another Unkalaki, Ur. However, moments before the latter incident she accidentally revealed her presence to Shallan when she came out of the shadows to observe her play of The Girl Who Looked Up, mingling with Shallan's illusory audience but not escaping quickly enough when they were dispelled.[4]

Bridge Four, accompanied and led by Shallan and Adolin Kholin, managed to track her down to her nest. There, she defended herself by summoning Midnight Essence in the forms of her attackers.[5] During the ensuing confrontation, Shallan managed to make direct contact with Re-Shephir. The Unmade initially attempted to displace the Lightweaver's bond with Pattern with herself; failing that, she was in turn attacked by Shallan and fled through an underground passage that led out of the tower.[6] The sensation of wrongness that had permeated Urithiru before evaporated after her departure.[15]

Re-Shephir's current whereabouts are unknown, however she has been in contact with the Fused. Raboniel and her scouts knew that she had felt that the Sibling was truly dead while she occupied the tower.[16]

This page is probably complete!
This page contains most of the knowledge we have on the subject at this time.
It has yet to be reviewed.
Retrieved from "https://coppermind.net/wiki/Re-Shephir?&oldid=175029"
Categories: