This page or section needs to be updated with new information for Rhythm of War!
Be aware that in its current state, it may not include all additional content yet.
This article deals with the order of Knights Radiant. For the novella featuring Lift, see Edgedancer (novella).

The Order of Edgedancers is an order of the Knights Radiant on Roshar.[1]

The Edgedancers were Surgebinders who used the Surges of Abrasion and Progression,[2] and they are associated with the diamond polestone. They bond cultivationspren.

Edgedancers generally subscribe to a philosophy of remembering the ordinary people of the world.[3][4] The order considers it their solemn duty to remember that the people are the ones they truly serve. They even aspire to remember and hear their enemies, as their stories could provide insight.[5] Edgedancers see it as their duty to care for the common folk and improve their daily lives and are similar to Samaritans.[6] They tend to attract religious people and leaders and those who advocate for ordinary people.[3]

The Ideals of the Knights Radiant, also known as the Immortal Words, are a set of rules by which the Radiants live. The First Ideal is shared by all of the orders, and is used as a motto for the Knights Radiant as a whole. Each of the orders then have an additional four Ideals that are unique to that order.[7] The Ideals of the Order of Edgedancers all focus on remembering and advocating for ordinary people.[3]

“I will remember those who have been forgotten. ”

—The Second Ideal of the Edgedancers, as sworn by Lift[4]

“I will listen to those who have been ignored. ”

—The Third Ideal of the Edgedancers, as sworn by Lift[8] 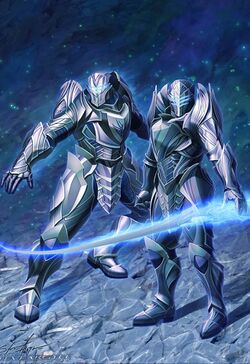 “When Simol was informed of the arrival of the Edgedancers, a concealed consternation and terror, as is common in such cases, fell upon him; although they were not the most demanding of orders, their graceful, limber movements hid a deadliness that was, by this time, quite renowned; also, they were the most articulate and refined of the Radiants. ”

The Edgedancers use the Surges of Abrasion and Progression. Lift's ability to metabolize food into Lifelight is an unique exception relating to the Old Magic and not a standard ability of Edgedancers.[9]

Abrasion grants them the ability to manipulate friction.[2] They can apply this in different ways. In close range combat, this ability can make them hard to be stopped or grabbed. When used to decrease wind friction and friction on feet, they can travel long distances at considerable speeds, though keeping balance without friction requires a lot of practicing. They have been described, poetically, as being able "to ride the thinnest rope at speed, dance across rooftops, and move through a battlefield like a ribbon on the wind."[4]

Progression allows them to make plants or other organic objects grow much faster than normal.[2] They can also heal, and although the extent of this ability is unknown, it seems that the wielder is even able to heal others from wounds suffered from Shardblades.

“The Edgedancers are too busy relocating the tower's servants and farmers to send a representative to record their thoughts in these gemstones.

I'll do it for them, then. They are the ones who will be most displaced by this decision. The Radiants will be taken in by nations, but what of all these people now without homes?

The Edgedancers considered it their solemn duty to remember that they were servants of the people, and saw it as their duty to care for the ordinary people of the world. Before the Day of Recreance, the Edgedancers often had permanent assignments to live in towns across Roshar, providing healing with the Surge of Progression and otherwise assisting the community.[3] When the Radiants decided to abandon Urithiru, the Edgedancers were too busy relocating the city's servants and farmers to send anyone to record a message in the gem archive the other Radiants left behind.[10] Despite their lack of interest in high society, they were often the most graceful and refined of the Radiants.[1][3] Some felt that the Edgedancers ignored important things too much and considered them small-minded.[4]

Though they became renowned for their deadliness,[1] when forced into battle, the Edgedancers preferred to function as medics or rescue trapped allies.[3] When they fought, however, they were considered some of the most graceful fighters, and they occasionally functioned as scouts of joined a special forces team with Windrunners and Skybreakers.[1][4][3]

The Edgedancers were generally the most religious of the Radiants.[3]

This article is still missing information. Please help The Coppermind by expanding it.
Retrieved from "https://coppermind.net/wiki/?title=Order_of_Edgedancers&oldid=160774"
Categories: