The first Surgebinders came to be as a result of spren trying to imitate what Honor had given his Heralds. The spren formed bonds with the mankind to give them Surgebinding abilities.[5] Honor was surprised by their coming, because he hadn't taught it to his Heralds.[5] These Surgebinders were later formed into the ten orders of the Knights Radiant by the Herald Ishi'Elin, for the purpose of watching for the coming Desolations, and helping men fight, then rebuild the society from the destruction of the Desolations, and they adopted the city of Urithiru as their center of power.[6] For a long time, they maintained their duty, until eventually they abandoned it on what is now known as the Day of Recreance,[7] and possibly even turned against their wards, as some legends say.[8] This betrayal caused many spren to die, their corpses becoming tools of destruction, and as a result they stopped granting humanity Surgebinding.[9] 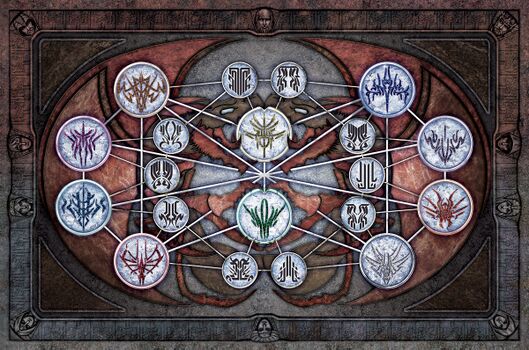 Each order corresponded to a Herald, and all of them except the Bondsmiths roughly correspond to an Unmade, though it is not entirely a one to one relationship.[12]

Order of Dustbringers
Dustbringers - or as they prefer, Releasers - bond with ashspren, which gives them the ability to use the Surges of Division and Abrasion.[13] Their powers tend to be destructive.[15] Dustbringers are associated with the ruby polestone, the essence of Spark, and the Herald Chanarach.

Order of Bondsmiths
Bondsmiths bond with three unique spren—the Stormfather, the Sibling, and the Nightwatcher—which gives them the ability to use the Surges of Tension and Adhesion.[13] Bondsmiths are associated with the heliodor polestone, the essence of Sinew, and the Herald Ishar.

Many orders of the knights are able to grant the ability to use Stormlight and some of their Surges to people, possibly those capable of becoming knights themselves. It appears that potential squires must have a mindset that matches at least partly with the requirements of the order. For Windrunners this appears to be a mental state geared to protection. Many squires recite the First Ideal before gaining Surgebinding, but this is not required. Each order follows a path and with a Knight willing to help the first steps can be taken before Bonding a spren themselves. This shows the spren what people are good candidates for each order, and reducing the chance that a spren will die from failed oaths. Time as a Squire also allows a person to practice Surgebinding before gaining a Nahel bond.

The powers of a squire are tied to a particular Radiant and their spren, and without their presence, a squire cannot draw in Stormlight to Surgebind, even if another full Knight of the same order is present.[22] Squires must be within approximately fifty miles of their Radiant to use their powers, although they begin to weaken once they are separated by thirty miles or more.[23] While it has been said that some orders may not have squires,[24] the Windrunners,[25] Skybreakers,[26] Dustbringers,[5] Lightweavers,[27] Willshapers,[28] Stonewards,[29] and Bondsmiths[30] are known to have squires.

For a full list of all the Ideals, see /Immortal Words. 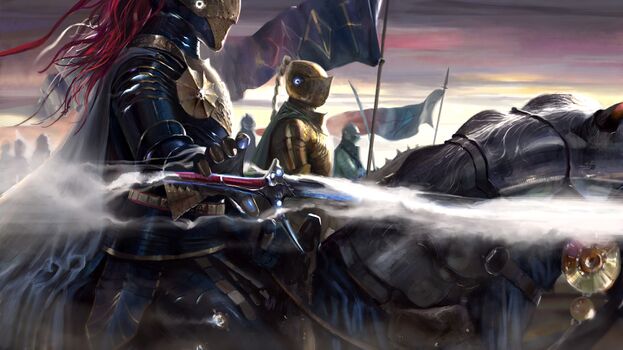 The Ideals of the Knights Radiant, known as the Immortal Words, serve as a guide for the Radiants' actions and lives.[31] Each order of Radiants has five Ideals, though different Radiants from the same order may swear an ideal with slightly different words and Lightweavers swear more individualized truths instead of ideals.[32] The wording of the First Ideal, however, is exact and is used by all orders, including the Lightweavers.[33][34] It acts as a motto and guide for the Radiants as a whole,[31] and is known as the Ideal of Radiance by the Skybreakers,[26] who may have carried the name over from the ancient Radiants. The unique Ideals of each order are designed as a progression that develops a Radiant's character toward the central concepts of their order.[35] The Stormfather and Cultivation have some discretion in deciding whether or not a Radiant has progressed enough that their oath can be accepted,[36][37] though this discretion appears to be limited.[38] It is unclear whether or not the Stormfather had this ability prior to Honor's Splintering, but it seems likely it was instead Honor's decision at this time.

As a Radiant swears additional Ideals, they gain their Shardblade and Shardplate (though the Ideal at which these are received is not the same for all orders)[39] and become more efficient in their use of Stormlight.[31] Additionally, some orders cannot use one of their Surges until they swear a higher Ideal.[36][40] Swearing the Fifth Ideal, also known as the Final Ideal, makes the Nahel bond between Radiant and spren so strong that it can only be broken by death; until that point, there are apparently safe ways to break the bond.[41] Swearing the Fifth Ideal is generally not necessary to be considered a full Knight Radiant and is such a difficult process that the Order of the Skybreakers has not had someone swear the Fifth Ideal for centuries.[26]

Ideals must be sworn in order, even if a Radiant is ready to swear a higher ideal than the one they cannot currently swear.[42]

This article is still missing information. Please help The Coppermind by expanding it.
Retrieved from "https://coppermind.net/wiki/?title=Knights_Radiant&oldid=167746#Immortal_Words"
Categories: