“Life breaks us, Teft. Then we fill the cracks with something stronger. ”

Phendorana is an honorspren on Roshar. She has some level of importance or authority among her kind.[3] She bonded Teft during the True Desolation.[4]

In the Physical Realm, Phendorana takes the form of a human-sized older woman with long hair.[3][4] This is noticeably larger than other honorspren such as Rua and Sylphrena, who usually appear to be about a handspan tall.[5][6] Her clothing initially looks like an elegant gown, but after bonding a Windrunner she is seen in a practical Thaylen-style skirt and blouse.[3][7] Her hair moves as if blown by a phantom wind, and curls and disappears into mist.[4][8] Although she is not seen in the Cognitive Realm, she presumably has a similar appearance there.[9]

Teft describes Phendorana as tenacious and a bit cantankerous, although she also has a warm side.[10][7] Syl vaguely recalls Phendorana reprimanding her when she was searching for Kaladin, implying that Phendorana has a leadership role among the honorspren.[3] Lopen says that Phendorana sometimes lectures her fellow honorspren.[11]

Like other honorspren, Phendorana is a Splinter of Honor.[12] She has minimal substance in the Physical Realm, and glows with a blue-white light. She is able to change her form at will; although she prefers to be human-sized, she sometimes becomes smaller for convenience.[10] She can float above the ground rather than walking on it.[1] She can choose to be visible or invisible to humans, with a few exceptions such as Lunamor.[13]

She is also able to form a Nahel bond, increasing her sentience in the Physical Realm and granting a bonded human abilities of the Order of Windrunners, including the Surges of Adhesion and Gravitation.[14] She can speak directly into the mind of her bonded Radiant.[4]

According to Notum, all of the honorspren except for Syl became deadeyes on the Day of Recreance. The Stormfather created ten more honorspren after several hundred years of mourning, and Phendorana was either among those ten spren or was descended from them.[15]

Syl recounted getting into trouble with Phendorana and the other honorspren when she started seeking Kaladin, as spren had generally shied away from the Nahel bond since the Recreance.[3][16] It is likely that Phendorana was aware of a large reward that had been offered for Syl's capture and return to Lasting Integrity.[17] After Kaladin and other humans began bonding spren once again, Syl believed that Phendorana decided to ignore her because she did not want to admit that she was wrong.[3] 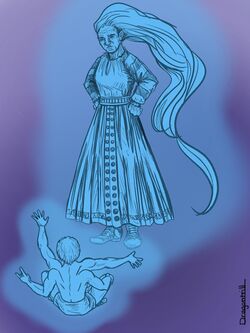 In 1174, Lunamor noticed Phendorana watching the Windrunner squires and hopefuls of Bridge Four training on the Shattered Plains.[3] Lunamor was the only person who saw her, due to his ability as a Sighted, or alaii'iku, that allowed him to see spren that were invisible to other people.[13] She was surrounded by several dozen smaller honorspren, more than Lunamor had ever seen in one place.[3] Lunamor referred to Phendorana as "ali'i'kamura", the most important god present;[3] he had previously mentioned ali'i'kamura as a god that could offer protection from danger.[18] He asked Sylphrena if Phendorana was similar to an Unkalaki clan leader called a nuatoma, and she replied "kind of maybe sort of halfway".[3] Lunamor tried to think of a suitable offering, and ruled out bread and stew. He eventually approached Phendorana with a bowl full of Stormlight-infused spheres. Phendorana regarded him, then put her hand over the bowl and drew out the Stormlight before departing as a ribbon of light.[3]

Phendorana chose to bond Teft at some point after she had observed the Windrunners practicing on the Shattered Plains. She was first seen accompanying him in Urithiru prior to the Battle of Thaylen Field. She reminded him that he still had more progress to make swearing the Immortal Words. Due to his ongoing shame regarding his firemoss addiction, Teft resisted her support, and was hesitant to reveal their bond to the rest of Bridge Four.[4] Teft panicked after learning that selling his Bridge Four uniform had contributed to Eth's death, but Phendorana refused to abandon him and instead encouraged him to live up to his oaths.[8] This led to Teft swearing the Third Ideal of the Windrunners, allowing Phendorana to become a living Shardspear.[2][19]

After Teft swore the Third Ideal, he revealed Phendorana's presence to the other Knights Radiant, although she generally preferred to remain hidden from sight.[20] Lopen was aware that Phendorana had authority among honorspren and wondered if she was behind the failure of his previous attempts to swear the Ideal using the same wording as Kaladin and Teft.[11] Lopen was later able to swear the Third Ideal after experiencing personal growth,[21] implying that Phendorana was not to blame for the delay.

When Raboniel was able to partially block the powers of the Knights Radiant, Teft was incapacitated and Phendorana disappeared from the Physical Realm; she could not be sensed by Syl.[22] After Teft was revived, he had difficulty summoning Phendorana and she had no memory of what had happened.[7] Like other Windrunners, Teft could not use the Surge of Gravitation, and Phendorana could not become a Shardweapon.[22][7]

Phendorana was present when Moash ambushed Lift and Teft during their attempt to rescue the unconscious Radiants. Teft and Phendorana were able to briefly overcome the tower's obstruction of their bond to form a Shardspear and block a strike from Moash's Honorblade. However, this left both of them drained, and as they recovered, Moash produced one of the Fused's soul-stealing daggers armed with newly-discovered anti-Stormlight; Raboniel originally intended for the dagger to be used on Syl, but Moash had refused to confront Kaladin.[23] Moash attacked Phendorana directly with the dagger, using white sand to detect her location and stabbing her in the head.[23][1] Phendorana was shocked, and then writhed in pain as her essence seemed to burn and explode outward, permanently destroying her. Teft experienced a ripping sensation in his soul upon her death; he was distraught, but remained hopeful as he was also killed by Moash.[1]

“It hurt so much. Agony like a sudden terrible stillness. Nothingness. Emptiness. ”

A sculpture of Phendorana was commissioned after her death so that it could be placed next to Teft's body, which was Soulcast into stone.[24] Her soul was not destroyed, and could have reached the Beyond.[25]

Teft struggled with firemoss addiction for years, and felt that he did not deserve a spren bond even as his fellow bridgemen gained powers.[26] After Phendorana bonded Teft, they had conversations about his childhood trauma and history with the Envisagers.[27][7] Phendorana understands Teft's tendency towards self-loathing like no one else, and her "crusty" personality matches his very well.[7][10] She does not suffer excuses and is able to push him when he needs it,[10][8] but she can also offer support, encouragement, and affirmations of his worth.[7][10] The two also share lighter moments, and Teft thinks she looks like a little child when she grins.[10]

This page is complete!
This page contains all the knowledge we have on the subject at this time.
Big Smooth (talk) 01:11, 16 January 2021 (UTC)
Retrieved from "https://coppermind.net/wiki/Phendorana?&oldid=172052"
Categories: