“Chana help the man or woman who stood between Navani and one of her own. ”

Chanarach, also known as Chana, is one of the ten Heralds of the Almighty on Roshar, and the patron of the Order of Dustbringers.[4][5] Her current status and whereabouts are unknown, though at least one person has — knowingly or not — met her in recent times.[6] 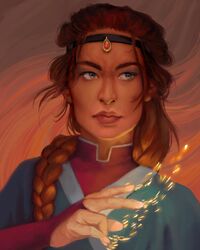 Though Chana is likely of similar age to other Heralds, Vorin artwork tends to present her as a young woman.[7] She was born on Ashyn, and left it for Roshar when the planet was struck by a catastrophe.[8]

When humans and singers went to war, she and nine other people were made Heralds by Honor. Following every Desolation, she would travel to Braize and be tortured there until either she or one of the other Heralds broke, sending them back to Roshar and starting a new Desolation.[9]

At Aharietiam, Chanarach, like the rest, abandoned the Oathpact, leaving her Honorblade at the location of the final battle and departing for parts unknown.[10] What happened to her afterwards is unknown, though she has been seen alive.[6] 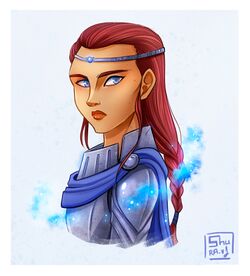 by Shuravf
For the abilities all Heralds share, see Herald#Abilities.

As a Herald, Chanaranach is immortal and capable of returning from death, though at the cost of a Desolation.[9] She was a capable fighter, and wielded an Honorblade that made her a Surgebinder, granting her the use of the Surges of Division and Abrasion.[11] She has discarded her Blade, however, leaving her without Surgebinding.[10]

Perhaps due to her power over Abrasion, Chanaranch is known for being incredibly fast, as Fleet beating her in a foot race is considered a noteworthy achievement.[2]

In Vorinism, Chanarach is known under the symmetrical name Chanaranach, though the diminutive Chana is also used.[4][2] Chan-a-rach is a far rarer spelling, only seen used in a song.[2] She is associated with the number 3 (chach), the Essence Spark, and the divine attributes of Brave and Obedient. Her body focus is the soul.[11] Phrases such as "Chana knows..." and "Chana help (somebody)" are common, and typically related to threat or protectiveness.[2][3] The name Chanada is likely derived from Chana.

As with the other Heralds, there is a temple to her in every modern city.[12][13] This tradition appears to go back to the Desolations, as there was once a temple of Chanaranach in Stormseat.[4]

This article is still missing information. Please help The Coppermind by expanding it.
Retrieved from "https://coppermind.net/wiki/Chanarach?&oldid=168433"
Categories: