“Design! ... What did I tell you about spoiling the ending of stories!”

“Something stupid, so I forgot it!”

Design is a Cryptic from Roshar bonded to Hoid.[2] 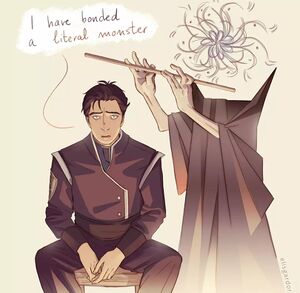 “I get annoyed easily! It's endearing... to everyone but him! ”

Like other Cryptics, Design is a creature with stiff robes and a shifting pattern for a head. Her head pattern is lacy and intricate, and seems to be more fine and graceful than Pattern's. She has a musical, feminine voice. She can flare out her pattern, which is her way of giving a bow.[1]

Design is cheerful and energetic. She gets annoyed easily and considers that to be endearing. She does not mind spoiling the end of stories and considers surprises to be dumb.[1]

Design enjoys annoying Hoid, poking holes in his stories and tricks in front of others. She happily points out when Hoid makes a mistake. She likes getting into arguments with Hoid.[1][3] She however is not a great match for Hoid and both bring out negative aspects of the others personality, she and Elhokar would have gotten along excellently however.[4]

Being a Cryptic, Design is able to form Nahel bonds with humans. This gives the bonded human access to the Surges of the Order of Lightweavers, namely Illumination and Transformation.

“I will give you truths. And I know some juicy ones. ”

In the months or years leading up to his death, Elhokar had been seeing Cryptics, in their Shadesmar form, in mirrors.[5] He seems to have also spotted a Physical form of a Cryptic at some point, possibly Design.[6] While Elhokar was seeing Cryptics in mirrors for a while, he only began saying the First Ideal just before he died.[7]

Design was later rescued from the Fused in Kholinar by Hoid, who found her near the location Elhokar died. Hoid then bonded her.[8][9]

Design was with Hoid when Odium took Kaladin's consciousness to Braize. Design played Hoid's flute while he told the story "The Dog and the Dragon". Design was able to play the flute despite not having lips, moving her fingers randomly and simultaneously holding a conversation with Hoid. She spoiled the ending of the story to Kaladin, which was appalling to Hoid. She argued with Hoid and provided a counterpoint to many things he said throughout the story.[1]

Design had a conversation with Hoid in Elhokar's old palace before Hoid confronted Odium. She argued with Hoid about Lightweaving. She went away with some corrupted windspren when Hoid told her to bother someone else. She was not present when Hoid confronted the new Odium. When Hoid repeated his performance after confronting Odium, he had forgotten that Design already left.[3]

This article is still missing information. Please help The Coppermind by expanding it.
Retrieved from "https://coppermind.net/wiki/Design?&oldid=172307"
Categories: