Elhokar Kholin is the king of Alethkar on Roshar, and the nephew of Dalinar.[5]

“I will figure this out. I will be a king to be remembered. ”

Elhokar is Alethi, with tan skin and epicanthic folds over green eyes.[7][fn 1] He keeps himself clean-shaven. His face is considered very handsome, with full lips, a broad forehead, and a firm chin. He bears some resemblance to his father, though Elhokar has fewer scars than Gavilar did.[5]

Elhokar is deeply paranoid, fearing assassins every since his father was killed by one, and thus wears his Shardplate far more often than other Shardbearers.[8] He also has a strong complex about being compared to his father. He vacillates between extremely spoiled, demanding respect for the sheer fact of being a king, and fearful, keenly aware that he does not measure up as a ruler.[6] He lacks the spine or accomplishments to stand up to Dalinar when the latter starts to take more and more power, and the highprinces often talk around him, with Elhokar himself serving more as a unifying figurehead than a true leader.[9] He has a habit of surrounding himself with sycophants and people intent on using him for their own purposes.[10][11] Perhaps related to that, he seems to have very low self-esteem.

While Elhokar is by no means an exceptional leader, he does have some potential, albeit deeply-buried. Despite his own uncertainty in his ability to rule, he's capable of making decisive action and manages to control the Highprinces, if just barely. He displays a certain sense for politics, and can, display startling insight into the minds of others.[12] Over time, he comes to acknowledge his own flaws and take steps to rectify it, starting by trying to learn by example from Kaladin and becoming more selfless.[4] He's also a devoted husband and father, and though he can't spend much time with his family, he cares for them dearly.[11]

“I see their faces in mirrors. Symbols, twisted, inhuman. ”

By the time of his death, Elhokar is a budding Surgebinder of the Order of Lightweavers, although he passes away before he can finish stating the First Ideal.[11] In the months or years leading up to his death, he's been seeing Cryptics, in their Shadesmar form, in mirrors.[8] He seems to have also spotted a Physical form of a Cryptic at some point -- possibly the spren that intended to bond with him.[13]

He's a Shardbearer, with both a Shardblade and Shardplate. His Blade is called Sunraiser; it's long and thin, with a large crossguard and the ten basic glyphs etched up the sides of the blade.[14][5] He also owns several other sets of Plate and Blade, including Gavilar's Firestorm and his Shardplate. Those are often loaned out for training and duels to lighteyes that don't have their own.[15][16]

He has a fondness for maps; he's constructed a massive gallery of them in the Pinnacle, often studies them, and even draws his own when necessary.[17][18] 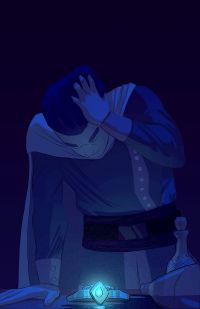 After the assassination of Gavilar, Elhokar vows to avenge his father by waging war against the Parshendi, who claimed responsibility for the king's death. He makes the highprinces swear to the Vengeance Pact to help him in his conquest, thereby managing to keep his kingdom together for now. Due to Elhokar's youth and paranoia his ability to rule was questioned by those under his rule and he maintained a weakened authority over the ten Highprinces. The King's paranoia stemmed from the assassination of his father and he feared that he would meet the same fate, although he overcompensated on the battlefield and often acted recklessly to the dismay of his family and guards.[5] This paranoia was furthered by his ability to see strange creatures (almost certainly Cryptics) in mirrors.[8]

Elhokar's deep fear of assassination caused him to fake an assassination attempt on his own life by cutting the girth strap on his saddle,[14][19] in order to trigger an investigation on those who wish him dead. Although this rash action placed suspicion on his uncle Dalinar, this method did yield results as it was found that weakened gemstones were placed in his Shardplate by an unknown individual.[20]

After recovering from the attempt on his life. Elhokar moves to Urithiru and gives his blessing to Dalinar and Navani's marriage.[21] He later tries to abdicate in favor of Dalinar, but they settle on the title of Highking, giving Dalinar authority over Elhokar and his kingdom. They agree to keep this unofficial until Kholinar has been freed and they are sure Elhokar still has an Alethkar to rule over.[4] 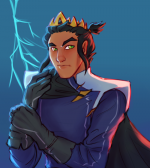 Elhokar is slain in Kholinar while trying to escape to the city's Oathgate with Adolin, Kaladin, Shallan, Skar, Drehy, and Azure. During their escape, the city is invaded by a parshmen army and several Fused. The army kills almost the entire Wall Guard, but it is Moash who slays Elhokar, by stabbing him through the chest and eye. Immediately before his death, Kaladin hears the king begin to mutter the First Ideal, and sees the king start glowing with Stormlight, but the king was not able to finish the words before he was run through by Moash. Later, Hoid rescues a Cryptic hiding near the scene of his death.[22] His body was eventually burned with honors.[23]

As a character, Elhokar is almost as old as Dalinar, and the two had always been nephew and uncle. In the earliest story featuring him, Elhokar, along with proto-Jasnah, is kidnapped when the proto-Gavilar is killed, leaving Jared (the early version of Dalinar) to take the reins of the kingdom. After the prince and the princess are rescued, Jared retains control, taking the time to teach Elhokar how to be a proper ruler.[24]

The next known incarnation of Elhokar appears in The Way of Kings Prime, the first draft of what would become The Stormlight Archive. There, Elhokar participates in the same battle as Merin (proto-Kaladin). Sheneras, the eldest of Dalinar's three sons (since written out) dies to protect him, and when that is not enough, Merin steps in and saves his life, winning Shards in the process.[25] This version of Elhokar is already established as a bad king; at the end of The Way of Kings Prime, Dalinar is forced to kill him. Brandon, however, decided to leave him alive for a short while, deciding that the interplay between the two would be more interesting.[26]

Nonetheless, Elhokar had always been intended to die, even if the circumstances around his death changed.[27] In the final version of the story, Brandon killed him off in order to showcase Moash's descent into villainy.[28]

This article is still missing information. Please help The Coppermind by expanding it.
Retrieved from "https://coppermind.net/wiki/?title=Elhokar_Kholin&oldid=123629"
Categories: