“We are patriots, as I said before. Patriots of Alethkar. The Alethkar that could be. ”

Graves is an Alethi Shardbearer and member of the Diagram, who orchestrated several assassination attempts against Elhokar Kholin.[3]

Graves is a lighteyed Alethi man in his mid-to-late twenties with crisply styled jet-black hair. He is usually impeccably dressed. He claims to be an Alethi patriot.[2]

He has a set of Shards--both Plate and Blade. It is mentioned by Moash that Graves is an excellent shot with a bow and arrow.[4]

Graves is married to a darkeyed woman, and has multiple children--one of which is a "one-eye", presumably affected by heterochromia. He treats all men the same, regardless of eye color and doesn't care what anyone thinks of him, according to Moash.[2]

Graves became a member of the Diagram at an unknown point in the past and developed relationships with Taravangian and other key members. He did not agree with Taravangian's position that Dalinar Kholin would need to be assassinated--instead believing that the highprince should be allowed to take over after the assassination of Elhokar Kholin.[2][5] Taravangian allowed Graves to freely carry out his own interpretation of the Diagram.[6]

On the Shattered Plains Graves began working with Danlan, Febrth, Fia, and Rill to set up the assassination of Elhokar.[1] After recruiting Moash, whom he came in contact with via Rill, Graves was able to make his first attempt on the king's life.[2]

The first plot involved weakening the balcony railing in the king's chambers and allowing the king to "accidentally" fall to his death. The railing was cut with a Shardblade, presumably by Graves himself, shortly after a highstorm, when Moash had an opportunity to discretely allow the saboteur through.[7] Elhokar was able to hold on to the railing after it gave way, however, and was rescued by his guards. Kaladin assesses this plan as both cowardly and stupid because it failed to directly confront the king and could as easily have hurt someone else.[8]

“We didn’t want the actual blood of the king on our hands, wanted to make this seem an accident, but I have realized this is cowardly. I will do the deed myself. All I want is an opening, and Alethkar’s suffering will be over.”

After this failure, Moash introduced Graves to Kaladin one evening at the Ornery Chull, hoping to earn the captain's support. Graves attempted to recruit Kaladin to their cause by appealing to Kaladin's experience as a surgeon. Though hesitant at first, Kaladin eventually agreed to aid in Graves' conspiracy.[4] Graves developed a second plan in which Kaladin would lead Elhokar to a predetermined location where Graves himself would shoot the king with an arrow.[4] 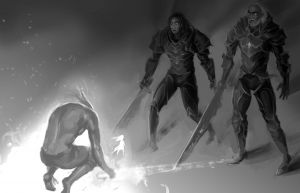 by Mjusi
Facing off with Kaladin

These plans were revised when Dalinar announced his intent to march to the center of the Shattered Plains--leaving the king vulnerable for several days.[9] With this opening, Graves and Moash went to the Pinnacle to assassinate Elhokar directly with their Shardblades. When Kaladin confronted the pair, Graves was frustrated with Moash, who had promised that Kaladin would not interfere. Moash dispatched Kaladin easily, and the two began to argue over who would bear the responsibility of killing the incapacitated king. Kaladin stood in their way again, and Graves ordered Moash to kill his friend. When Kaladin spoke the third Ideal of the Windrunners, Graves fell back in shock and began laughing hysterically after claiming that the Diagram had predicted Kaladin's ascension but they had failed to interpret it correctly.[10][11]

Graves and Moash fled the Shattered Plains in disguise after the Battle of Narak.[12]

After fleeing the warcamps, Graves' party, including Moash, Febrth, and Fia, was lost for a time in the Frostlands. While attempting to determine where they were, they were ambushed by a party of four Fused. Graves was stabbed in the chest by one of them, and his Shardblade materialized next to him, signaling that he was truly dead. Febrth and Fia were also killed, while Moash was taken prisoner after killing Leshwi.[1]

This page is complete!
This page contains all the knowledge we have on the subject at this time.
Jofwu (talk) 19:14, 16 September 2018 (MST)
Retrieved from "https://coppermind.net/wiki/Graves?&oldid=150079"
Categories: