The Oathpact is an agreement sworn by the Heralds of The Almighty that trapped the Fused on Braize in between Desolations.[1]

During the Desolations, Odium had given his soldiers powers, allowing them to remain past their deaths as Cognitive Shadows. After being killed, these singers, known as the Fused, were able to take over the bodies of other singers and manipulate the Surges with Voidlight. Every time a Fused was killed, the soul would simply be born again into a new host. This made an impossible challenge for the humans as their strongest enemies could never be permanently killed, and so the Oathpact was created to solve this problem.

Five men and five women gave themselves up voluntarily to this pact, who would become known as the ten Heralds. With Honor's blessing, they traveled to Braize and sealed the spren of the enemy there. It prevented the Fused from returning, and so ended the war. But the Fused tortured the Heralds on Braize until one of the Heralds broke. Thus the Heralds and the Fused would return, starting a new Desolation. At the beginning, the Heralds held strong and hundreds of years passed between Desolations.[2] Around 2500 years later,[2][3] the Heralds started to lose their sanity, and there was less than a year between the last two Desolations, which left humans no time to rebuild society.[2] To solve this problem, nine Heralds found a way to abandon the Oathpact and left Talenel, who has never broken, to uphold it by himself.[1] The Heralds as well as the Stormfather thought that this would end the Oathpact entirely, at least for the Heralds abandoning it. However, despite what they believe, all the Heralds are still bound to the Oathpact,[4] although it has been weakened to the point of near-destruction.[2] For over four and a half millennia, Talenel withstood the torture of the enemy alone, but eventually he was returned to Roshar. Although Talenel did not break, it is currently unknown what caused his return.[5] This coincided with the True Desolation, currently occurring on Roshar.[2]

With the Oathpact weakened and the Everstorm present on Roshar, the Fused only returned to Braize briefly and were reborn in the next Everstorm.[6] The potential restoration of the Oathpact was a subject of some discussion among the modern day Radiants seeking to defeat the Fused. Jasnah Kholin considered trying to locate a Herald to ask them to return to Damnation or kill them to seal away the Fused again.[7] The Oathpact was later destroyed completely with the true death of Jezrien, although a "ghost" of it remains.[8] Dalinar approached Ishar who in a moment of lucidity claimed the Oathpact could be reset, although he said that he will need Dalinar's help to complete the task.[9] 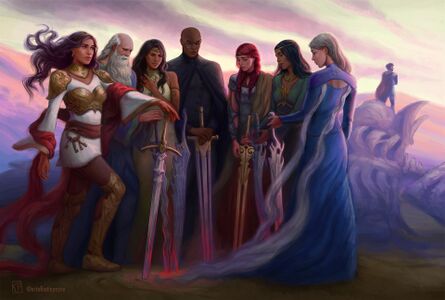 by Katie Payne
End of the Oathpact

The Oathpact can be visualized by a Bondsmith as a network of Connections between each individual Herald and their fellows.[10] Dalinar saw the Oathpact and noted a particularly strong, still potent connection when he touched Nale with Bondsmith powers.

While the Oathpact still remains,[13] how much is unknown. Ishar implied that there is a way to reset the Oathpact when he shortly regained sanity. He instructed Dalinar to meet him in Shinovar and let a Radiant swear an Ideal near him to proceed. Even after the Oathpact was abandoned by nine of the Heralds, the Connection that remained between them still allowed each Herald to sense the others to some extent.[14] This allowed all the Heralds to sense when Jezrien was permanantly killed by Moash, which manifest a terrible ripping sensation internally, leaving behind a sensation of an empty place or loss inside themselves.[15] However, the Oathpact still remained intact even though one of its members was in the Beyond, with only Jezrien's Connection to the others being completely severed.[10]

This article is still missing information. Please help The Coppermind by expanding it.
Retrieved from "https://coppermind.net/wiki/Oathpact?&oldid=161969"
Categories: