“The facts align. The truth that has always been, will now soon manifest to all. ”

Ivory is an inkspren[2] on Roshar. He most often takes the form of a small man with jet black coloring.[3][4] Ivory formed the Nahel bond with Jasnah Kholin, granting her the ability to use the Surges associated with the Order of Elsecallers. 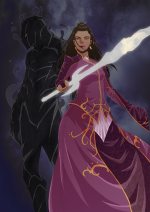 by ToastSamurai
With Jasnah as spren and as a Shardblade
For more images, see /Gallery.

“Ivory, you think all humans are unstable. ”

In the Physical Realm, Ivory takes the shape of a well-dressed man. He wears a stiff, formal suit with a long coat.[4][3] His features are extremely sharp and too angular to be human, with eyes that have no pupils. Both his clothing and features are inky-black with a prismatic sheen, like marble covered in oil. Ivory has a noble bearing, with stiff, commanding posture and a clipped voice. He is able to change his size but not his shape, except when manifesting as a Shardblade.[4]

As a Shardblade, Ivory is long and thin.[5] In the Cognitive Realm, he carries a sword of his own.[6]

Ivory holds Jasnah in very high regard, saluting her during their first interaction in the Cognitive Realm[6] and admiring her logical nature.[4] Although he is very devoted to her, offering her counsel and spying on people for her,[7] he grows anxious if she talks about him to other people and does not like appearing in front of others.[3] He is straightforward, both in speech and in gestures. Ivory has a rebellious streak, as evidenced in his bonding Jasnah against the other inksprens' wishes, and taking the contradictory name of Ivory as a symbol of defiance.[4]

Ivory is an inkspren; when in Physical Realm, he can drastically change his size, from as small as a speck of dust to as large as an adult human.[4] When travelling with Jasnah, he will typically maintain a small form and ride on the collar of her dress.[1] This size-shifting ability allows him to move around unseen and eavesdrop on other people.[7] He is familiar with other types of Radiant spren, though his knowledge appears to be to some extent influenced by stereotypes.[4] When in Shadesmar, he carries around a sword, though it's unknown whether this is customary or if he's a fighter of any skill.[6]

Ivory grants Jasnah access to the Surges of Transformation and Transportation, which allow her to Soulcast,[8] as well as to travel to and from the Cognitive Realm.[5] She is far along enough in her Immortal Words that he is also able to manifest as a Shardblade.[1]

Ivory and his generation had been the spren equivalent of children at the time of the Recreance.[4]

Ivory appeared to Jasnah Kholin on the night of Gavilar Kholin’s assassination. When she was walking down a deserted hallway of the palace, figures began to form from the distant shadows, one of which took the shape of a man. This man, Ivory, strode toward her, unsheathing his sword, but hesitated when Jasnah stood her ground. Jasnah then transferred from the Physical Realm into Shadesmar without realizing what she was doing, falling backwards into the sea of beads. Ivory hovered over her, satisfied, and sheathed his sword. However, Jasnah managed to create the palace hallway they had been in out of the beads using the Surge of Transformation, and was able to rise out of the sea. Ivory stepped onto the platform she created, unsheathing his sword, but hesitated again when Jasnah used the beads to create the statue of Talenel’Elin from the palace, making it move its sword. She then stood. Ivory watched her, then raised two fingers to his forehead and bowed in respect. The figures behind him turned to each other, whispering, before Ivory and Shadesmar both faded and Jasnah returned to the Physical Realm.[6] 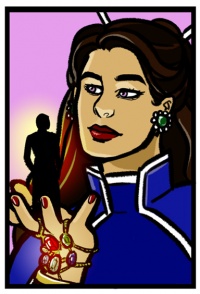 by Sheep
Standing on Jasnah's hand

“He does not like me to speak of him. It makes him anxious. ”

Shallan accidentally saw Jasnah and Ivory outside the door of her cabin on the Wind's Pleasure. He appeared as a small man in Jasnah’s left palm, and melted into shadow as soon as he was seen. Jasnah then told Shallan he didn't like when she spoke of him as it caused him anxiety. She suspected the Recreance killed many spren, and that the other inkspren saw Ivory bonding Jasnah as a betrayal, although he refused to speak on either topic.[3]

When the ship was attacked by the Ghostbloods in an attempt to kill Jasnah, she was badly wounded. Ivory helped her move from the Physical Realm to the Cognitive Realm, saving her life.[9]

When Ivory and Jasnah Elsecalled back into the Physical Realm, Wit was waiting for them. Jasnah summoned Ivory as a Shardblade, though she dismissed him upon realising it posed no threat to Wit. They travelled with him at least to the nearest town.[5]

“He stirs. He angers. We are naught before him, Jasnah. He would destroy my kind and yours. ”

Soon after Ivory and Jasnah arrived at Urithiru, they read the recorded words of the madman from Dalinar’s warcamp, whom they suspected was a Herald. Ivory confirmed the speaker was Talenel, going on to suggest they search for him in Shadesmar as it would be easier to find him there. They discussed the time they had lost, and Odium’s intention to kill both spren and humans. Jasnah and Ivory then talked about Shallan, as well as contemplated the idea of insanity, bringing up the spren who went mad following the Recreance as well as the Heralds. They returned to discussing Shallan, as well as Pattern, both of whom Ivory found to be troubling. They also talked about the Knights Radiant, and finally deliberated over whether knowledge they had learned from Wit should be shared with others.[4]

Some days later, Ivory spied on the Stormwardens for Jasnah in the library under Urithiru after she realized they were discussing Renarin.[7] 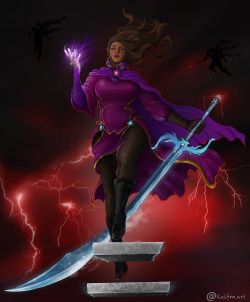 “Jasnah, this is right. Somehow it is. It is not what makes sense, yet it is still right. How. How is this thing? ”

During the Battle of Thaylen Field, Ivory rode on the collar of Jasnah's dress as they entered the Temple of Pailiah'Elin seeking Renarin. There, they found their suspicions confirmed upon seeing that Glys, Renarin's spren, had been corrupted by Odium. Jasnah, intent on killing Renarin, summoned Ivory as a Shardblade.[1]

However, Jasnah changed her mind and dismissed Ivory. Confused, he reappeared in the form of a man at her collar, stepping away and changing to full-size as Jasnah fell to her knees and embraced Renarin. Ivory was surprised that he found not killing Renarin to be the right decision, despite it not being what made sense.[10]

After Dalinar summoned Honor's Perpendicularity, Jasnah and Renarin made their way through the Low Wards following the gloryspren to him. When a group of Amaram's soldiers intercepted them, Jasnah summoned Ivory as a Shardblade and used him along with the Surge of Transformation to kill their assailants, then caused a blockade to keep back other soldiers.

After reaching Dalinar, Jasnah was charged with guarding the hole in the city wall from enemy troops. She and Ivory carried out Dalinar's orders successfully, not needing assistance when Adolin went to check on them.

While defending the wall, they discussed the effects of summoning the Perpendicularity. Due to how close the three realms were, they were able to see into the Cognitive Realm, and Jasnah was able to Soulcast with remarkable ease. Deciding to make the most of, she Soulcasted the very air, filling the gap in the wall with bronze that melded perfectly into the stonework.

When Ivory and Jasnah saw Shallan Lightweaving, he warned her that the rate at which she was using Stormlight was dangerous.[11]

This article is still missing information. Please help The Coppermind by expanding it.
Retrieved from "https://coppermind.net/wiki/Ivory?&oldid=152971"
Categories: