The Order of Elsecallers is an order of the Knights Radiant on Roshar.[2]

The Elsecallers were Surgebinders who used the Surges of Transformation and Transportation,[3] and they are associated with the zircon polestone. They formed a Nahel bond with Inkspren.[4] So far, it is known that the Elsecallers had the power to Soulcast and to "Elsecall," a use of the Transportation Surge which allows physical travel between Realms.

Those who join the Elsecallers generally subscribe to a philosophy that they should be becoming better with each oath, seeking to explore their true potential and reach it.[5] The order is more open to all types of people, as long as they want to improve themselves. They tend to attract those who are less flamboyant, scholars, theologians, and those who are interested in leadership. Modern lore connects the Elsecallers with the gemstone Zircon, the number seven, the essence tallow, and the body focus oil. They are associated with the attributes of wisdom and carefulness.

The Elsecallers are one of the scholarly orders of Knights Radiant. Inkspren are attracted to people who think through decisions rather than acting on instinct. This quality is usually associated with scholars, but can also apply to a soldier who thinks things through instead of rushing into battle.[6] Before the Recreance, the order also had a fair number of theologians and leaders, and was generally considered one of the most welcoming. The Elsecallers are widely considered the wisest and most careful of the Radiants, and were some of the Radiants' best tacticians and logistical organizers.[5]

The Ideals of the Knights Radiant, also known as the Immortal Words, are a set of rules by which the Radiants live. The First Ideal is shared by all of the orders, and is used as a motto for the Knights Radiant as a whole. Each of the orders then have an additional four Ideals that are unique to that order.[7] The Ideals of the Order of Elsecallers all focus on progressing with each Ideal and discovering and reaching one's true potential. As a result, the order is more open to all types of people, as long as they want to improve themselves.[5]

The Elsecallers are one of the orders that allows a Machiavellian interpretation of the First Ideal. To them, the journey is about the entire species more than the individual.[8] 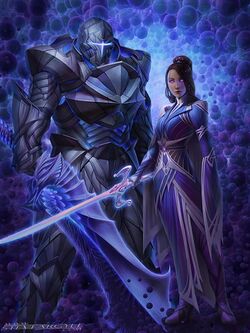 The Elsecallers use the Surges of Transformation and Transportation.

Transformation can be manipulated to change an object into one of the ten essences.[9] Soulcasting transforms one material into another, though Soulcasting into one of the Ten Essences is easiest.[10] To Soulcast, the Elsecaller shifts their perception to see into the Cognitive Realm, and communicates with the Cognitive aspect of the object they want to transform.[11] This is normally done through direct contact with an object, however, can be performed from a distance. Elsecallers are more skilled at doing this than Lightweaver.[12] Elsecallers tend to view Soulcasting differently from Lightweavers.[13]

Their Shardplate, which they get after an unknown Ideal, is made up of logicspren.[1]

“As the duly appointed keepers of the perfect gems, we of the Elsecallers have taken the burden of protecting the ruby nicknamed Honor’s Drop. Let it be recorded. ”

They were the prime liaisons with the great ones of the spren.[2] They were considered prodigiously benevolent by the author of the book Words of Radiance.[2] They were appointed as the keepers of the perfect gems and took it upon themselves to protect Honor's Drop.[20] Some Elsecallers worldhopped to other planets, which is hinted at in names of places on the map of Shadesmar.[19] The Elsecallers were one of the nine orders to betray their oaths, killing many inkspren and dropping Shardblades and Shardplate during the Recreance.

Around six years before the start of the True Desolation, likely about the same time Shallan bonded Testament, the inkspren Ivory bonded Jasnah, re-forming the Elsecallers.[21][22] Jasnah is currently the only Elsecaller, as all new-generation inkspren except Ivory are unwilling to take the risk of a bond.[4]

This article is still missing information. Please help The Coppermind by expanding it.
Retrieved from "https://coppermind.net/wiki/?title=Order_of_Elsecallers&oldid=168776"
Categories: