From The Coppermind
Jump to navigation Jump to search
This page or section needs to be updated with new information for Oathbringer!
Be aware that in its current state, it does not include this additional content yet.

The Spiritual Realm is the realm of existence in the cosmere that contains the essence or soul of things. In this Realm, the interconnection between objects, people, and ideals are made apparent.[1]

Everything in the cosmere has a Spiritual aspect, a soul, which represents the idealized form or concept upon which their existence is based.[1] Among sentient creatures, this soul is sometimes described as a Spiritweb. Several manifestations of Investiture like gold Feruchemy and Regrowth can restore a damaged object or person into the ideal form as dictated by the soul.

The bulk of a Shard's energy is stored in the Spiritual Realm, with the Selish Shards being notable exceptions.[2][3]

Time and Space in the Spiritual Realm[edit]

An object's connection to its past as well as its future can be observed from the Spiritual Realm, where the passage of time has little meaning.[4] Some beings, like Seers, Moelach, Sak the Aviar, and Shards of Adonalsium can peer into the Spiritual Realm to gain insight into the future, though some Shards are better at it than others.[5][6] It is also possible to see into the past of others via similar means.

Future sight always draws upon the Spiritual Realm to work.[11] Any time someone sees the future, it will have ripples against someone else's ability to do the same.[12] Future sight can be used to gain knowledge of where and when the user needs to be somewhere, and what they need to do.[13][14][15] This ability is not perfect, and can sometimes tell a user where they are supposed to be without the why.[14] Future sight can also alert to user of the presence of certain objects.[16] In general, it's been said to be a highly dangerous ability.[17]

Shards can perceive the future, although it can be difficult for them. Some are better at it than others, with Cultivation and Preservation in particular being noted as particularly excelling.[5][18] Shardic power can also be utilized by others to perceive the future like they do: examples of this are atium, as well as the visions of the Returned.[19]

Gold
Burning gold allows the Allomancer to see a hallucination of who the user could have been, known as a "gold shadow".[20] Touching the gold shadow while burning gold causes unpleasant side effects.[22] Each time an Allomancer burns gold, they see a different image, as it changes depending on their current situation.[23]

Malatium
Malatium works similarly to gold, albeit showing visions of other people's possible selves rather than the user's. Flaring it seems to give an Allomancer a glimpse into the Spiritual Realm, allowing them to see a vision of a past event in another person's life by seeing their Connection and their past.[24]

Atium
Burning atium allows the Allomancer to see a few seconds into the future by producing atium shadows of everything in sight, which perform future actions. It also expands their mind to be able to accept and process all of the information, even allowing them to dodge incoming attacks from behind. If another Allomancer burning atium is encountered, the atium shadows will split for both Allomancers, since each seeing into the other's future means that they can both make different decisions that affect both. The atium shadow will also split when the opponent is burning electrum. Burning duralumin with atium allows Allomancers to see the ultimate effects of their actions, allowing them to peer into the Spiritual Realm.[25] Renarin
As a result of Glys being corrupted by Sja-anat, Renarin has some ability to see visions of the future; these visions seem to appear similar to stained-glass images. This ability is imperfect, as the events it predicts can fail to occur.[26][27]

Regal Forms of Power
By staying out in the Everstorm, singers are capable of bonding with a voidspren, changing their form, which alters their physical appearance and mental capabilities.[28][29] One Regal form of power is nightform, which allows the user to predict the future.[30]

Moelach
Moelach is the source of the Death Rattles, visions of the future experienced by some people on Roshar during the final moments of their lives.[31][32] Those experiencing the visions will often speak aloud in their final moments to communicate what they are seeing in the form of cryptic utterances.[33][34]

Other forms of future sight[edit] 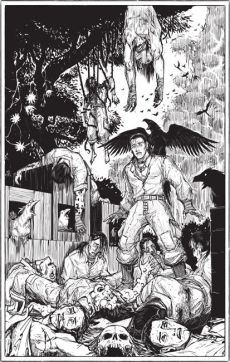 Riino
Riino has an ability to predict the future, assisted by some sort of shining globe. Whatever the globe is, it isn't a fabrial, as it doesn't feature a gemstone. While Riino himself mentions that utilizing it requires specific training, the globe can grant visions to the uninitiated. It requires that its surroundings be highly Invested, which is why Riino uses it only during a highstorm.[35]

Returned
Occasionally, when a person dies, Endowment grants them a glimpse into the Spiritual Realm, letting them see a possible future. She then offers a chance to Return and change the events of the vision.[36][37][38]

Wulfden
Wulfden the Fourth uses some form of magical foresight.[39] The source and extent of his powers are unknown, though it appears to be related to Dominion.[40] The mechanics of his ability are unknown, but parallel to similar skills in the cosmere.[19]

Aviar
One type of Aviar allows a person it's bonded with to see visions showing their possible deaths in near future (roughly a minute). These visions manifest in the form of an image of the individual's corpse in the area where a death could happen. The Aviar has control over when they share this ability, and with whom, and can see every vision it shares.[41]

Hoid
Hoid has access to an ability that allows him to make use of the Spiritual attribute of Fortune,[14], which grants him a limited amount of foresight.[13] Hoid's Fortune ability lets him know where and when he needs to be.[13] While this ability may grant him knowledge of what he is to do,[14][15] usually Hoid does not know why his ability has brought him to a specific place.[14] Hoid's Fortune ability is not infallible; occasionally it directs him to go somewhere, but either nothing notable is happening or he is unable to discover the reason why he has been led there.[42]

A person's Spiritweb can be damaged either through physical or emotional trauma. This creates "cracks" in the soul. It is easier for Shards to Invest in people who are damaged in this way, as Investiture can enter the soul through these "cracks". This is why Allomancers need to undergo Snapping in order to awaken their powers, and is implied to be the reason why Surgebinders tend to have psychological problems.[43]

This article is still missing information. Please help The Coppermind by expanding it.
Retrieved from "https://coppermind.net/wiki/?title=Spiritual_Realm&oldid=119146"
Categories: