“I find the questions fascinating. What you wonder tells me so much. ”

Mistspren are a subset of spren that exist on Roshar. They are capable of forming a Nahel bond, granting people the abilities of the Order of Truthwatchers.[2] They are closer to Cultivation than to Honor.[3] 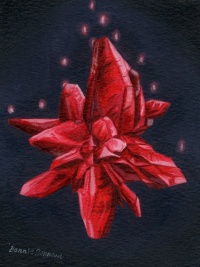 “We usually choose a shape like a person, but we don't need to. ”

In the Physical Realm, mistspren resemble the shimmer light makes on a surface when it is reflected through a crystal.[4] When they stay still, light grows upwards from them in the shape of plants, which retreat when they start moving.[5]

When Enlightened by Sja-anat, they take on a different form -- that of a red crystal dripping light upward.[6]

In the Cognitive Realm, mistspren have bodies made out of fog, and a porcelain mask on their face.[7] Their clothes are not part of their essence, but interact with their body as though it was solid.[8] Their masks twinkle when they catch the light, and almost appear to be made of translucent crystal.[7] The mask's expression does not change, and the lips do not move when the mistspren speaks. Though they generally are humanoid, mistspren are capable of taking on other forms, unlike most sapient spren.[2] Mistspren voices seem to have a tinkling or chiming quality.[5][2]

It is unknown how a corrupted Mistspren would appear in the Cognitive Realm.

In the Cognitive Realm, mistspren can change their form into non-humanoid shapes.[1] It's unknown how much control over their form they have in the Physical, although the corrupted spren, at least, can hide themselves inside the bodies of their bonded Surgebinder.[9] They can also enter the gemhearts of various creatures; in case of cremlings, this gives them some ability to control their direction.[10]

They can form a Nahel bond to make a person a Truthwatcher, in exchange for retaining their sapience in the Physical Realm. Ordinarily, they grant their partner the abilities of Progression and Illumination, allowing for healing and creating illusions. In a bond altered by Sja-anat, the Progression surge is retained, while Illumination isn't fully functional.[11] However, Enlightened mistspren grant their partner the ability to see visions of the future. In a more advanced bond, the mistspren can also record the vision and re-view it later.[12] 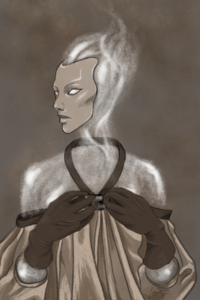 Mistspren in general are curious; the idea of seeing something through a new perspective, or finding out how other creatures think, seems interesting to them.[1][13] Perhaps for this reason, they are the most willing to be Enlightened by Sja-anat, and many go to her willingly to be transformed.[14][12] They seem highly empathetic and supportive of their Radiants.[10][15] They aren't opposed to bonding singers, though it's unknown how prevalent this attitude is among them.[10]

In the Cognitive Realm, many mistspren work aboard honorspren ships as regular crewmembers. They are noted as doing all the work aboard the ships, but do not seem to be particularly despondent about it.[8] Despite being able to assume many different shapes, they generally prefer using a humanoid one.[1] There seems to be two prevalent naming schemes among them - descriptive, like Dreaming-though-Awake, and seemingly meaningless, like Glys and Tumi. It's unclear if this is because Dreaming-though-Awake comes from a different culture than the others, or if the latter two took on new names upon being Enlightened.

This article is still missing information. Please help The Coppermind by expanding it.
Retrieved from "https://coppermind.net/wiki/Mistspren?&oldid=160233"
Categories: