Wan ShaiLu, known as Shai is a MaiPon woman from Sel. She has a reputation throughout the Rose Empire as being one of the best Forgers alive.[3] As of the events of The Lost Metal, Shai cannot go home to Sel.[4] 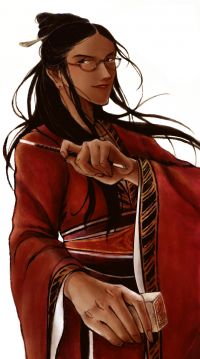 Shai is small of stature like the rest of MaiPon people. She has black hair that lays straight and long.[5][6] She wears spectacles because of her bad eyesight.[5] She is implied to have epicanthic folds, and has prominent cheekbones.[6] Her arms are layered with shallow cuts from the Bloodsealer Weedfingers, who needs her blood to keep her imprisoned.[7]

Her voice is on the deeper end for a woman.[6]

She loves the thrill, the accomplishment and the wonder of Forgery. However, at times, she is tempted by a simple life where she doesn't have to hide or lie.[8] She constantly quotes her Uncle Won and Aunt Sol although they don't really exist. They are figments of her imagination created for one of her Essence Marks.[8] She believes her Forgeries are works of art and she gets angry when contradicted on that.[9]

She worships the Unknown God.[5]

She holds a deep hatred for Autonomy, and by extension Bavadin, due to her ideals and actions. This hatred is enough that it can sometimes cloud her judgement.[6]

As an Elantrian, she has a very high opinion of herself, seeing herself as a divinity worthy of praise and offerings.[10]

She has the glowing skin of an Elantrian, and has her hair up in a bun.[10]

Shai is a very talented artist,[3] but generally uses her ability to make forgeries of paintings. She reads people very well and is a master manipulator.[11] She has good control of her emotions. She is very knowledgeable in art history and has a very good understanding of Realmatic Theory.[12]

During her time on Sel, Shai has five Essence Marks which took her over eight years to create.[8] As of her time on Scadrial, she has created at least one more.[10] 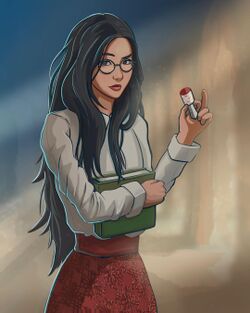 Shaizan
Shaizan, translated Shai of the Fist,[8] is an extremely skilled warrior who spent the last fifteen years among the Teullu people, who adopted and trained her in their martial arts. They also gave her the name Shaizan. Gaining access to Teullu training was very difficult. Shaizan was nearly killed a dozen times while training. She has a lean, hard body, short hair, and a scar that stretches from her nose down around her right cheek. Unlike Shai, she doesn't need spectacles. She doesn't know how to create soulstamps and doesn't have scholarly inclinations. She also doesn't have the patience for witticisms or gibes. She is a creature of instinct and thrives on a challenge. It took Shai two years to create this Essence Mark.[1]

The Scholar
Using this Essence Mark, she can speak a dozen languages, from Fen to Mulla'dil and a few from Opelon as well. She knows dozens of cultures and how to move in them. She knows science, mathematics, and many major political factions of the world.[8]

The Beggar
Using this Essence Mark, she knows the ways of the streets and how to survive in a city's underworld. She is an incomparable lockpick and has years of experience as a contortionist. She is emaciated, with lost hair and scarred skin.[8] Shai finds thinking like a beggar uncomfortable.[13]

The Survivalist
This Essence Mark gives her keen skills as a woodsman and a hunter as well as many others useful for surviving in the wilderness.[8]

The Way Out
She knows cooking, farmwork, and sewing. She visited a resealer and was given a remedy, which is actually the soulstamp for this Essence Mark, for an illness. She believes she will die unless she applies the soulstamp every morning. Her Aunt Sol and Uncle Won will send her letters, hundreds of which Shai already wrote and will give to a delivery service before using the soulstamp. She is afraid of traveling, thinking a trip to visit her relatives is too dangerous. Unlike Shai's other Essence Marks, this one doesn't know she is a Forger. She is Shai's way out to a simpler life. The Mark rewrites her years as a Forger and removes all knowledge of Forgery from her mind.[8] Later, Shai promises to add Gaotona as "a kindly grandfather... who I respected very much" to the Essence Mark.[1]

Elantrian
This Essence Mark changes her past so her parents moved to Arelon before she was born, making her an Elantrian. She refers to herself as Shai (pronounced as in Aonic), blessed of the Shaod. She regards this Essence Mark as dangerous, as it could become permanent.[10][14]

Shai carries two soulstamps that are designed to work on any object for a limited time. One creates a doorway, and the other repairs broken objects.[15]

Shai first started inquiring about being a Forger when she was eight years old.[8]

Han ShuXen, an old painter who had tutored Shai as a child, asked her to destroy his masterpiece Lily of the Spring Pond. ShuXen hated the Rose Empire and didn't want his painting, which he had painted for a woman he once loved, in their hands. He helped Shai create a counterfeit.[8]

Shai managed to destroy the original painting in the Arbiter Frava's office near the Imperial Gallery, replaced it with a fake and planted another lower-quality counterfeit in her room in order to hide the theft.[16] With the help of the Imperial Fool, she also broke into the Rose Palace's Imperial Gallery by impersonating a noblewoman to steal the Moon Scepter. However the Fool betrayed her. He stole Shai's copy of the Moon Scepter, swapped it for the original, then escaped after giving Shai up to the palace guards. Shai was captured and charged with public execution for theft.[5] 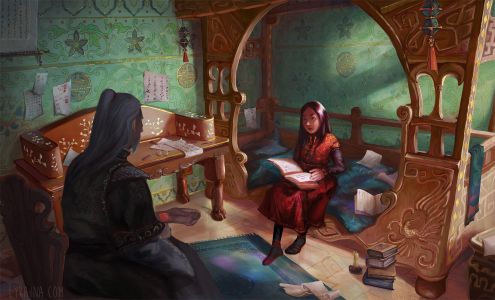 A day before her execution, she is asked by the council of five arbiters to Forge a soul in exchange for her freedom. Shai doesn't think it is possible to create a soulstamp for an entire person's soul in the hundred days they give her at first, but accepts their offer in the hope that it will give her time to escape. She is taken before the Emperor Ashravan and told that he took a crossbow bolt in the head from the assassins sent by the Glory Faction and despite surgeons resealing the wound, he is in a vegetative state. She is told to replace the emperor's soul with a Forgery.[5]

She is given a room barely better than a cell which, over time, she transforms into the finest room in the whole palace with Forgery.[8] She receives her Forgery tools except for her Essence Marks. Gaotona volunteers to being her test subject for the soulstamps she creates for Emperor Ashravan.[16] The arbiters hire a Bloodsealer to make sure of her cooperation.[9] As they work together, Gaotona and Shai grow fond of each other and eventually become friends. Shai starts to collect information on Ashravan's personality and memory to use for the soulstamp.[7]

Shai concluded that the arbiters were planning to kill her, even if she fulfills their agreement, a little while before the soulstamp is done and have another Forger finish her work. She started lacing her notes with subtext about the arduousness of the task to deter the other Forger.[17] All the arbiters except Gaotona proposed that she create a backdoor to the emperor's soul that would allow him to be controlled by the arbiters. Shai played along but eventually refrained from doing it, even for herself.[18]

As her hundred days pass, Shai was constantly tempted to escape but was driven by the challenge of the task.[8] On day ninety-seven, just before she finishes the soulstamp, she enacts her plan to get past the Bloodsealer. The next day, Captain Zu tries to kill her, a move she had expected from some of the guards and managed to evade by Forging traps into her room. She escaped and made her way to Ashravan's chambers, desperate to see if she had managed to Forge a soul from nothing. When it succeeds, Gaotona gave her back her Essence Marks and she used them to escape the palace.[1] It later turns out that she didn't reForge Ashravan's soul exactly the way it was and made small changes, nudging him on the path to being a better ruler.[13]

After she escapes, Shai plans to track down the Imperial Fool who betrayed her,[13] a task she eventually succeeds at.[6][19]

At some point after her release from the Rose Empire, she became a member of the Ghostbloods and worked on Scadrial in order to resist the oncoming threat of Trell, working under the codename of Moonlight.

Six years after the first interaction between the Elendel Basin and the Southern Scadrians, she found Marasi Colms in a series of underground caverns, crashing a Set smuggling operation. She secretly gave her a letter, informing her that the Ghostbloods are watching her, and are impressed by her accomplishments.[20]

Several days later, she met with Marasi, acting as her driver for a sting operation on the Set smuggling operation in Bilming. Introducing herself as a member of the Ghostbloods using the code name Moonlight, she explained to Marasi the nature of Trell and Autonomy.[6]

She was forced to use a Stamp to change her past and turn herself into an Elantrian, also changing her personality and giving her the abilities of an Elantrian. She used AonDor in order to create an illusion of Marasi, letting her escape.[10] Following this, she vanished and the Ghostbloods sent out a mission to look for her.[21]

She holds a deep hatred for Bavadin, fundamentally disagreeing with her ideals and actions.[6] They have met before at an unknown point.[22]

Kelsier is her mentor, and she holds a deep respect for him.[expand]

She has a great interest in Marasi, and was the one who brought her into the Ghostblood's fold.[6]

Gaotona held a strong dislike for Shai, seeing her forgery as an abomination, and felt that she was wasting her immense talent.[16] But over time, she managed to change his view on art, and make him grow a fondness for her, making him wish to save her from execution, even if he didn't feel as if he was on her side.[expand]

She despises Hoid for deceiving her and running away with the Moon Scepter, replacing it with her forgery.[5] After escaping from the Rose Empire, she began to hunt after him to enact her revenge, an act that she eventually succeeded at.[6][19] Their current relationship is unclear, but she does wonder to herself if she was keeping watch over him, or he over her, but she knows that they are in reality just keeping watch over the same third parties.[6]

She works with Kaise in Bilming.[23][expand]

This article is still missing information. Please help The Coppermind by expanding it.
Retrieved from "https://coppermind.net/wiki/?title=Wan_ShaiLu&oldid=171142"
Categories: