“They dress in painted sequins. They drink wine. They laugh, and smile, and play, and dance, and eat, and quietly kill. All part of Harmony's plan. All actors on a stage. That's what you are too, Waxillium Ladrian. It's what all men are. ”

—Bleeder speaking in Wax's head for the first time.[2]

Paalm was a female kandra of the Third Generation. She was an agent of Harmony sent to protect Waxillium Ladrian in the Roughs, under the guise of a human woman, Lessie.[1]

Sometime after Lessie's supposed death, she chose to remove one of her Hemalurgic spikes. She used only a single spike at a time to avoid being under Harmony's influence.[3] She used spikes of a metal unknown even to Harmony to grant herself Allomantic and Feruchemical powers.[4] During that time she went by the alias Bleeder.[3] She colluded with the Set to execute a plot to free Elendel from Harmony's influence.

She ultimately committed suicide to avoid being taken control of by Harmony after she was shot by Wax with a second Hemalurgic spike.[1]

As a Kandra of the Third Generation, Paalm excels at creating bodies. Her considerable expertise comes from her history of service to the Lord Ruler, and the time she spent crushing entire kingdoms and rebellions for him. She also knows a great deal about Hemalurgy, having learned how to grant herself Allomantic and Feruchemical abilities with spikes of Trellium.[5][6] She is proficient at using her stolen abilities though seems to prefer Feruchemical steel. She knows how to create at least one new kind of Hemalurgic construct using only a single spike in the creation. She is able to hide herself from Harmony's sight by spiking herself with a Trellium spike.[3][7][8][9][4]

As per the agreement between the Kandra and the Lord Ruler Paalm was to serve him directly. While under his control she was almost constantly sent on missions and was used to stop rebellions and topple kingdoms, some other Kandra even speculated that she had pretended to be an Inquisitor at one stage. Due to her work she did not often visit the homeland and it was suggested that she became familiar with the workings of Hemalurgy. Her loyalty lasted until the Final Ascension where it then switched to Harmony, again to the point of fanaticism.[7]

While grooming Wax to become his sword, Harmony decided that he required a bodyguard. Paalm showed herself to be enthusiastic for the role and Harmony agreed to send her, thinking that the pair would help each other greatly out in the Roughs.[1]

Wax first encountered Paalm, disguised as 'Lessie' at The Weeping Bull, where she was disguised as a dancer. Wax formally met her during their second encounter while hunting Granite Joe. She claimed to be hunting him as well but was actually in Granite Joe's employ. Lessie seemingly had a change of heart when Wax told her that he still thought her legs were pretty, and she shot Granite Joe in the neck with her crossbow, killing him.[10] After this time, Lessie became a law-woman alongside Wax and Wayne. Originally the role was meant to have no romantic nature to it but Paalm suggested to add that element to their relationship with Harmony agreeing.[1] The two eventually married with a simple Pathian ceremony, while being chased by a mob on horseback.[11]

When the time approached for Wax to move back to Elendel Paalm resisted the move deciding that Wax was too happy in the Roughs to move, even with the idea that she could acommpany him to Elendel.[12][13] While hunting Bloody Tan in his lair in the town of Feltrel, 'Lessie' and Wax split up. At some point, she was taken hostage. Wax attempted to shoot Bloody Tan, who was using 'Lessie' as a human shield, but he pulled her into the path of Wax's bullet, making her take the shot to the head and seemingly killing her.[14] As part of Harmony's plan, Wax moved back to Elendel, and Paalm's time as Lessie was over. Some time afterward, she went on a murderous rampage and broke free of Harmony's influence, disobeying her contract with him.[1][3][7] 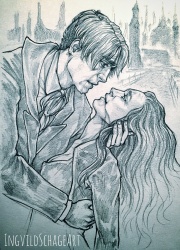 Paalm took the name Bleeder and set about a plan to free the people of Elendel from Harmony's influence.[15] At some point, she allied with the Set to achieve her goals[16] and learned how to steal abilities with Trellium.[5][6] She killed Idashwy with a spike to steal her Feruchemical power[17][18][16] and killed Governor Replar Innate and then impersonated them.[19] She also impersonated a man named Johnst who blew up a dam, causing food shortages and economic instability.[20]

Using her newly acquired power and appearance, Bleeder disrupted Winsting Innate's auction for his Senate vote, firing several shots at the guests to get them to begin attacking one another. She then entered Winsting's saferoom ahead of him; murdering him inside and cutting out his tongue in a symbolic gesture, removing Harmony's voice. As she left, she killed his bodyguards outside the saferoom.[10][17][21][22][23]

Around the same time, she impersonated Larskpur and killed Father Bin inside a church by driving spikes into his eyes—another symbolic gesture, removing Harmony's eyes[23]—to turn the Survivorists against the Pathians. When the people grew aggressive, she exposed the Kandra who attempted to calm the violence and pushed harder for violent rebellion against Innate. Exposing the Kandra was symbolic for deafening Harmony, as they were his ears.[24]

When Wax confronted her, she attempted to flee by use of a spike granting herself Allomantic steel. Wax gave chase, stopping her at the Eastbridge. In that confrontation, Bleeder attempted to convince him that she was Lessie, finally succeeding when he shot her with his Pathian earring, reforged as a bullet. Before Harmony could fully take control of her, she committed suicide.[23][25][12] After death, she asked Harmony to look after Wax.[26]

This article is still missing information. Please help The Coppermind by expanding it.
Retrieved from "https://coppermind.net/wiki/Paalm?&oldid=170295"
Categories: