“Allomancy, obviously, is of Preservation. The rational mind will see this. For, in the case of Allomancy, net power is gained. It is provided by an external source--Preservation's own body. ” 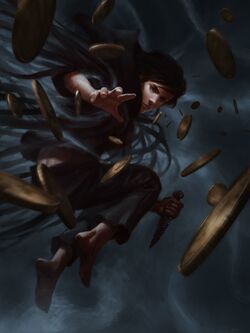 Allomantic metals are the focus, but not the source, of Allomancy's power.[7] When an Allomancer burns a metal, that metal's specific molecular structure acts as a conduit to Preservation, and then the Allomancer is granted an ability corresponding to the metal, allowing the metal to "focus" Preservation's power to the user. Each metal is the only way a mortal can access Preservation and the power of creation,[8] after which it is vaporized.[9] However, this is only true for the base sixteen Allomantic metals and not God Metals or their alloys.

Allomancers can suffer side-effects from leaving metal in their bodies for too long, and they normally burn their remaining ingested metals before sleeping to avoid this.[13] Despite this, due to their physiology, Allomancers are generally immune to metal poisoning.[14]

Advanced Allomancy can be combined with Feruchemy to gain faster-than-light travel.[15] It is possible to use Allomancy in the Cognitive Realm.[16]

Burning metals containing BioChromatic Breath has no effect on the Allomancy, although if the Breath belongs to the Allomancer it will be regained.[17] If an Allomancer burns an Invested metal which is Allomantically inert, it will not have any special effect apart from possibly killing the Allomancer.[18]

Allomancy is a spiritually hereditary trait, that does not follow the same principles of dominant and recessive physical genetics.[19] Scadrians with mixed skaa-noble heritage generally must have a noble in the previous five generations in order to be born an Allomancer.[20] The ability lays dormant until an Allomancer undergoes Snapping, which will activate their Allomantic abilities. The abilities can be used instinctually, including while unconscious,[21] once awakened if the user is to ingest the correct type of metal, though training is required to use these powers well. Snapping does not affect the chances of having an Allomancer child.[22] Twins are more likely to have the same metal, especially if they are identical instead of fraternal.[23]

Additionally, consuming a bead of lerasium will hardcode Allomancy into a person's Spiritweb and grant them Allomantic abilities. The size of the bead that is consumed is proportional to the strength of their Allomancy.[25]

In the Final Empire era of Scadrial, Snapping required immense trauma that was usually inflicted by an intense beating at a young age. It was possible for Allomancers to Snap from intense positive emotion, but this is much less common.[26] It is also possible to Snap from false emotions, caused by Soothing and Rioting.[27] It was said that the more powerful the Allomancer, the more intense the trauma had to be to Snap.[28] After the Final Ascension, Harmony changed the way Snapping operated, but it is unknown how it was altered.[29] After an Allomancer has Snapped, they will have access to their full power, and do not have to build to reach their full potential such as with Surgebinding.

Allomancers who flare their metal intensely for extended periods of time may be physiologically altered by the constant influx of Allomantic power. These people are known as Allomantic savants.[30] These people experience heightened ability with, and heightened dependence upon, whatever metal they are burning in such a manner. Under most circumstances, this was considered irreversibly damaging.

Allomancers are categorized based on if they can burn a single metal, Misting, or if they can burn all metals, Mistborn, with Hemalurgy being the only known way to access a combination powers that falls outside of this categorizations structure. Each type of Misting was given a particular name depending on their ability, such as Lurcher, Coinshot, or Soother. An Allomancer's lineage does not usually play a factor in which kind of Misting they are.[31]

Throughout the ages, the strength of an Allomancer has slowly decreased, weakening a bit with each generation.[32][33] This dilution of power eventually caps and cannot decrease any further, and has reached that point by Era 3.[34] People who use lerasium can gain the strength of ancient, powerful Allomancers.[25]

After the Final Empire, Terris and those of noble descent began to interbreed, so it became possible for their descendants to have one Allomantic ability and one Feruchemical ability. People with such powers were called Twinborn. Like Mistings, Twinborn were each given a name depending on their specific combination of abilities.[35] The interaction between the two abilities creates a new, secondary effect, known as a Resonance.[36]

A Compounder is a special type of Twinborn--a person who uses the same metal for both their Allomantic and Feruchemical abilities. A Compounder can Allomantically burn their Feruchemically charged metalmind, gaining a massive burst of the stored Feruchemical attribute. Compounders were considered immensely powerful. Though the term "Compounding" first appeared in Scadrian vocabulary after the Final Empire, perhaps the most famous Compounder was the Lord Ruler himself--by constantly Compounding atium, pewter, and gold, he was eternally young, supernaturally strong, and basically unkillable. 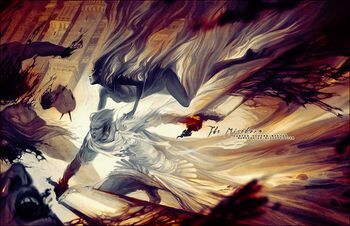 There are sixteen basic Allomantic metals. The metals come in pairs: one metal is a periodic element, while the other is the alloy of that base metal. These pairs have complementary effects. Iron Pulls on nearby metals, while its alloy, steel, Pushes on metals. Similarly, each elemental metal is classified as a "Pulling" ability, whereas each alloy is classified as a "Pushing" ability.[37] The purity of the metal corresponds to its effectiveness and alloys require precise compound percentages for maximum power. Burning an impure alloy may cause sickness,[11] while metals that are not Allomantically viable cannot be burned after being ingested.[38]

The Allomantic effects of metals are most similar to the effects of fabrials on Roshar.

God Metals do not fit in the modern Allomantic Table, and Scadrians appear to only know of the metals that correspond to the Scadrian Shards; lerasium, atium, and ettmetal, the last of which could only be burned theoretically, as it explodes upon contact with liquids.[39][40] Unlike the standard Allomantic metals, which are regular metal elements and compounds, God Metals are a condensed, solid form of pure Investiture. Alloys of God Metals can lead to additional abilities.[2]

At some point, Preservation altered Allomancy to insert Ruin's God Metal, atium, instead of one of the other metals[41][42] in order to execute his plan to defeat Ruin using atium Mistings.[43] The Shard's plan eventually came to fruition during the Battle of Hathsin when Elend's army consumed a large proportion of the existing atium, preventing Ruin from accessing his full power.

Prior to the Ascension of the Lord Ruler, Allomancy was rarely found among the general population. The Lord Ruler's Ascension, and his subsequent distribution of the lerasium beads, increased the strength of the Allomantic spiritual DNA in the Final Empire, which had long lasting effects through the subsequent generations. Rashek, and his Steel Ministry, also suppressed knowledge of several of the Allomantic metals, so that only the four physical, four mental, gold, and atium, were known of by the general populace. Malatium became known through legend as The Eleventh Metal, a rumor that may have been started by Ruin to help facilitate the downfall of the Lord Ruler. Prior to its destruction, atium and malatium were incorrectly classified as temporal metals instead of God Metals by The Lord Ruler and his government.

Allomancy was present in the original version of Mistborn (now known as Mistborn Prime). In that version, Allomancy only had Mistborn and no Mistings.[45] Mistborn Prime was never published, and Brandon later repurposed its good ideas into Mistborn: The Final Empire. To give this new Mistborn book a heist novel feel, Brandon added Mistings, so that he could have a team of specialists with their own unique strengths.

The metals themselves changed over time. Brandon had been misled by employees of a hobby shop in his childhood that pewter was an alloy of silver, so in the original draft of Mistborn, silver and pewter were paired, and he named silver Mistings Silvereyes. When he realized the factual error, he was forced to change it to tin and Tineye.[46] Brandon always thought Silvereye sounded much "slicker" than Tineye. And so silver just happened to not have any Allomantic effect in the final form of Allomancy.

After the original trilogy and Brandon's reveal that atium and malatium did not belong on the true Table of Allomantic Metals, Brandon chose the true external temporal metal to be cadmium, as it was particularly dangerous and hard to acquire, so it made sense that only Scadrians with the technology after the Final Ascension could discover it.[47] Brandon originally had cadmium's alloy named cerrobend, but that name happened to be trademarked, so Brandon was forced to change it to the generic word, bendalloy. The error was present on an early version of the Table of Allomantic Metals.

This article is still missing information. Please help The Coppermind by expanding it.
Retrieved from "https://coppermind.net/wiki/Allomancy?&oldid=157435"
Categories: