Coating a spike with blood can reduce the Hemalurgic decay significantly. It is unknown how much blood is necessary to make that effect happen,[17] however, the blood does not need to be fresh, nor separated from a body, with cuts of meat, large enough to contain the spike, also sufficing to reducing decay. This works by 'tricking' the spike into believing that it is buried in a body.[18] It is possible that encasing spikes in aluminum may prevent decay.[19] Even outside of blood, a spike will never completely lose its charge.[20]

It is not possible for multiple attributes to be stolen from the same person.[21] There is a maximum number of spikes a person can have before causing issues of mental or physical limitations.[22]

For some reason, Hemalurgic spikes don't cause infections.[30] 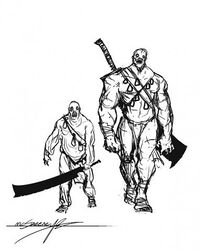 The more spikes an entity has, the more their form and body can be changed.[37] However, this isn't always the case, such as chimeras are created with a single spike.[34]

The points which can be used for Hemalurgy are known as "Bind points" and there are between 200 and 300 in the human body which can be pierced depending on the effect needed.[40] Anyone who sees into the Spiritual Realm, perhaps by burning atium, helps with placing spikes.[41]

Another important aspect of Hemalurgy is spike location. The spike must be placed in certain locations on the human body in order to steal a power or attribute, and then placed in another point on the recipient to tap into their Spiritweb. Most common attributes are stolen through the heart. If a spike is placed in the wrong location it can have unforeseen effects, such as killing the recipient, granting the wrong power, or possibly not granting any power at all.[42][43]

There are other ways to use spikes than to place them in bind points.[44]

Hemalurgy is a destructive art, that twists the body into something almost inhuman (particularly if the spike stole an attribute which is neither Allomantic nor Feruchemical). This twisting is how Inquisitors survive with spikes through their eyes and other vital places, and explains the physical deformation of the koloss.[51] In the case of the Inquisitors, it is known that their heart is in a different place and their brain is shaped around their eye-spikes. Extracting the spikes of an Inquisitor at such important places would invert the transformation, causing their death.[52] The more spikes a person has, the higher the chance that there could be issues of mental or physical limitations.[22] Additionally, any children produced by someone with a large number of Hemalurgic spikes, such as an Inquisitor, are likely to encounter complications, although they will also have a higher chance of being an Allomancer.[53]

Hemalurgy was not specifically created by Ruin but rather arose from the interactions between Preservation, Ruin, and Scadrial itself.[54] This Metallic Art has an inherent flaw: each spike creates holes in the mind, making individuals who have received spikes easier to manipulate. Through powerful emotional Allomancy, one can Push or Pull on a spiked creature's emotions so hard that they literally come under the Allomancer's control.[55][56] Indeed, the spikes in the koloss were what allowed Rashek to control them. Kandra also can be controlled in this way, but as Allomancers decreased in power, this knowledge was forgotten.[5] This damage to the soul also repulses Radiant spren.[6] The influence of Ruin and presumably emotional Allomancers can be reduced by aluminum.[57]

Damage done to a persons spiritweb by Hemalurgy will have implications for said person during the transition period between physical death and passing into the Beyond. These effects are lessened after they pass to the Beyond.[58]

Allomantic and Feruchemical abilities granted with Hemalurgy cannot be inherited.[59]

If an Allomancer attempted to burn a Hemalurgic spike, the Allomancer's spiritual DNA would be spliced to that of the person's contained in the spike. The consequences of this are as of yet unknown.[60]

Allomancers cannot burn Hemalurgic spikes that have extracted powers from others, however, would be able to burn a spike used on themselves that was going to remove their own power.[61]

An atium spike granting Allomantic atium could be briefly burned by the recipient.[62]

The same piece of metal can be Hemalurgically and Feruchemically charged at the same time.[63]

When a Feruchemical ability is stolen, the spike's recipient is able to access any metalminds created by the donor.[64] If that spike was split into two pieces and given to two different people, they would both be able to access their donor's metalminds but not those made by the other person, due to the recipients' own identities "muddying" the metalminds' keying.[64]

It is possible to steal Investiture a Forger has given someone (e.g. if a Forger made someone an Allomancer, a Hemalurgist could steal that ability and become an Allomancer without needing the soulstamp).[67]

It is possible for a spike to be Awakened, but it would be more difficult than Awakening metal without a Hemalurgic charge.[68] It is theoretically possible to spike a Lifeless, if "there was enough of the soul left for the spike to take".[69] Hemalurgy can also be used to spike a Divine Breath from a Returned,[70] and the recipient would not need to consume a Breath a week.[71] It is unclear if normal Breaths can be stolen using Hemalurgy, since they are primarily in the Physical Realm and not attached to the soul.[72]

It is possible to steal Surgebinding, but it is more difficult compared to other Investitures due to the Nahel bond.[73] Since a spren still has autonomy over the bond,[74] they can break the bond and the Hemalurgist could immediately lose the power.[75] A Hemalurgist can also spike spren[76][77] and spike the Nahel bond from the spren.[78] Doing so would have weird ramifications.[79] In order to effectively steal Surgebinding, the Hemalurgist would need to spike both the Surgebinder and the spren.[80]

It is possible to steal a dead Shardblade, although Hemalurgic decay would lengthen the summoning time.[81]

It is possible to remove a boon and curse granted to someone else from the Old Magic. It is also possible, though much more difficult, to separate the boon and curse.[82]

Hemalurgy can be used to replicate the transformation of a singers Forms.[83] It can also be used to spike the ability to grow a gemheart.[84]

Hemalurgically granted abilities will not create resonances most of the time, though a person can still become a savant with them.[85] The extra abilities gained by a savant cannot be transferred through Hemalurgy.[86]

This article is still missing information. Please help The Coppermind by expanding it.
Retrieved from "https://coppermind.net/wiki/Hemalurgy?&oldid=164954"
Categories: