Telsin Ladrian is a member of House Ladrian and sister of Waxillium on Scadrial.[3] She is a high-ranking member of the Set who is referred to by underlings as Lady Sequence.[4] 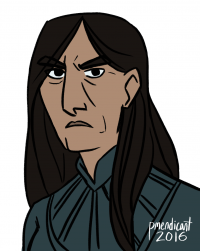 Telsin is middle aged and has dark hair in curls and a rugged body.[5] While living in the Village as a teen, she showed disdain for following rules.[6] Waxillium describes her as duplicitous and manipulative, being good at hiding her true intentions and always being able to get what she wants.[2]

She is a Hemalurgist with three spikes, granting her the power of a Coinshot, a Bloodmaker, and a Leecher respectively, due to the fact that having four or more Hemalurgic spikes would make her susceptible to Harmony's complete control.[7]

Like her brother Wax, she lived in the Village for a time as a youth and was subject to their uncle's attempts to wrest their upbringing from their parents. When Wax left the Village after killing Forch, she did not leave at that time.

She loved to draw, so her uncle kept an easel with a large pad of paper in Ladrian mansion for her use.

Telsin and Wax were not close; they were practically strangers.[3] Over the course of twenty years with very little contact between them, they both fell prey to laxity in their attempts to stay in touch. When Edwarn faked his own death in the carriage accident, he faked hers as well.

Edwarn claims that she recruited him into the Set.

Edwarn reveals to Wax that her death was also faked and that she is "safe."[8]

Wax comes to believe that his uncle is holding her captive. When he confronts him, he tells Wax that if he kills him, "your sister is as good as dead." Wax promises to address her kidnapping after dealing with Bleeder.[9]

Wax finds Telsin under guard in a secret Set fortress in Dulsing. Wax rescues her, and she acts as if she wants revenge on all the members of the Set. When the Set's Thug enters the room, she immediately shoots him dead, blowing their cover and leading to a desperate escape on the skimmer.[5]

Telsin convinces Wax that they must go to the temple before Suit's expedition so that they can claim the Bands of Mourning. As they fly there, the skimmer flies over the group and Telsin "accidentally" causes Wayne to kick a pack overboard, hitting one of the guards and alerting them to their presence.[10] This action, along with her quick shooting of the Thug (who would have revealed her true identity), causes Wax to suspect her.

After encountering Suit and entering the temple, Telsin betrays Wax and shoots him three times before he can escape through a trap. She also incapacitates MeLaan, injecting her and taking her spikes. She was a member of the Set all along. Known as Lady Sequence, she outranks even Suit.[4]

After Marasi finds the Bands of Mourning and turns the tide of the encounter, Telsin attempts to escape on the skimmer. Wayne finds her and shoots her multiple times with a shotgun to avenge Wax's (temporary) death. He figures she has Hemalurgic health anyway, so he doesn't have much compunction about shooting her.[11] After reclaiming the spikes she was carrying, he lets her go.[12] Later, Wax finds the skimmer gone, indicating that she had escaped.[13]

This article is still missing information. Please help The Coppermind by expanding it.
Retrieved from "https://coppermind.net/wiki/?title=Telsin_Ladrian&oldid=169496"
Categories: