“"Here's a tip, kid. Save the wisecracks until your foe is dead. Like this. See how easy it is?" She kicked the corpse in the face. ”

MeLaan is a kandra of the Seventh Generation.[2] 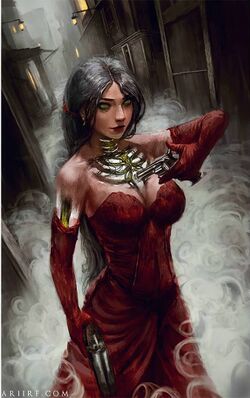 by Ari Ibarra
Pulling a gun from her chest

“Thy snoring is rather loud. It doth be like unto a hundred angry koloss in the middle of a rockslide. Lo, and it doth come near to waking the dead. ”

MeLaan is the only kandra raised by TenSoon and is considered his adopted daughter/little sister.[4][5] She has a hero-worship crush on him, inspired by his gruffness and his adventurousness, which makes TenSoon somewhat uncomfortable.[6] MeLaan wears a willowy True Body made of wood. Its form is unnatural and exaggerated, as are many of the True Bodies of her generation.[7]

MeLaan often takes the form of a very tall (several inches taller than the notably tall Waxillium) and very busty woman named Milan. This True Body is made of a green crystal. However, she also has several others, including one that is ostensibly designed for combat. The skeleton underneath is revealed to be made entirely of aluminum, with many useful implements hidden inside including a reinforced compartment for storage of the part of her that stores her consciousness, needles for stitching wounds, and a set of picks for opening locks. This metal body is very durable (A Feruchemist Brute punched her in the face and her hand essentially exploded).

At some point after the events involving the Lost Metal, she began to favor a more androgynous form. This form is taller than even Wax; has short, blonde hair; and little hint of breasts. When with friends she keeps a relatively similar face, albeit less overtly feminine. She is sometimes seen wearing stylish blue trousers and a buttoned shirt in this form.[8]

Her favorite True Body is emerald.[9]

She occasionally changes her body out of her own will, and does not appear to care about the sex or gender she presents herself as, given how lightly she takes the idea of going to Kelesina Shores's party as a man.[10] Although this seems to have changed to an extent over the years, as she eventually came to prefer a far more androgynous form.[8]

Notably, her personality is much more free spirited than most kandra, and she gets along very well with Wayne, engaging in belching contests on occasion. She is also more lax about following the First Contract than other kandra, and is willing to kill humans if she has to.

As a Kandra, she possesses the ability to shapeshift into various different forms around her True Body. She is also an immortal being, able to live for centuries, and survive wounds that would be fatal to most biological entities, she is also capable of turning off her pain receptors.[11]

She is capable of reforming her body to unlock simple locks.[12]

She can make her flesh go transparent in order to reveal her True Body.

She has various True Bodies made out of various materials, such as emerald and aluminum. She sometimes uses ones with hidden weapons, such as swords in her arms.[13] She can also store guns in her body, which she can pull out at will. Unlike most kandra, she doesn't necessarily follow the First Contract, and thus has little qualms about killing.

As a kandra, she has unknown hemalurgic blessings which grant her powers, form, and sapience. If these spikes are removed, she reverts back to her mistwraith state,[14] returning these to her would return her back to her kandra state.[12]

She is a Worldhopper, and thus knows how to use Shadesmar to pass between worlds.[8][15] 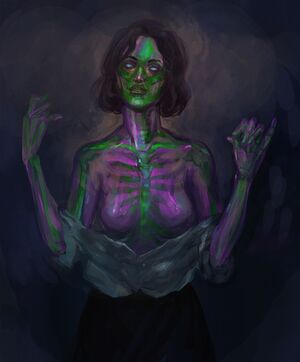 “Life then was like life now, only you have better street food. ”

Before becoming a Kandra, she existed as a mistwraith for an unknown amount of time. But in the seventh century of the Lord Ruler's reign, she was granted form and sapience by Hemalurgic spikes, becoming a kandra of the Seventh Generation.[17] TenSoon was appointed as her "parent", and tasked with raising her as she developed.[6]

MeLaan attended TenSoon's judgement trial. After he was publicly imprisoned, she approached him and offered to help him escape. She also offered to retrieve the Blessing of Potency he took from OreSeur. She believed his claim that Vin was the Lord Ruler's heir, and that the kandra's First Contract had been transferred to her. She took the changes in the outside world –- the mists that remained during the day and constant ashfall -– as signs and proof.

When TenSoon refused to rebel against the First and Second Generations, she accused him of abandoning his people. She was present at his sentencing, after which he escaped.

After KanPaar revolted against the first generation and imprisoned Sazed, TenSoon returned to the Kandra Homeland. He found that Sazed had been taken prisoner with the help of MeLaan. MeLaan then fetched the keys and released the first generation, as well as securing bones for them to inhabit.[18]

Following the Catacendre, her loyalty shifted to Harmony, as she began to follow his orders and act as his hands in the world. It is not known what she did over the majority of the over three centuries between the Catacendre and her interactions with Wax and Wayne.

MeLaan was the kandra who gave Waxillium Ladrian his earring; a hemalurgic spike to let Harmony communicate with him,[19] so that he could eventually come to act as Harmony's Sword.[20]

MeLaan once again met Wax at Lady ZoBell's party. She introduced herself as Milan, a slight mispronunciation of her real name. After seeming to flirt with Wax, she walked away.

After the party, she saved Wax from the Set agents who had ambushed him. She revealed that she was a kandra sent by Harmony to help him.[1]

Later, she met Wax, Wayne, and Marasi at a tavern. She went on to help them on their quest to defeat Bleeder. MeLaan impersonated one of Governor Replar Innate's guards and saved Wax from Bleeder after the rogue kandra revealed herself.[21]

With Bleeder unmasked and on the run, MeLaan attempted to impersonate Governor Innate in her stead with the intent of placating the angry crowed. While the crowd believed the ruse, MeLaan's natural inclinations to mimicry moved her away from the speech that Marasi planed and she ended up inflaming the crowd instead of calming the people down. Before a riot could break out, Aradel intervened. He arrested MeLaan and gained the support of the gathered citizenry by promising them justice.[22]

MeLaan did not know about the true identity of Bleeder and was told only afterward. However she firmly believed that Harmony had done the right thing in not informing Wax of the true identity of his antagonist. After the defeat of Bleeder she continued to impersonate Governor Innate, "hanging" herself in her cell so that she did not have to falsely testify in a court of law.[23] 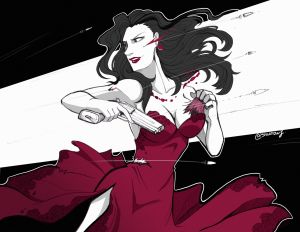 MeLaan agreed to accompany Wax, Marasi, Wayne and Steris on their mission to New Seran in the hope of curing ReLuur's insanity by restoring his spike.[24] ReLuur was injured looking into myths about The Bands of Mourning. Wax couldn’t find MeLaan during the fight, and later found her topless with Wayne in a compartment.[25]

When the group arrived in the city MeLaan shocked several of them by turning into a man, indicating that she was comfortable as either sex.[10] MeLaan aided Wax and Steris at Kelesina Shores's ball, helping Wax escape from the scene after he was framed for Kelesina's murder.[13]

After escaping, she traveled with the party to the crashed Brunstell, where she and Marasi found ReLuur's spike and liberated Allik Neverfar. Together the three of them reconvened with Wax and Wayne and escape on one of the Brunstell's ships called Wilg. After Marasi was injured in the escape, MeLaan was able to graft a piece of Marasi's own flesh onto the wound to heal her.[26]

After retrieving Steris, they went to the second site to retrieve the Bands of Mourning. MeLaan's invulnerability proved critical in reaching the temple where they were supposedly stored, as she was able to survive the damage of the many traps the Sovereign had left behind.[27] However she was immobilized by Telsin on reaching the temple and losing her spikes, reverting to a mistwraith.[14] After the battle for the Bands, MeLaan's spikes were returned by Wayne, and her sentience was restored.[12] The Bands were left in her keeping to keep them from being used for political purposes or conquest.[28]

After the events involving the Bands of Mourning, she began her relationship with Wayne in earnest, but had to be called away on missions by Harmony, sometimes disappearing for months at a time.[29]

At some point during this period, she began to favor a more androgynous form.[8]

Six years later, Harmony gave her a mission of going to other worlds in the cosmere to help deal with the rising threat of Trell. Before she left, she broke up with Wayne.[9]

While in the Cognitive Realm, she met with a Sho Del named Jan Ven, who ferried her across the interplanetary sea.[15] At some point during this boat ride, nineteen months after the detonation of the Set's harmonium bomb, she received a message from Harmony about Wayne's death, shortly before arriving on the shores of a currently unknown planet.[15]

TenSoon essentially raised MeLaan,[4][6] and she is roughly considered to be his daughter or little sister.[5] As a result of his gruffness and adventurousness, sometime before the Catacendre, she began to hero-worship him in a way that bordered on romantic attraction and made TenSoon very uncomfortable.[6] They still appear to be close after the Catacendre, with MeLaan noting he would be proud of she can still adopt difficult accents and asking Wax not to tell TenSoon that she had to kill people again, as kandra killing people upsets him.[30][1]

VenDell considers MeLaan to be his sister, and cares for her, though he wishes that she would act with more tact. They tend to make witty comments back and forth between each other.[24][31]

She is in a close relationship with Wayne, with him being attracted to her easy-going manner and free spirit,[32] and her admiring his skill in accents and disguises, considering him "wasted as a human."[30] After the events in the south, she began a romantic relationship with him, despite the warnings from her fellow Kandra about how differently humans experience time.[9]

The relationship wasn't as meaningful to her as it was to him, due to differences in how they experienced the passing of time, but she still treasured her time with him,[9] and greatly mourned his death.[15] She thought of it as a mere fling at first, but it was far more to her, as he made her forget what she was and made her forget what was the smart thing to do.[15]

Their relationship is sexual in nature, she claims that he gave her the best sex she's known.[25][9] They are known to have engaged in bondage.[33]

She was the one who gave Wax the Hemalurgic spike earring in order to put him in contact with Harmony.[5][expand]

This article is still missing information. Please help The Coppermind by expanding it.
Retrieved from "https://coppermind.net/wiki/MeLaan?&oldid=170838"
Categories: