This page or section contains spoilers for The Lost Metal!
This information has the ability to potentially ruin elements of the plot for the reader. Proceed with caution if you have not read this book.
This page or section needs to be updated with new information for The Bands of Mourning and The Lost Metal!
Be aware that in its current state, it may not include all additional content yet.

Allik Neverfar is a Southern Scadrian, a member of the crew of the airship Brunstell, which was captured by the Set in 342 PC. After being rescued by Marasi Colms and MeLaan, he joins in their efforts to recover the Bands of Mourning. 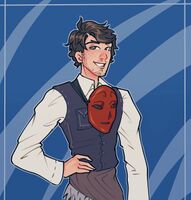 Allik is twenty two, and has a short wispy beard and moustache, which make him look younger.[2] Like all Malwish, he wears a red and black mask over his face at all times.

Allik seems to be a bit of a free spirit, and is not afraid to say whatever happens to come to his mind. He is the most comfortable of the Brunstell’s crew in interacting with the Northern Scadrians, and doesn’t seem as put off by their maskless state as the Southerners.

Allik subscribes to the customs of his people in his dealings with Allomancers, although the titles he uses for Wax, such as "O Great Impetuous One" and "Unobservant Master" are not always the most respectful.[3][4] 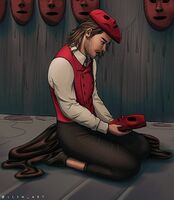 “You have to be something more special than that, if you want to fly. We're expected to be gentlemen and ladies. We’ve thrown people overboard for not knowing the proper dance moves. ”

Allik does not possess any Allomantic or Feruchemical abilities, but he is able to use the Metallic Arts through the medallions his people produce. He displays an extensive knowledge of some Metallic Arts, as he is able to tell with just a glance what Wax’s abilities are.[1] However, he seems to be less familiar with temporal Allomancy, as he does not initially realize that Marasi and Wayne are Allomancers.

Allik's dancing is not good enough to impress his captain, despite his efforts rescuing her and the crew.[6] 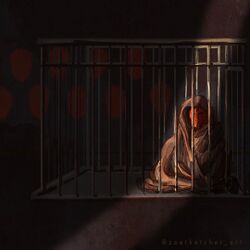 by zoethatcher art
Trapped in the cage

Allik grew up on the south pole of Scadrial, as part of the Malwish nation in a town named Wiestlow.[5] He flew north on the airship Brunstell under Captain Jordis as a pilot for the shuttle Wilg. After the Brunstell was downed in the Seran Range, Allik was captured by the Set along with the rest of the crew.

When Wax's team infiltrated the Set’s base outside of New Seran, Marasi and MeLaan discovered Allik in a cage, and freed him from his imprisonment.[2] Discovering the remains of some of his crewmates, Allik then helped them escape the Set by piloting the Wilg[1] and led them to the Sovereign's Temple to seek the legendary Bands of Mourning, which his crew had originally gone searching for.[7] Allik entered the temple alongside the others, and was greatly surprised at Melaan's lack of care approaching the various traps.[3] He traveled through the temple, past the traps after Melaan triggered them.[4] Allik was taken captive by the Set alongside Marasi and Steris,[8] where he almost died in the freezing cold due to the Set taking his heating medallion off of him.[9] When Marasi used the spear head that was the Bands of Mourning to fight the Set, Steris gave Allik a medallion she had hidden inside a notebook, saving him from the cold.[10] He managed to grab hold of more medallions, and give them to the rest of the surviving Southern Scadrian crew, freeing them and helping defeat the Set.[6] Allik returned with his fellows back to his homeland, after gifting Marasi his old, cracked mask.[11]

Marasi finds Allik in a cage, captured by the Set alongside his companions, and is the one to release him. She consoles Allik after he discovers the gruesome sight where the Set tortured his fellow crewmates.[2] Allik gives Marasi his mask before the Brunstell departs Elendel, leading Wayne to remark that Allik might have a crush on Marasi.

Due to the fact that he was raised to revere Metalborn Allik treats Wax with reverence. Wax finds this annoying and often tells Allik to stop.

Allik refers to Wax with many different titles during their time together.

This article is still missing information. Please help The Coppermind by expanding it.
Retrieved from "https://coppermind.net/wiki/?title=Allik_Neverfar&oldid=168914"
Categories: