From The Coppermind
Jump to navigation Jump to search
This page is part of the June 2020 objectives!
It is currently unclaimed, add |claim={{subst:REVISIONUSER}} to this template and save before making your changes.
By the Forgotten Gods!
This page has extensive spoilers for all of the Mistborn books and short stories, particularly the ending of The Hero of Ages.

“The religions in my portfolio weren't useless after all. None of them were. They weren't all true. But they all had truth. ”

Sazed is a Terrisman steward from Scadrial.[3] He is friends with Kelsier and other members of Kelsier's crew. Though he is a Keeper he is considered something of a rebel by the other Keepers. He is the current Vessel of the Shard of Harmony.

He was soft spoken, kindly and, due to the Lord Ruler's breeding program, very docile. He had a shaven head and wore robes with arrow patterns as was common to all Terris stewards. Sazed, as a Keeper, has many earrings, bracelets and bands that act as his Feruchemical metalminds.[4]

Prior to ascending to Harmony, Sazed was a Feruchemist.

Sazed's focus as a Keeper was religions, and he knew over 500 that existed prior to the Ascension of the Lord Ruler.[5] He made a habit of preaching various religions to people, trying to find the one that fit them the best.[3] Though many of them contradicted each other, he believed there was truth behind all of them.[6] Following Tindwyl's death, he stopped preaching the religions he knew to others and rejected all belief, trying to find a way to empirically verify the religions.[7] After learning the old Terris religion from the kandra and considering peoples' faith in the context of their lives, he once again accepted the truths of his religions and adopted the Terris faith.[8] During his Ascension, the truths recorded by the various religions provided the knowledge he needed to restore Scadrial to its pre-Final Empire state.[2] The following is a list of the religions Sazed mentioned:

Sazed played the role of Kelsier's, and later Vin's steward and played a crucial part in the downfall of the Final Empire. He was the only Terrisman to actively support the skaa rebellion. He trained Vin in the ways of noble court life while she prepared to play the part of Valette Renoux. He accompanied Vin to Luthadel balls, where he often met with other terris stewards to gain intelligence. He swore a vow to protect Vin and saved her life on two occasions. He first rescued her from the Steel Inquisitors when she and Kelsier tried to break into Kredik Shaw. Later he came to her aid when she was captured by the Lord Ruler. Sazed assisted in translating Alendi's journal which eventually assisted Vin in discovering that the Lord Ruler was not Alendi, but Rashek and so devise a method to defeat him. He also acted as a medic to both Kelsier and Vin. 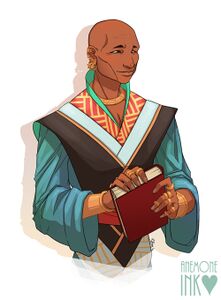 A portrait of Sazed by Kit Buss

After the Lord Ruler's death, Sazed left Luthadel in order to fulfill his duty as a Keeper and spread the knowledge of the time before the Lord Ruler to the people of the Final Empire. Sazed's carried the complete knowledge of the Terris people, but his specialty was religion, especially those from before the Final Empire. He came across mysterious deaths somehow related to the mists.

He was then found by Marsh, who led him to the Conventical of Seran and found the last words of Kwaan inscribed on a metal plate. Sazed then left his duties as a Keeper in order to bring his important knowledge and his aid to Luthadel, especially that concerning his fears concerning the deaths caused by the mists.

Sazed returned to Luthadel and worked with Kelsier's old team to convince Vin and Elend Venture to leave the city before it fell to the besiegers. Sazed attempted to spare Vin and Elend by drawing them away from the siege with a fake map to the Well of Ascension. While in Luthadel, Sazed found himself falling in love with a Terriswoman Tindwyl, a member of the Synod who had come to Luthadel train Elend. He studied Kwaan's message with Tindwyl who became as captivated by it as he. Sazed and Tindwyl fought to defend the city during the Koloss attack and Tindwyl was killed. Sazed was left to help defend Luthadel and used his metal minds to great effect. Vin realized that the Well of Ascension was in Luthadel and returned only just in time to save Sazed from some koloss.

Sazed eventually realized that Vin should not release the power at the Well of Ascension and tried to prevent it, but was stopped by Marsh. He had discovered that Ruin was changing the words on Sazed's copy of Kwaan's message, so Sazed returned to the Conventical to find that Kwaan had left a warning: "Alendi must not reach the Well of Ascension, for he must not be allowed to release the thing that is imprisoned there." 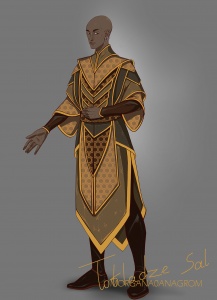 Sazed suffered from depression after Tindwyl died in the battle for Luthadel. He refused to wear his metalminds and was convinced that all religion was a lie. He further refused to lead the Terris people living above the Pits of Hathsin. He left Luthadel for the city of Urteau with Spook and Breeze, and used his knowledge of engineering to help reclaim the city. While in Urteau, he searched through his gathered religions for truth, finally giving up until TenSoon promised to show him the ancient Terris religion. It was only when he found himself in the Kandra homeland that he became interested in religion again. He discovered that the First Generation were actually ancient Feruchemists and thus practitioners of the old Terris religion which the Keepers had been seeking.

After Vin took the shard Preservation and attacked Ruin, both she and Ati, the vessel of Ruin, were killed. Sazed took control of both Ruin and Preservation and ascended. The event later came to be known as the Final Ascension on Scadrial. He used the power of his shards along with knowledge from his metalminds to remake Scadrial as it had been before the Final Empire. He came to be known by the name Harmony.[17] His Feruchemical rings survived his ascension, as relics.[18]

There are subtle hints throughout The Hero of Ages indicating that Sazed is said Hero. Here is an example from a pre-chapter monologue:

“The question remains, where did the original prophecies about the Hero of Ages come from? I now know that Ruin changed them, but did not fabricate them. Who first taught that a Hero would come, one who would be an emperor of all mankind, yet would be rejected by his own people? Who first stated he would carry the future of the world on his arms, or that he would repair that which had been sundered? And who decided to use the neutral pronoun, so that we wouldn’t know if the Hero was a woman or a man? ”

This article is still missing information. Please help The Coppermind by expanding it.
Retrieved from "https://coppermind.net/wiki/Sazed?&oldid=125190"
Categories: