Straff Venture is a noble on Scadrial during the Final Empire. He is the head of House Venture, the most powerful great house of the high nobility. He is the father of Elend and Zane.

Straff is a manipulative and sadistic monster. He is extremely fond of posturing and demonstrating his superiority, and is terrified of anyone having power over him. He enjoys going to brothels knowing that the skaa will be executed, as it gives him a sense of power.

Straff is a very skilled and experienced Tineye, able to smell even an almost odorless poison in a aromatic tea. He is able to replicate Amaranta's drug cocktail based on the smell of the ingredients. Unlike most other Allomancers, Straff doesn’t keep his abilities secret, in order to show off his superiority and fearlessness.[1] 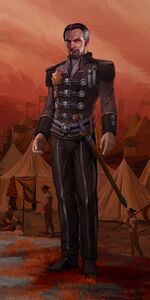 by Oliver Specht
Straff during the Siege of Luthadel

During the Final Empire, Straff is the head of the most powerful of the nobility, House Venture, and controlled the atium mines at the Pits of Hathsin for the Lord Ruler.

After the fall of the Lord Ruler, he proclaims himself king of the Northern Dominance. After securing this area, he lays siege to Luthadel in order to gain possession of the Lord Ruler's fabled atium cache.

He invited Elend over to his warcamp for a meeting, and the situation escalates until Straff sends his guards to kill Elend. However, Elend uses Vin to threaten Straff and manipulate Straff's emotions. Straff succumbs to his fear and lets Elend and Vin leave unharmed. After this encounter, Straff becomes terrified of Vin, commanding Zane to kill her.

One of his spurned mistress, Amaranta, poisoned him with an addictive drug, Black Frayn. Working with Zane, she caused Straff to believe that Zane is poisoning him, while Amaranta "cures" him with the addictive drug. When Zane disappeared from Straff's camp, Amaranta attempted to kill Straff with a poison. Straff realizes her betrayal, and in a fit of rage, strangles Amaranta to death. Straff nearly died but survived with a random antidote he made himself.[2][3]

He was killed by Vin after letting the koloss army attack Luthadel. Control of his army was given to Janarle who was forced to swear allegiance to Elend.

Elend is Straff's only known legitimate child. Straff is constantly disappointed in Elend, and constantly belittles him. His abuse includes forcing Elend to sleep with a skaa prostitute when he was just thirteen, saying it was about time he became a man.[4] In the aftermath of the Lord Ruler's death, Straff flees from Luthadel, abandoning Elend to fend for himself.[5] Elend not only survives, but makes a deal with the rioting skaa, and reigns briefly as king of the Central Dominance.[6] Straff amasses his own force in his home dominance, and marches them to Luthadel to attempt to take the city from Elend, who he sees as weak.[7]

Straff's relationship with Zane is arguably even more strained. Straff bribes Zane with atium to keep him in line, since he fears what Zane might do to him in his insanity.[8] However, Straff is unaware that Zane has his own atium stash, and the two maintain an uneasy truce, while repeatedly trying to kill each other.[8][9][2]

Straff has many mistresses and sires many illegitimate children in an attempt to acquire more Mistborn and Mistings.[2] His attempts are successful, and though among his many children Zane is his only Mistborn,[2] his Misting children number around eighteen.[9]

Straff's proclivities regarding his mistresses are depraved, even for a Luthadel nobleman. He is fond of skaa brothels and goes to them regularly.[10] He describes Amaranta, who is in her late twenties at the time, as having been quite attractive a decade before and says she is now too old to be attractive. He usually gets rid of his mistresses long before they reached her age.[8] He parades a mistress who bears a resemblance to Vin, who is perhaps fifteen years old before Elend and Vin, in an effort to induce a reaction and intimidate them with this display of casual cruelty.[11]

Several of these mistresses, including Amaranta, serve a purpose other than pleasure and attempting to have Allomanticaly gifted children. Amaranta acts as Straff’s chief herbalist, which is why he keeps her with him even after he no longer finds her attractive.

This article is still missing information. Please help The Coppermind by expanding it.
Retrieved from "https://coppermind.net/wiki/?title=Straff_Venture&oldid=176909"
Categories: