“My dear friend, the entire point of life is to find ways to get other people to do your work for you. Don't you know anything about basic economics? ”

Edgard Ladrian, better known as Breeze, is a member of Kelsier's crew on Scadrial.[2] 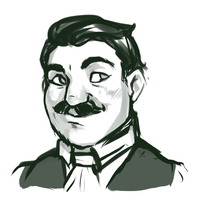 He is commonly described as "portly", though he has lost weight at various points.[3] He wears extremely colorful clothes, and has black hair and a mustache.[expand] Breeze is often lazy, and delights in getting people to do things he doesn’t want to do, such as fetching him drinks.[3]

He is a Soother, who subtly Soothes everyone he comes across. This leads him to be mistrusted by many people. They are reluctant to do anything for him, as they are worried he might be Soothing them.[3] He is believed by Kelsier and many of his crew to be one of the most skilled Soothers on Scadrial. He helps to teach Vin some of the more in-depth aspects of Soothing. He has a refined and intricate control over his Soothing, and is skilled at Soothing people without them noticing. He does this to Vin on a few occasions.[4] He could influence several hundred people at once.

Breeze was invited by Dockson to attend Kelsier's meeting in Camon's old lair. He and Ham arrived around the same time and met Vin. She got angry when she realized he was Soothing her. When Kelsier explained his plan, Breeze joined his crew.[3] 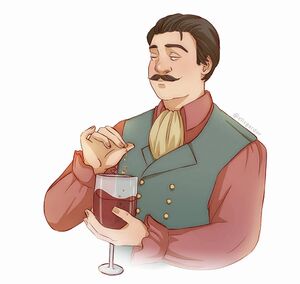 In the crew, Breeze was often used by Kelsier to interact with nobles, and he had several aliases among the different noble families.[1] During the overthrow of the Final Empire, he operated with a team of Soothers and Rioters to recruit skaa for their army.[4] During one of the meetings he taught Vin how to use zinc and brass. After the rebellion when Elend became king, Breeze helped him write his speeches, as he was very skilled with persuasion even without using his Soothing. At some point he left to spy on Cett. He began a relationship with Allrianne Cett while he was in the service of Lord Cett. When Cett attempted to invade Luthadel, he reunited with the crew. He tried to hide his relationship with Allrianne because of the huge age difference between them, but everyone found out when she arrived begging for protection.[5] It was later discovered that she was a Rioter, and had been Rioting Breeze's emotions.[6] Breeze often Soothed members of the crew to make them more confident, although he did not want anybody to know about this because he would lose his reputation for being uncaring.[7]

It was believed that he is a half-skaa, but is truly a nobleman in hiding by the name of Edgard Ladrian.[8][9][10] After the Final Ascension, he becomes known as the Counselor of Gods,[11] and founds House Ladrian. He is the ancestor of Waxillium Ladrian. One of his hands was given to a Kandra, and is still in use after the Catacendre.[12]

This article is still missing information. Please help The Coppermind by expanding it.
Retrieved from "https://coppermind.net/wiki/?title=Edgard_Ladrian&oldid=165632"
Categories: