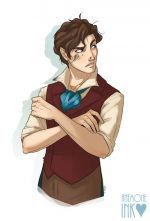 He was the only legitimate son of Straff Venture, and heir to House Venture. When he was a child, he was beaten to near death to determine whether he was an Allomancer or not. His mother had a great influence on him.[5] His father made him sleep with a skaa woman in a brothel to make him a "real man."[6] He was later horrified to learn that the woman would be executed to prevent half-breed children[7]. Throughout his childhood, he was known for disobeying his father purposely to get a response out of him. This included ignoring guests at parties, and disobeying his father's orders. Elend was predominately a scholar and was well versed in many areas including politics and history. He is extremely idealistic and meets with a group of other idealistic nobles after balls to discuss contraband philosophy. 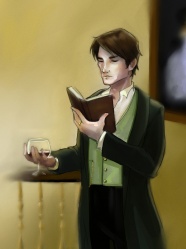 At the time of the Collapse, Elend is 21 years old.[8] He meets Vin at a ball in Keep Venture, and begins a casual friendship with her when he finds her in the space where he usually reads[4]. Elend continues to attend balls and often sits with Vin and reads at her table. He eventually begins to court her.

Elend is saved by Vin from Shan Elariel's assassination attempt[9]. He sends a spy to keep an eye on Vin, and believes Vin to be a spy for another noble house and refuses to speak with her. He later discovers that she is in fact a skaa thief and tries to find her.

After OreSeur is exposed and the Renoux household captured, Elend attempts to rescue Vin, believing she was captured as well. He is saved from being killed by an Inquisitor by Kelsier who protects him knowing Vin loves him[10]. Elend eventually mounts a rescue for Vin in Kredik Shaw, where she has been imprisoned, only to find that Sazed has already released her[11].

After the Fall of the Lord Ruler, Elend is made king over the Luthadel Assembly. He attempts to introduce all the political ideas he has formulated from his studies and meeting with other nobles over the years. His rule is destabilized when Straff Venture and Ashweather Cett besiege Luthadel in the hopes of securing the atium cache that they believe to be hidden there. During the siege, he is deposed as king by the Luthadel Assembly, under a clause he wrote himself[12]. Elend begins to receive training from Tindwyl in how to be a more effective leader, which allows him to effectively try to be re-elected as king. However, he loses the vote to Penrod.

Sazed and the rest of Kelsier's crew convince Elend and Vin to leave Luthadel in order to seek the Well of Ascension[13]. While they travel north towards the Terris Mountains with Spook, they realise the truth, that their friends had lied in order to get them out of the city and save their lives. Elend and Vin come across Jastes Lekal fleeing Luthadel because his koloss army had turned on him. Elend beheads Jastes for leading the koloss army to Luthadel and then leaving them to attack the city[14]. Upon their return, Vin defeats the armies, forcing them to swear fealty to Elend as the emperor of the New Empire[15].

While searching for the Well of Ascension beneath Kredik Shaw, Elend is attacked by the mist spirit in an attempt to get Vin to use the power from the Well to save him, but she chooses to release the power, inadvertently releasing Ruin in the process[16]. Following this, the mist spirit directs Vin to the last remaining bead of lerasium at the Well, and she uses it to save his life, transforming him into a Mistborn and allowing him to burn pewter[17].

Elend and Vin decide to take their armies and besiege Fadrex City in the hopes of gaining the contents of their atium stores[18]. They take many koloss soldiers whose control they had previously wrenched from several Inquisitors. While in Fadrex, He and Vin attended balls thrown by the proposed king, Aradan Yomen[2]. Late in the siege, he and Vin lose control of their koloss, leading to the koloss wreaking havoc on their soldiers, before running off into the night[19]. After this happens, Yomen allows Elend into Fadrex and seems to seek his help due to the disappearance of the mists, but Elend leaves Fadrex shortly after these events transpire, taking with him some atium Yomen gives him [20]. 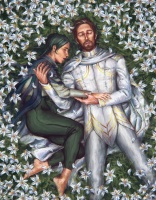 Elend eventually realises the meaning of the pattern of the mist-sickness which snaps allomancers, and also discovers the Seers in his army were those who were sick the longest. He uses this knowledge to lead the Seers in battle against the koloss armies under Ruin's control, depleting all of the Atium stored in the kandra Trust. He fuels the last of his Atium with duralumin, seeing the ultimate outcome of his actions. With the knowledge gained from this, he allows Marsh to kill him, giving Vin the drive to attack Ruin directly[21], resulting in both of their deaths and Sazed's Final Ascension[22].

This article is still missing information. Please help The Coppermind by expanding it.
Retrieved from "https://coppermind.net/wiki/?title=Elend_Venture&oldid=134103"
Categories: