Zane shares certain phenotypic characteristics with his family such as brown curly hair, which he tends to keep shorter than his brother. He has a wiry build with a narrow face and is of medium height. He often wears all black and, despite being a Mistborn, does not wear a mistcloak.[1] Zane had a difficult childhood, as Straff kept his existence secret due to his skaa lineage. Because of his harsh upbringing, Zane has an unstable personality, and engages in dysregulated behavior, such as cutting himself.

Zane is a powerful Mistborn, the strongest Vin has met since Kelsier. This is, in part, thanks to a steel Hemalurgic spike in his heart, which grants him great precision when using Allomantic steel.[2] However, a consequence of this spike is that Ruin can speak with Zane, and often tells him to kill everyone around him, leading Zane to believe he is insane. Zane refuses to let his insanity control him and he resists following Ruin's orders.[3] 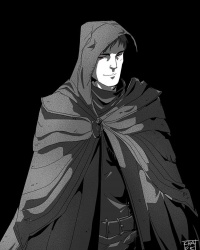 At some point after he Snapped, Zane received a Hemalurgic spike.[6]

Straff, suspicious of his son, believed that Zane was constantly attempting to assassinate him. Whenever Straff thought he had been poisoned by his son, he sought help from his former mistress, Amaranta, who provided him with an antidote.[3] Unfortunately for Straff, Zane and Amaranta were lovers and the woman was working with Zane to convince Straff he had been poisoned, while instead providing him with an addictive substance masked as an antidote.[7] Zane capitalized on the substance's withdrawal effects to convince Straff he was repeatedly being poisoned. Eventually, Straff attempted to have Zane killed in his sleep, however, his plan failed, and Zane left Straff's camp to seek out Vin and take her away from Luthadel.

Zane, wanting Vin to himself, attempted to convince her that she did not belong in Elend’s world, and instead should run away with him. As an attempt to sway her, he sent several of Straff’s Allomancers to attack Vin and Elend during an assembly meeting meant to determine the future leadership in Luthadel. Zane later approached Vin regarding the attack and told her that Cett had been behind the assassination attempt. Zane offered to help Vin get revenge and the two descended upon the portion of Cett's army that was housed in Keep Hasting, killing roughly a third of the enemy soldiers. Vin hesitated when presented with the opportunity to kill Cett, prompting Zane to try and kill the man instead. Vin persuaded him otherwise, leaving Cett alive.

Zane visited Vin one last time to try and persuade Vin to leave with him, promising they could go wherever she wanted. Conflicted, Vin began to follow Zane before deciding that leaving was the wrong choice. She attempted to voice her concerns to Zane, however, he became filled with rage and attacked her, using atium to give himself an advantage. Several times throughout their fight, Zane repeated that Vin was supposed to save him, presumably from his insanity and Ruin’s voice. In the end, Vin used Zane's reactions to her atium shadow to give herself two atium shadows (as Zane's actions changed the future he saw thanks to atium) and stabbed him in the neck, killing him.[8] Before he died, Ruin revealed to Zane that he was never insane.

This article is still missing information. Please help The Coppermind by expanding it.
Retrieved from "https://coppermind.net/wiki/?title=Zane_Venture&oldid=142685"
Categories: