Allrianne Cett is a noblewoman from the Western Dominance and Rioter on Scadrial during the Final Empire and subsequent Collapse. She is the daughter of Ashweather Cett and is in a relationship with Breeze.[1][2]

Allrianne is described as youthful and cute. She has golden hair that is long and bouncy, owing to both her Western roots and her continued use of Final Empire styles. She is graceful like most noblewomen, but she also drops her dignified air to express high energy. She is first seen in a red dress after the current styles popular with the nobility, and is rarely seen out of such clothing. [3] While in Urteau, she is forced to wear plain brown skaa dresses, but continues to wear fancy ones within the safety of the city's storage cavern. She is disgruntled about the restriction but follows the law. [4]

Allrianne is perceived by many as a young, naive girl. She uses this perception to manipulate others at the same amount and level as her romantic interest Breeze, as seen by Sazed and as a Rioter rather than a Soother.[4] She is confident and demanding in both Allomancy and personality. From the moment she arrives in Luthadel for the first time, she expects to be taken care of at the level of living she is used to. Vin witnesses her listing off favorite foods to servants and arranging a bath the moment she knows she will be staying.[3] Despite this need for comfort, she is repeatedly willing to go outside her comfort zone in order to protect or help those she loves. Not only does she bring her father back to Luthadel in order to assist Breeze, she also travels to Urteau despite knowing the city's political climate and hatred for nobles. She was in the most immediate danger by going there as a full blooded noble.

While Allrianne admits that her father cares little about the skaa, there are repeated mentions of Allrianne's own lack of indifference towards them. When she goes shopping with Vin, she admits that she knows Breeze is half-skaa. She feels pity for them, and more specifically for Vin, at the time, but still treats Vin as a friend.[5] Later, when she witnesses Quellion's executions, she begins crying and riots the crowd's emotions. This is no passive grief. She, intentionally or not, almost begins a riot as a result of her hatred for what Quellion is doing.[4] Her feelings come through in her very active interactions with those around her.

Breeze seems to have some compunctions about influencing people in his love life, but Allrianne has no such worries. Cett informs Elend in their meeting that he is certain Allrianne has seduced Breeze, rather than the other way around. [6] Vin witnesses her doing so when she spies on Breeze and Clubs, and later she muses on the difficulty of getting Breeze to love her. Even when thinking about the seduction, she has no worries about its morality or the truth of their relationship, only finding it to have been a fun challenge. [7]

Allrianne is a very skilled Rioter, and is able to influence hundreds of people at once.[4] She can easily manipulate people to help her or act the way[7] Though it is unclear whether her seduction of Breeze[8] was a result of that, or just her natural charm.

She also rides with an easy mastery, capable of staying on the back of a galloping horse even in a frivolous dress.[9] 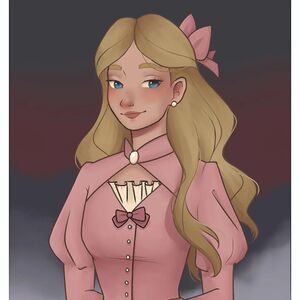 Allrianne grew up in Fadrex City distanced from court, but was taught the customs by her mother. She was likely prepared to be married off to create a beneficial alliance.[5] She was the first Allomancer to be born in the Cett family for centuries.[10]

When Breeze went to the Western Dominance, Allrianne seduced him by Rioting him to be attracted to her.[6][11] After Breeze convinced Ashweather Cett that the atium cache was in Luthadel, Allrianne went with Cett's army and entered the city alone, during the siege, to both seek asylum and to find Breeze.[3]

Tindwyl selected Allrianne to accompany Vin on a shopping trip for dresses because she knew the fashions of the time. Allrianne attempted to bond with Vin during the carriage ride there but was largely ignored by Vin. She ended up attracting Spook's attention, which turned out to be fleeting and was better kept by a crowd that gathered to see Vin.[5]

Allrianne left Luthadel with Elend, Vin, and Spook on the pretense of going to find the Well of Ascension, after being prompted by Breeze, so that she would survive.[12] Allrianne left the group after they passed Straff Venture's army to persuade Cett to help the Luthadel army.[13]

Allrianne encountered a group of bandits, the leader of which was Hobart, and promised them a reward to guide her to her father's camp. Allrianne convinced Cett to turn around and head back towards Luthadel to gain something off of their arduous trip and to help Breeze.[7]

Breeze finally openly admitted to having a relationship with Allrianne, though he refused to marry her officially.[9] Allrianne and Breeze, along with Captain Goradel and Sazed, went to Urteau, where they found Spook, to officially act as ambassadors while retrieving supplies from the cache and to help quell a rebellion.[16] Allrianne was in the storage cavern when the Final Ascension occurred and was transported to the Elendel Basin with Ham and Demoux when Sazed changed the world.[17]

During the founding of Elendel and the time after the Final Ascension, Allrianne gave speeches on workplace equality and feminist themes, which codified a culture in which women were expected to be able to remain feminine while working.[2] Allrianne was referred to as one of the Originators.[18]

She cares very much about Breeze, enough to ride out and convince her father to turn back and help Luthadel, and therefore Breeze, survive.[7][expand]

“The young woman's expensive dress-- light red silk with a shawl and lace sleeves-- might have lent her an air of dignity, had she not scampered forward as soon as Breeze entered the room. ”

—The first description of Allrianne.[3]

“All right, what was that pink thing I just passed in the hallway? ”

—Vin on her first meeting with Allrianne[3]

“Getting a man like him-- a man so expert in Allomancy, so determined that his age made him inappropriate for her-- to love her... well, that had been a true accomplishment. ”

—Allrianne on her seduction of Breeze.[7]


By the Forgotten Gods, Sazed thought, finally recognizing her touch on his emotions, Rioting them to make him angry at Quellion. She's as good as Breeze is.

“Why not? He deserves it. I could make this crowd rip him apart ”

—Allrianne speaking to Breeze about rioting the crowd at one of Quellion's executions while in Urteau.[4]

This article is still missing information. Please help The Coppermind by expanding it.
Retrieved from "https://coppermind.net/wiki/?title=Allrianne_Cett&oldid=164217"
Categories: