This article is about the Lord Ruler's empire. For the first book in the first Mistborn series, see The Final Empire.

The Final Empire was the major state on Scadrial for over 1000 years.[1]

As the Deepness gained strength and caused more problems, Alendi, considered to be the Hero of Ages, conquered the world then traveled to the Well of Ascension, ostensibly to defeat the Deepness. When Alendi's travelling party was almost at their destination, Rashek killed Alendi and entered the Well of Ascension in his place. During his Ascension, Rashek used to power to remake the world and create a number of new species including the mistwraiths. He also used his power to fundamentally alter the planet's location and ecology, even changing the humans that populated it into skaa and nobles.[2][3]

After returning from the Well of Ascension, Rashek impersonated Alendi,[4] and bribed several monarchs into supporting him by giving them beads of lerasium.[5] He then conquered, killed, or suborned his remaining rivals, and founded the Final Empire, proclaiming himself the Lord Ruler. He ruled over his empire for another millennium.[1]

As the Lord Ruler, Rashek built a stable and self-sustaining empire. No dissent was tolerated, not even from nobility, and all religions except his Steel Ministry were banned. The last religion to keep fighting, the Valla, was destroyed in the late fifth century of his rule.[6]

At some point Rashek attempted to destroy the Final Empire.[7]

Kelsier's crew planned the Skaa rebellion, resulting in the fall of the Final Empire. The empire fractured into several competing kingdoms, but eventually consolidated under Elend Venture's New Empire.[citation needed] 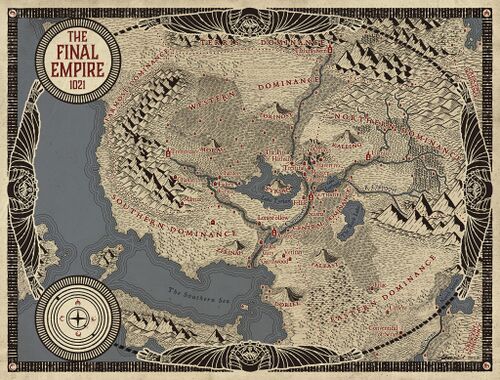 by Isaac Stewart
Map of the Final Empire

The lands surrounding the Central Dominance, which held the capital, Luthadel, contained the seven Ashmounts; Tyrian, Zerinah, Faleast, Doriel, Morag, Kalling and Torinost. These seven mountains spewed ash into Scadrial's atmosphere, cooling the world down. This was the Lord Ruler's solution to his alterations of the planet's orbit.[8]

Canals were used extensively, as the ash built up quickly away from civilization.[9]

The Lord Ruler suppressed most technological advances, killing everyone who discovered gunpowder and the knowledge associated with it.[10] He did allow some advances such as the implementation of canneries, allowing for the easy storage of food.[11] The currency includes Boxings and Clips.[11][12]

The Final Empire had somewhere around a hundred million citizens. A couple million of those lived in Luthadel.[13]

The empire had a standing army around Luthadel including a number of garrisons. The Luthadel Garrison consisted of twenty thousand troops, mostly skaa, and many of the smaller towns in the Central Dominance had smaller Garrisons of their own, such as Valtroux and Holstep.[14] There is also a substantial army of koloss who can be under the control of the Lord Ruler or a remote Inquisitor. The Canton of Inquisition itself is trained to have formidable warriors, each member more than capable of overcoming any target. The Noble houses operate guardsmen, militias and armies when necessary.

The Lord Ruler used the kandra as spies with the ability to accurately imitate and replace anyone whose skeleton is available.[15]

The descendants of the people who originally supported the Lord Ruler during his rise to power are now the nobility of the Final Empire.[16] The Lord Ruler and his allies had access to beads of lerasium, and gained Allomantic powers. Because of this, certain nobles gain the use of Allomancy. There is a wide range of nobles, from the high houses to the impoverished.

Skaa descend from people who did not support the Lord Ruler. When he ascended, the skaa were changed so they were more fertile. Skaa cannot become Allomancers unless they have noble blood recently in their lineage. Skaa are essentially slaves, property for nobles to exchange between them, although they are ultimately owned by the Lord Ruler.[17] The best-off skaa will be craftsmen or tradesmen. They and their families will live in relative comfort, but this happens very rarely for skaa.[18] Normally, even the highest skaa are subject to the whims of the nobility[18]. However, far from the center of the empire, skaa can own land andd achieve wealth[19].

The Steel Ministry and its obligators are the main bureaucracy for the Final Empire. Despite officially being a religious institution, in reality the Steel Ministry was based on the bureaucratic mercantile system of the Hallant.[20] The main purpose of this bureaucracy was to monitor the noble houses who engaged in financial activity under this system.[21][22] The noble houses themselves were primarily financial organizations in nature. They also maintained the Lord Ruler's empire from their keeps.[21] The Great Houses control most trade and enslave most of the Empire's skaa population[18].

The structure of Dominances, in Vin's time, involves provincial lords each with command of, and responsibility for, their own skaa. This organization has been in place for two hundred years and grants the nobility greater freedom than previous systems. The Lord Ruler seems to be uncomfortable with this and counteracts it with increased obligator activity [23].

The atium economy acts as one of the many ways the Lord Ruler takes a firm hold on the Final Empire. Its scarcity, along with its godly Allomantic use, makes atium an extremely valuable currency; a small bead being valuable enough to cover the cost of living for a skaa for several years.

The only place atium can be mined is at the Pits of Hathsin, where skaa criminals are sent to work as punishment for their crimes until death. A noble house is in charge of the profitable mining camp, with House Venture being the last House to oversee the operation before the destruction of the mine. The fact that atium is mined here is kept top-secret. Not a single prisoner has escaped before Kelsier, hence his nickname "the Survivor of Hathsin".[24]

A portion of the atium mined at the Pits of Hathsin is secretly transported to Luthadel by the Canton of Resource, mixed into and disguised as Ministry funds. Since metal coins radiate powerful light in the Cognitive Realm, the atium beads, when mixed with other coins, can be transported safely without being discovered by Ruin.[25]

Kandra are known to only accept atium for their service. Their "contract", purchased with steep prices, provides the Kandra's absolute loyalty and their powerful imitating skills. However, the fulfilling of Contracts actually has another purpose. All the atium they earn is brought to their Homeland where it is stockpiled in a metal vault, the Trust. They do this on account of their First Contract with the Lord Ruler. For atium is condensed power of Ruin, by storing it in a place where Ruin has no influence, they deny him access to a part of his power.[citation needed]

With enough atium, a Mistborn with its future-seeing ability is almost invincible. At the time of the Final Empire, the only known way to counter it is to have more atium than your opponent. The result of an atium match is almost always fatal for the one with less amount of atium. Therefore, it is essential for the Noble Houses, especially the Great Houses with one or more Mistborn, to maintain a steady supply of atium. The atium has to be bought from the Lord Ruler with very high prices. Usually, the uncertainty of who has the more atium forms a balance of terror, making none of the sides dare to start burning atium.[citation needed]

The Lord Ruler Compounds atium to gain access to near-infinite amount of youthfulness. As he ages, he needs more and more atium to remain youthful.[26] It is unknown how much atium he eventually needs to consume at the last years of the Final Empire.

This article is still missing information. Please help The Coppermind by expanding it.
Retrieved from "https://coppermind.net/wiki/?title=Final_Empire&oldid=168827"
Categories: