The Ashmounts were enormous volcanoes in the Final Empire.[1]

They were created by Rashek during his initial contact with the Well of Ascension to counteract his moving the planet too close to the sun. They are the source of the ashfalls which protect the planet from overheating by filling the air with massive clouds of ash. Aluminum found on Scadrial came from the Ashmounts' craters.

While Ruin was free, he caused the Ashmounts to emit massively larger amounts of ash than previous times as part of his plan to destroy the world.

During Sazed's Ascension, he restored Scadrial to its original orbit, eliminating the need for the ashmounts. 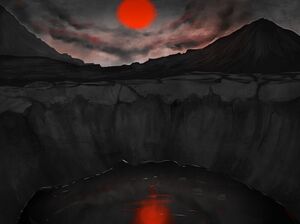 There were seven ashmounts in the Final Empire:

This article is still missing information. Please help The Coppermind by expanding it.
Retrieved from "https://coppermind.net/wiki/Ashmounts?&oldid=166625"
Categories: