The Steel Ministry is the religion of the Final Empire, made up of various divisions, named Cantons, that also serve as the government's bureaucracy. Obligator is the title for those who are part of the Ministry. It also contains the Inquisitors.

One of the main functions of the Ministry is to witness a myriad of contracts and agreements, even something as simple as promise to come to a game of shelldry.[1] The nobility pay them for their services in a manner similar to that of renting skaa.[2]

The Cantons were the subsections of the Steel Ministry. 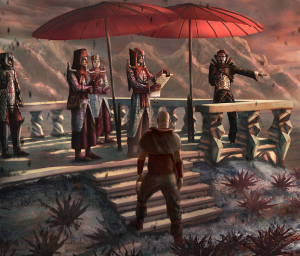 Organized the Steel Ministry and looked after the religious side of things. This Canton was the main bureaucratic division of the Ministry.[1]

As the authority in bureaucratic matters, any mercantile contracts, divorces, weddings, land purchases, inheritances and any other important dealings could only be authorized by the Canton of Orthodoxy. It was said if an obligator hadn't witnessed an event or sealed a document, it might as well not have happened or been written.[1]

The Canton's headquarters was an imposing building. It was tall and blocky with a massive rose window in the front, with two red banners hanging down beside the window, proclaiming praises to the Lord Ruler. Upon entering the building, one would find a desk at the end of an extended entryway, with an obligator manning the desk. Decorations within the building were sparse and lacking. It was often described as austere, bearing only the most necessary furniture and simple grey carpeting, the walls also lacking adornments. An exception to that rule was the waiting room. With plush chairs and lavish décor, the room clearly catered to the tastes of visiting noblemen. Snacks are also provided for those waiting, small cakes, for instance.[4]
The building was later used as assembly hall for the Luthadel Assembly, in a low-ceilinged space that looked like a large lecture room.[5]

There are many philosophers in the Steel Ministry and most end up in the Canton of Resource, the best place for those with analytical minds.[6] This Canton is tasked with trade, transport, and taxation. A big portion of the atium mined at the Pits of Hathsin is secretly transported by the Canton of Resource. Atium beads are disguised as and hidden in Ministry funds, since metal coins radiate powerful light in the Cognitive Realm, which keeps Ruin from noticing where the god metal goes.[7] It is also in charge of maintaining supply lines to the other Cantons, for feeding the people and maintaining the canals.[8]

During the Final Empire the Canton of Inquisition was run by the Steel Inquisitors, and acted as law enforcement, especially over the Allomantic community. Obligators of the Canton of Inquisition had the usual tattoos around the eyes, with the addition of a stark red line on the side of their face.[10] In addition to dealing with anyone that went against Ministry protocol, the Canton of Inquisition also had bases all around the city of Luthadel, called Soothing stations. These were to dampen the emotions of everyone in the area, calming and depressing them to preempt rebellion. In addition, many Inquisitors found skaa Mistings by installing Seekers in the Soothing stations.[10] There were between thirty and forty soothing stations around the city, each with three Soothers, a Seeker, and a Smoker to mask the Allomancy to anyone outside.[11]

By revealing that Vin was the daughter of the Lord Prelan Tevidian Tekiel, shortly before the death of the Lord Ruler, the Canton of Inquisition gained dominance over the other Cantons.[3]

The Conventical of Seran is a fortress of the Canton of Inquisiton, and may be the place where new inquisitors are created.[12]

During his argument with Elend, Aradan Yomen mentions how the Canton of Inquisition had been formed sometime during the sixth century, and it was this Canton which suggested the Terris breeding programs to the Lord Ruler in order to keep that population under control. The Lord Ruler agreed to it provisionally, and the programs were then kept until the collapse of the Final Empire. However, it is also mentioned that the subjugation of the Terris people had started far before the Canton of Inquisition had come up with the idea of the breeding programs.[8] 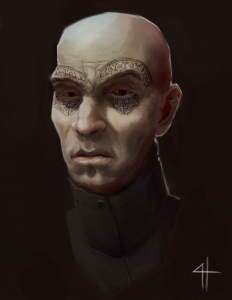 Obligators were distinguished by their shaved heads and intricate tattoos around their eyes to signify their rank and Canton membership.[13][10] They typically wore dark grey robes. The obligators would have to be called in to witness or approve anything significant going on in the Final Empire. They were required to practice their religion and maintain a religious air with devotion that was unnecessary for nobles. Part of those requirements were daily prayers and ceremonies to the Lord Ruler.[14] Obligators were allowed to marry.[15]

Each year, new Ministry acolytes are transported from a training facility in the northern part of the Empire to Luthadel. This was also when they would transfer large amounts of funds to Luthadel.[4]

There were also assassins in the Steel Ministry.[1] Any "legal" assassination in the Empire would have required the Ministry's approval through bribery.[17] The Ministry has its own assassins who kill any who are outspoken or too successful. [1]

In the year 1022, the Ministry is presided over by Lord Prelan Tevidian. The Canton of Orthodoxy was the currently leading Canton. After members of the Canton of Inquisition capture Vin and prove that she is the Lord Prelan's half-breed daughter, they gain control of the Ministry.[3]

The Steel Ministry doesn't exist in its former state following Sazed's Ascension. There are echoes of the organization left, but most of the Steel Ministry is gone because at that time, the leaders are the members of Kelsier's crew. There were a few notable obligators who made it through the Catacendre and they left their own marks. Some cities have more of an influence from the Ministry than others.[20] There is a Canton of Cartography in Elendel.[21] There is also a road named Canton Avenue in one of Allomancer Jak's stories, likely based on a real street in Elendel.[22] "Cantonesque" architecture is described as having long flights of steps and stained-glass windows.[23]

The Steel Ministry was notorious for taking bribes. It functioned similar to being its own noble house, with contracts and agreements to gain wealth and leverage. Corruption was commonplace during the Final Empire.[17] Rising through the ranks of the Ministry was very influenced by Allomantic abilities. Those with abilities, especially with metals judged to be valuable, rose quickly and were placed in positions of power.[24] Atium mistings were one of the most valuable. In order to search them out and recruit them, Inquisitors would put trace amounts of the godmetal into the nobility's drinks at balls periodically. They would then cause a disturbance while burning bronze to seek out those who began to burn the metals instinctively. When someone joined the Ministry who was not already a Misting, they would unknowingly be given a larger amount of atium and forced through a series of rituals designed to drain the recruit physically so his body would Snap and reactively burn the metal.[25] Both men and women could be part of the Steel Ministry and some women even became Inquisitors.[26]

Seekers are sought out diligently by the recruiting obligators.[10] Noblemen would address Inquisitors, and presumably obligators, as "Your Grace".[27] There was a long standing rivalry between the various Cantons for control of the Ministry.

Daily prayer was a facet of the religion.[14] There is a ritual that involves an altar made of gold. It is centered in a room with four candelabra at the corners. Near the altar, Alendi's journal, written in Khlenni, was kept. Near the doorway, a bowl of small, triangular knives was kept on a pillar to be used in the ritual.[28] The knives were occasionally used for the worshipper to slice their own body.[14] Marsh later uses these triangle knives as a weapon of choice. The Ministry teaches the basic doctrine that the nobility has prestige and allomancy because of their ancestors' loyalty to the Lord Ruler, while the skaa were punished for the sins of their own ancestors. The Mistborn are taught to be descendents of the only men who supported the Lord Ruler before his Ascension.[29][30] The Lord Ruler is revered as the creator and savior of the world, the Sliver of Infinity.[31] His status in the religion is as a piece of God, not omnipresent or omniscient. He's a physical, independent section of a consciousness.[32] Before his Ascension, he was only a mortal man.[33] He is taught to have saved the people from the Deepness and punished their lack of faith with the ash and mists.[34]

The Ministry's position on sexuality was dependent on how much they were paid.[35]

Skaa and nobles alike were required to fulfil their roles in the Empire and obey the Lord Ruler, but neither devotion nor faith was requested. Skaa aren't taught much of the Ministry's doctrine.[30] Weddings were characterized only by the presence of an obligator to witness the fact. Sometimes additional ceremonies would be added, but there wasn't a standard; the obligator's presence was the only requirement.[16] Worship of any other god was forbidden. [36]

Obligators were originally just called priests and the Steel Ministry was called the Steel Priesthood, but when Brandon decided they would be bureaucrats, he wanted a new name for them. A member of his writing group, Nate Hatfield came up with the term "obligator" from a thesaurus.[37][38]

This article is still missing information. Please help The Coppermind by expanding it.
Retrieved from "https://coppermind.net/wiki/?title=Steel_Ministry&oldid=116501"
Categories: