Tresting was the master of a plantation in the Central Dominance north-west of Luthadel. His staff at the plantation included other lords and at least two minor obligators, as well as a number of taskmasters and over two dozen soldiers. His plantation was manned by a workforce of several hundred skaa.[2]

He was described as efficient and productive. He kept his skaa in line with the whips of the taskmasters and the threat of having whole families executed. Some skaa did try running away shortly after he inherited the land from his father, but the slaughter of their families discouraged any further departures.[2]

Tresting was a law-abiding noble, although he gets chills at the thought of the Canton of Inquisition investigating his operations. He liked to "dally" with skaa women periodically, but culled those he chose within a few weeks to avoid any mishaps. He had heard stories of the Steel Inquisitors, and he has no desire to meet one.[2] 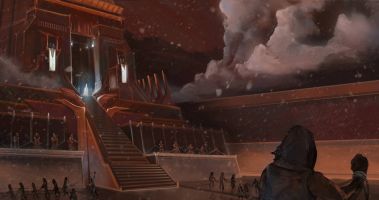 Tresting purchased a fine suit and vest from the capital and had it shipped out on the canals. He is concerned with being able to present himself well; however, he also keeps a "mundane" pantry, indicating a thrifty nature.[2]

Lord Tresting briefly entertained Straff Venture's personal obligator at his plantation manor, and was promised a favorable report in Tresting's upcoming contract with House Venture. He was distracted from his guest by a skaa in the fields staring at him and smiling, and when he called for taskmaster Kurdon to take care of the problem, the offending skaa had vanished.[2]

This minor event did not deter him from choosing Jess's daughter as his reward for a successful day of business, and that choice became his undoing. Kelsier took the opportunity to kill the entire noble population of the manor and burn the building to the ground.[2]

This page is probably complete!
This page contains most of the knowledge we have on the subject at this time.
It has yet to be reviewed.
Retrieved from "https://coppermind.net/wiki/?title=Themos_Tresting&oldid=143150"
Categories: