The most notable feature is the large steel spikes where their eyes should be. These spikes fill the eye socket and protrude out the back of the head several inches. Steel Inquisitors, like the obligators from which they were created, are bald with a large number of tattoos spreading from their eye sockets across their head. These tattoos indicated many things including rank and what kind of Allomancer they were before recruitment. The Lord Ruler's steel Inquisitors have eleven spikes in all--two through the eye sockets, one in the middle of the spine on the back, and eight--one for each known Allomantic power--in the torso.

Although created from humans, they were physiologically and mentally distinct.[1][2] They could, however, still mate with humans.[3] Children from Steel Inquisitors are more likely to have Allomancy compared to children from two humans, but the strength of Allomancy and Feruchemy would still weaken over time.[4][5] There are also complications that can happen with the children of an Inquisitor.[4] Steel Inquisitors have slightly longer lifespans compared to humans.[6] 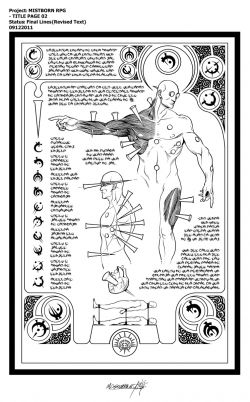 To create an Inquisitor, metal spikes are inserted at various points in the subject's body by hammering the metal spike through the heart of a Misting or Feruchemist into the new Inquisitor; this reduces the loss of power through the Hemalurgic process, due to the spike spending a minimal amount of time outside of a body. These spikes, now Hemalurgically charged, tear into and forcibly splice information from the victim to the subject's Spiritweb. This process moves vital organs, allowing the spikes to be inserted practically anywhere without fatally wounding the subject.[10] The process is not painless for either person involved, as both violent changes to the Spiritweb and having metal spikes driven into one's body causes pain. The steel spikes inserted into eye sockets allow the Inquisitor to navigate via the blue Allomantic lines from the traces of metals in everything. The spikes create a chain in an Inquisitor's body, and there is a central spike or linchpin spike that acts as a connector to the lower and upper spikes. If this spike is removed, the Inquisitor dies. A linchpin is needed to avoid deadly side effects if four or more spikes are used on an Inquisitor.[11]

Creating an Inquisitor bestows many Allomantic and some Feruchemical abilities to the subject, on top of the Inquisitor's own natural Allomantic powers, meaning any abilities the subject had prior to the transformation are augmented by the spikes. As such, Mistborn and Seekers were the preferred subjects, as their increased Seeking ability would allow them to pierce copperclouds.[12][13]

There of forty seven total bindpoints that can be used for an Inquisitor. Eleven are physical, twelve are mental, twelve are temporal, and twelve are spiritual.[11] There are no differences in bindpoints between males and females.[14] If a Steel Inquisitor would want every base power for both Allomancy and Feruchemy, thirty two spikes would be needed, leaving room for fifteen extra spikes.

Steel Inquisitors were very powerful and - with Feruchemical healing - nearly invincible. Rumors in the skaa underground held that Inquisitors were immortal, that they could see into people's souls and that they were warriors with no equal.[18] However, removing spikes from an Inquisitor could effectively kill it, most notably the linchpin spike located between the shoulder blades. This was a weakness built into them by The Lord Ruler. Similarly, Inquisitors could not survive a beheading. Removing one eye spike is not enough to kill most Inquisitors. Inquisitors also require much more rest and sleep than a normal human would.

Another major weakness in Inquisitors came from the Hemalurgic spikes they bore, though this was not a problem before Ruin was released. Any spike in a person allows for influence to be more easily pushed on a person via the tears in their Spiritweb. These tears allow for people to control a Hemalurgic construct using Allomancy. This weakness is also present in both kandra and koloss. This also allowed them to be controlled by Ruin - the more spikes they had, the greater the weakness was. However, the stronger a creature's will, the more it can resist that influence or even break free from it for a time. Because of their Hemalurgic origins, all Steel Inquisitors were able to hear the voice of Ruin. 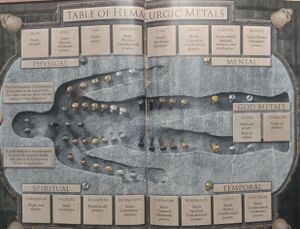 by Isaac Stewart
Possible bind points and abilities for Inquisitors [11]

All Inquisitors exhibit a high tolerance to pain and most forms of physical damage. Depending on which Hemalurgic spikes the Inquisitor had, their abilities could vary immensely. Not all Inquisitors had an atium spike, nor could all of them tap health. During the time of Kelsier, however, most had those spikes.

The Inquisitors' spikes were melted down by Harmony to make earrings, and given to members of the Path by assorted Kandra. MeLaan gave Waxillium Ladrian his earring.

Inquisitors are often depicted as ravens in artwork and are known as the Lord Ruler's wraiths.[20]

This article is still missing information. Please help The Coppermind by expanding it.
Retrieved from "https://coppermind.net/wiki/?title=Steel_Inquisitor&oldid=126284"
Categories: