“I did not make a mistake. I have never made a mistake. However, it is time for a change. ”

Rashek is a Terrisman from Scadrial. Known as the Lord Ruler, the Sliver of Infinity and the Father, he has access to the full range of abilities of both a Feruchemist and an Allomancer, and has Hemalurgic spikes in his body. As a result, he is an extremely powerful Compounder, and he was able to unify much of the world into an empire that lasted for one thousand years. 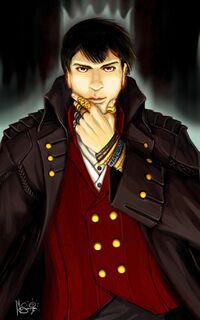 Rashek is incredibly tall and handsome. He has pale skin and has black hair. He wears black and white clothing that resembles an exaggerated nobleman's suit, with a coat that runs down to his feet and trails behind him and a black vest accented with white markings. He also wears several rings, both as show of his strength and as Feruchemical storage.[5]

He enjoys playing and listening to music and keeps a small wooden flute among his Terris relics.[6][7]

Prior to his Ascension, he disliked the people of Khlennium, and was hostile and angry towards them, despite never having been to the state, because of their oppression of the Terris people.[8][9] Though he hated them, he also envied several aspects of their culture, later incorporating them into the culture of the Final Empire.[10][11]

Towards the end of his life he grew extremely weary of the world and appeared resigned in almost every interaction he had with others, likely due to his immense age rendering every experience trivial and taxing.[12] Rashek treated those who stood against him with disdain and was unconcerned when a rebellion was approaching his palace, instead finding it annoying that he would have to go through the trouble of killing hundreds of skaa personally.

Rashek is born with the powers of a full Feruchemist. During the first Ascension he rebuilt himself to be an extremely powerful Mistborn. In addition to this, he has Hemalurgic spikes, charged with unknown attributes.[13] With a combination of all three Metallic Arts, he is able to Compound all sixteen metals and pull off his most impressive abilities. Rashek has used his metals enough to become nearly a savant, if not a full savant, in every area.[14][15]

By Compounding steel, tin, and pewter, he possesses unparalleled speed, strength and enhanced senses. He can influence the emotions of over ten thousand people with zinc and brass. With his compounded copper, he has a flawless memory. His power allows him to easily pierce copperclouds and Push and Pull on metal in human bodies. He could increase the Power of his ironpulling and steelpushing by increasing his weight with his ironminds.

By Compounding Feruchemical gold and Feruchemical atium, he effectively made himself immortal. However, as he aged, he required more and more stored youth to keep himself alive, and he would have eventually had to resort to other means to retain his immortality. Using the Well of Ascension also made Rashek a Sliver of Preservation.

Rashek has musical abilities and plays the flute.[6] 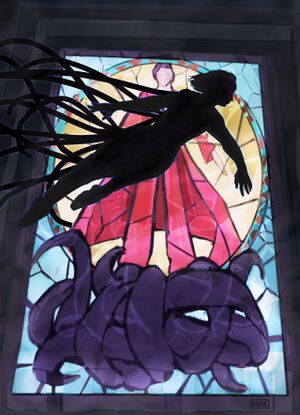 Rashek was part of a growing number of young Terris who had more violent attitudes than was seen as typical of their people. They believed that their Feruchemy should have been put to greater use than it was as a tool for simple labour. Alendi believed Rashek and his fellows to be dangerous, given the opportunity.[2]

Rashek believed that Alendi was not the true Hero of Ages, and was resentful of him.[16] He thought that an outsider -- someone not pure Terris, as well as an oppressor of Terris -- could not be the Hero, and that Alendi had tricked the Terris philosophers.[17][9] He led Alendi to the Well of Ascension and killed him, under instructions from his uncle, Kwaan. He was ignored by Ruin up until the moment he murdered Alendi.[18] He then took and used the power of Preservation, ascending to become the Lord Ruler.

As Rashek was using the power of the Well, he changed many aspects of life on Scadrial, in order to save the world from the Deepness. Many of his changes, however, created even more problems that needed to be addressed. He moved the planet closer to its sun in an attempt to burn the mists away. The new orbit was too close to the sun, and he created active volcanoes to produce large amounts of ash and smoke to cool down the world.[19] The climate of ceaseless ashfalls required some mechanism to break down the ash, that the world did not suffocate on it, so Rashek altered the plant life to be able to survive the ash and created microbes to break it down. However, that was still not enough to save humanity. Rashek altered the physiology of humans on Scadrial to be able to survive the ashfall.[20][21]

Further alterations to the world and humanity were made to secure his rule over the world. The original Terris mountains were flattened, and new mountains were raised in the north in an area which he renamed Terris in order to hide the location of the Well of Ascension.[22] While he had adapted humanity to the ash, he made other changes, creating the nobility and the skaa of the Final Empire with slight alterations to their physiology. The nobility he made taller, stronger and more intelligent, but less fertile. The skaa he made more fertile, shorter and hardier.[23]

He offered his friends a choice to make on behalf of all living Feruchemists, to transform them into mistwraiths. His friends he further transformed into kandra to allow them to retain their minds and their memories. In this process, he failed to account for Feruchemy genes still dormant in the Terris population, an oversight which allowed more Feruchemists to be born into following generations.[24]

Though he had already created the kandra in his Terris friends, he gained much knowledge of the three Metallic Arts in the brief moments he held the power of the Well. With his knowledge of Hemalurgy, he was able to create koloss and Inquisitors. Despite all the knowledge gained from his holding the power of the Well, in a thousand years he was unable to create more than the three Hemalurgic constructs which he had already created.[25][26]

Finally, he rebuilt himself to be a Mistborn, rather than ingesting one of the beads of Lerasium at the Well of Ascension.[27] He was aware of the possibility of life on other planets in the cosmere, but had no interest or experience in leaving Scadrial. If he so wished, he could have left Scadrial during his Ascension.[28]

With the last of his power, Rashek created a replica of his old hut within Kredik Shaw over the Well itself as a place of retreat for himself.[22] 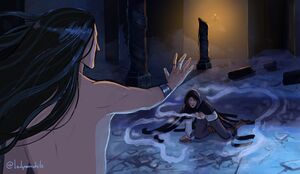 He formed the Final Empire, partly as a means of revenge against the people he viewed as encroaching on Terris land,[29] and conquered the whole of the world. He was obsessed with order, and he subjugated all but eight foreign kings, whom he made Mistborn and allowed to rule over the masses.[30][31] In his early reign, he erased all knowledge of the religion of Terris. He also destroyed technologies that he considered dangerous, like gunpowder.[32] He made use of both Allomantic and Feruchemical powers in order to Compound to keep himself alive. Rashek was also called Sliver of Infinity by the people of the Final Empire.[33][34][35] This was due to worldhoppers recognizing him as a Sliver.[36] Rashek formed the Steel Ministry, a religion that worshipped him as a god and banned all other religions. The followers of the religions who did not voluntarily dissolve were hunted down and destroyed. The last religions were destroyed about five hundred years after Rashek's Ascension.[37]

Rashek said his empire lasted a thousand years. More specifically, it had lasted 1024 years.[38] During this time, he allowed almost no technological progress. He once gave up and tried to end the Final Empire.[39]

He had several children, who had some relation to his attempt to end the Final Empire. His children mixed among the population, and post-Catacendre, he still had living descendants.[40][41][42][43]

As a result of the revelations from the Well of Ascension, Rashek gained a profound understanding of the Deepness, as well as Scadrial's Shards, Ruin and Preservation. This led him to have storage caches constructed throughout the Final Empire, five in total, each containing a large supply of food and basic necessities as well as information about Allomancy and the weaknesses of his Hemalurgic constructs. The text was inscribed on metal plaques to prevent their alteration by Ruin. It is from these storage sites that Vin and Elend learn about electrum and malatium, although they had already discovered and utilized aluminum and duralumin.[44][45][46][4]

Only a few years before the Well of Ascension was due to refill, Vin killed him using the power of the mists, after his own powerful steel push ripped her Hemalurgic earring free, allowing her to access Preservation's power and use her newfound strength to remove his atium bracers. His death led to the Collapse, and the end of the skaa rebellion.[47]

Time In the Cognitive Realm[edit]

“Only a year left. So close. I would have again ransomed this undeserving planet. ”

—Rashek to Kelsier and Leras[48]

A Sliver of Preservation due to his time holding the power of the Well, Rashek did not immediately pass on to the Beyond after his death. Once his spirit manifested in the Cognitive Realm, he went to the location of the Well where he found Kelsier and the remnants of Leras. He spoke briefly to Kelsier, dismissing him and Leras as impotent annoyances. Rashek was annoyed that he had been killed before he had been able to collect the power of the Well a second time. Kelsier attempted to confront him about the source of his powers, while Rashek touched the power emanating from the Well, examining it before disdainfully stating that he would not remain behind in their company and departing for the Beyond.[48] 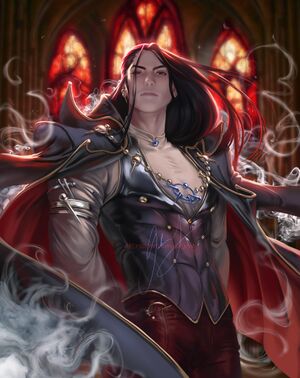 by Gar_leyva
The Lord Ruler

“My lord, look outside your window! Do we not have better things to discuss? The entire city is in rebellion! Skaa torches light up the night, and they dare go out into the mists. They blaspheme in riots, attacking the keeps of the nobility! ”

—Tevidian arguing against Rashek about the skaa rebels[4]

“You don't know what I do for mankind. I was your god, even if you couldn't see it. By killing me, you have doomed yourselves... ”

“He suffered much beneath Ruin's hand, but he was a good man, who ultimately had honorable intentions. ”

—Sazed on Rashek's corruption by Ruin. A note on the reverse of the flower picture in a book written by Sazed after his ascension.[50]

This article is still missing information. Please help The Coppermind by expanding it.
Retrieved from "https://coppermind.net/wiki/Rashek?&oldid=176944"
Categories: