This page or section contains spoilers for The Lost Metal!
This information has the ability to potentially ruin elements of the plot for the reader. Proceed with caution if you have not read this book.
This page or section needs to be updated with new information for Rhythm of War and The Lost Metal!
Be aware that in its current state, it may not include all additional content yet.
This article is about the entire Cognitive Realm, informally known as Shadesmar. For the region that coined this term, see Rosharan Subastral.

“All things have three components: the soul, the body, and the mind. That place you saw, Shadesmar, is what we call the Cognitive Realm—the place of the mind. ”

The Cognitive Realm, known colloquially as Shadesmar is the realm of thought or of the mind.[2] It contains the Cognitive aspects of both living and non-living things and can be accessed via perpendicularity. On at least one planet, the deceased appear in the Cognitive Realm before passing on to the Beyond. The Cognitive Realm, along with its counterparts, the Spiritual Realm and the Physical Realm are studied together as part of Realmatic Theory.

The Cognitive Realm exists as a connected plane that is heavily distorted based on the presence of cognitive thought.[6][7] The Cognitive Realm is split into sections known as subastrals that reflect to corresponding planets in the cosmere. These subastrals can be reached from their neighbors, making worldhopping and interworld trade possible.

Parts of the Cognitive Realm that are reflections of planets are called subastrals.[2] 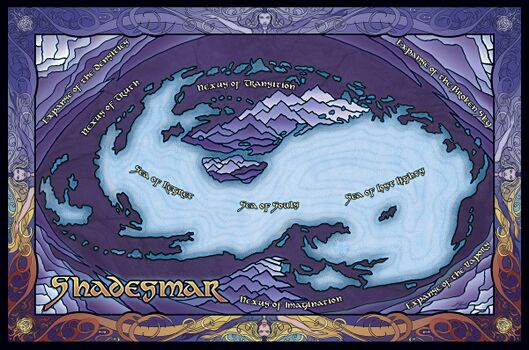 Shadesmar is a bustling land and home to the spren. Shadesmar is composed of an inverted ocean made of beads that represent the souls of Physical Realm objects, while living souls from the Physical Realm are represented by flames. There is a thriving society that lives in the area with both spren specific and mixed spren cities being found in the region. Humans can also be found living in Shadesmar however they are rarer and are more commonly travelers. Trade is common between Rosharan's and off worlders, with goods being bought and sold using the local investiture, Stormlight. Relations, however, between spren and humans are not always positive with many spren treating humans poorly due to the lingering effects of the Recreance on their peoples. As well as this, several factions, including Odium's Forces and the Ghostbloods became active in the area c. 1174. Odium's forces have worked to gain influence over the Realm, while the Ghostbloods have sought to build a network for Stormlight trade off world.

The Scadrian subastral is also known as the Expanse of the Vapors[8]. This region is characterized by its misty environment, with all objects from the Physical Realm appearing as misty figures. Like with the Rosharan subastral, bodies of water in the Physical Realm reflect as rocky shores, while the ground appears as a misty liquid. Living beings, as well as all metal, glow brightly in the Cognitive Realm, to the point that they can mask objects in the Physical Realm if concentrated enough.[9]

Worldhoppers have been known to travel by boat across the misty fluid of the Scadrian Cognitive Realm,[10] but Cognitive shadows, Shards, and the souls of the dead appear capable of walking on the fluid. It is not known whether such beings can also walk of the Cognitive seas of other worlds.

The Selish subastral is also known as the Expanse of the Densities.[11][12] Due to the Splintering of the local Shards, and subsequent locking of those Splintered bodies in the Cognitive Realm, the Selish subastral is uninhabitable, as the Shardic substance has formed into a highly pressurized plasma-like storm known as the Dor.[13][14][15] This makes the Cognitive Realm on Sel extremely dangerous as anyone who comes there unprepared would be ripped apart by the power of the Shards.[16] It is possible to pass through the Dor and survive, though by what means it is unclear.[17][18][19]

Other regions that can be found in the Cognitive Realm include;

The Cognitive Realm looks different on every planet, with its traits partially influenced by perception,[23] and although the composition of each subastral differs, there are certain shared characteristics between the different parts of the realm. The landscape is also not fixed - as it is a reflection of the Physical Realm, changes in that Realm, such as a body of water getting filled in with dirt, will be reflected in the Cognitive Realm, albeit with a delay.[24] 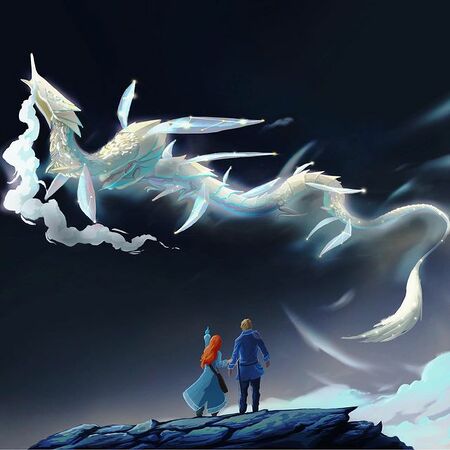 The sky in the Cognitive Realm is pitch black[33] with no moon or stars.[34][6] On the horizon sits a small, frail,[6] white sun,[35][1] that provides enough light to illuminate the lands but not the sky, despite appearing almost too weak to achieve even this.[6] The sun does not move or change regardless of time of day or distance traveled - because of this, the Cognitive Realm does not have any natural day and night cycle.[36][34][37] On some worlds, clouds create certain formations which they strictly hold to, however this is not the case for all worlds.[38][39] It has a natural, breathable atmosphere due to air permeating into the Cognitive from the Physical Realm.[40]

Shadows behave strangely in the Cognitive Realm, depending on the source of light that is creating them. Shadows cast by the sun will point towards it instead of away,[33][6] while those cast by manifested fire will point away from the light source as would occur in the Physical Realm.[17] Backward shadows occur on rare occasions in the Physical Realm, and are related in some way to the Cognitive Realm.[43][38][44]

There is a variety of planet life that blooms in the Cognitive Realm, although its substance differs between planets. Plant life blooms on the inverted ground of the Cognitive Realm as it corresponds to bodies of water. On some subastrals, water in a cup in the Physical Realm is enough to allow the plants to bloom.[45]

Living beings reflect in the Cognitive Realm in some manner.[33][39] If someone is to die in the Physical Realm, their soul will disappear. In some subastrals they may appear briefly in the Cognitive Realm before passing onto the Beyond, although this does not appear to be the case on all planets.[46][47] Through Investiture, a soul can last longer in the Cognitive Realm, and some even hold on long enough to be considered Cognitive Shadows, souls that fail to pass on and are stuck in the Cognitive Realm. Similar to objects, touching a person will give the impression of the person it represents and it is possible to feel their emotions and general thoughts.[46]

This article is still missing information. Please help The Coppermind by expanding it.
Retrieved from "https://coppermind.net/wiki/?title=Cognitive_Realm&oldid=171875"
Categories: